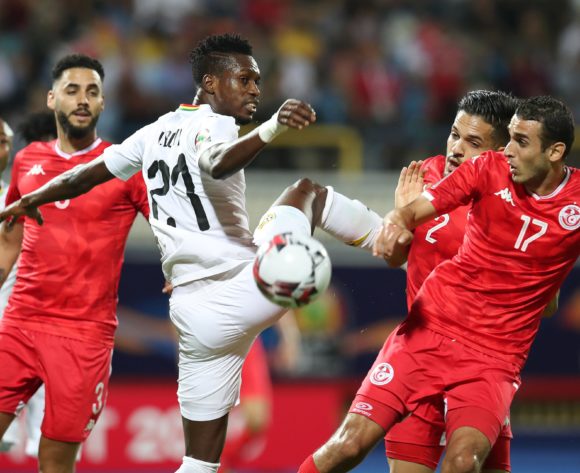 John Boye of Ghana challenged by Ellyes Joris Skhiri of Tunisia during the 2019 Africa Cup of Nations Last 16 match between Ghana and Tunisia at the Ismailia Stadium, Ismailia on the 08 July 2019 ©Muzi Ntombela/BackpagePix

Weeks after Ghana’s painful elimination from the ongoing Africa Cup of Nations, Black Stars defender John Boye has disclosed how the players reacted after the loss against Tunisia.

The Black Stars quest to end their 37-year title drought was quashed following a 5-4 penalty loss against the Carthage Eagles of Tunisia in the Round of 16 stage at the ongoing AFCON in Egypt.

In the wake of the defeat, Mubarak Wakaso, who was arguably Ghana’s best player at the tournament, was videoed sobbing as he received his his Man of the Match accolade.

However, Boye says it was not only the Deportivo Alaves midfielder who was deeply touched by the defeat.

The FC Metz guardsman revealed that every member of the team shed tears after realizing how they have disappointed the nation.

"Everybody was crying. Everybody cried like we are all disappointed but we have to raise our heads and make Ghanaians happy next time,” Boye said as quoted by Saddick Adams.

Ghana were seeking to end their 37-year wait for continental success, having won their last title in 1982.

Kwesi Appiah's side came close to ending their drought at the last six tournaments, having reached the semi-finals, and even going as far as the final in 2010 and 2015.

It is however unclear if Appiah will remain in the dugout for the next AFCON which will be hosted by Cameroon in 2021, as there are several calls from football advocates to axe him from the post following the team’s failure to clinch this year’s trophy.