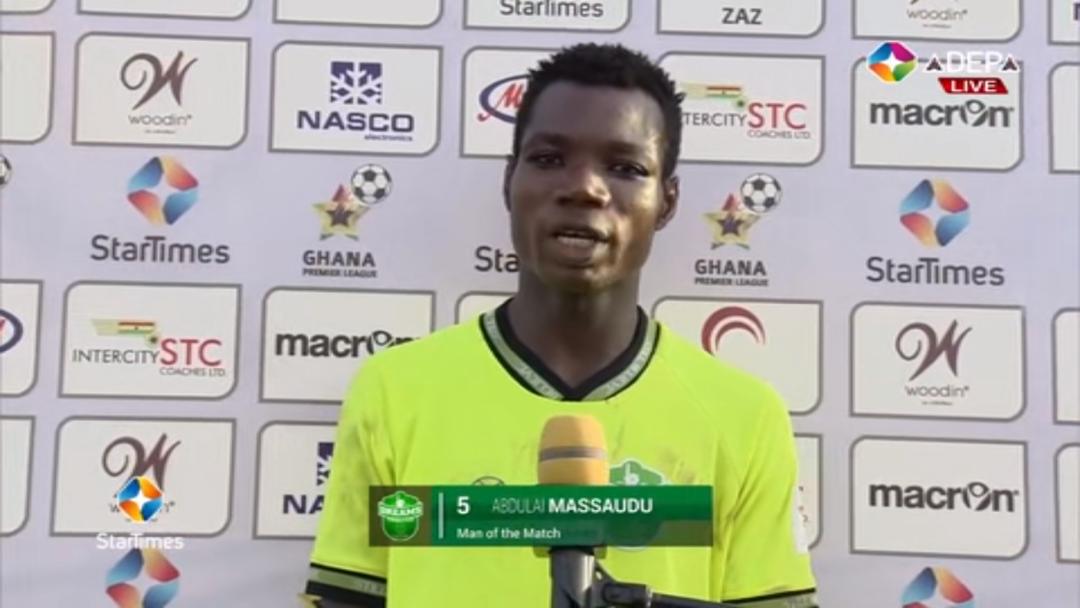 Dreams FC defender Abdulai Massaudu was named best player in the 2-0 win over Hearts of Oak on Sunday.

Massaudu was a stalwart at the back and denied the Phobians from taking the lead in the first half with a goal line clearance.

The Still Believe Lads punished the visitors minutes after Nuru Sulley collected a second yellow card to take an early shower in opening nine minutes of the second half.

In the opening minutes Ibrahim Issah benefitted from a miscommunication at the back by the Phobians but could not make it count.

After a first quarter, Ali Huzaif found striker Agyenim Mensah with a beautiful pass but the latter's long-range effort was saved by Ben Mensah, the Hearts goalkeeper.

Before the half-time whistle, a beautiful team effort from the right saw the ball drop on Emmanuel Ocran's left foot but his strike deflected for a corner. The resulting corner is cleared out of danger.

Six minutes into the second half, Hearts were reduced to ten men when defender Nuru Sulley got sent off for a second yellow card offence.

From the resultant free-kick of that infringement, Dreams FC took the lead then Huzaif bundled home a rebound after Mensah had spilled his powerful header.

Just after the hour mark, Victor Oduro unleashed a thunderbolt but his effort at goal lacked direction.

Hearts closest attempt to snatch the equalizer was in the 68th minute when William Dankyi raided the left and whipped in a cross from the left back captain Fatawu shockingly shot wide from inside the box.

Dreams could have scored the second goal in late on but Sylvester Simba had his shot at goal deflected by Fatawu Mohammed for a throw-in.

In injury time, substitute Simba picked up a loose ball from the close to the corner flag on the right, raced with it and then delivered a low one which beat goalkeeper Mensah at the near post.