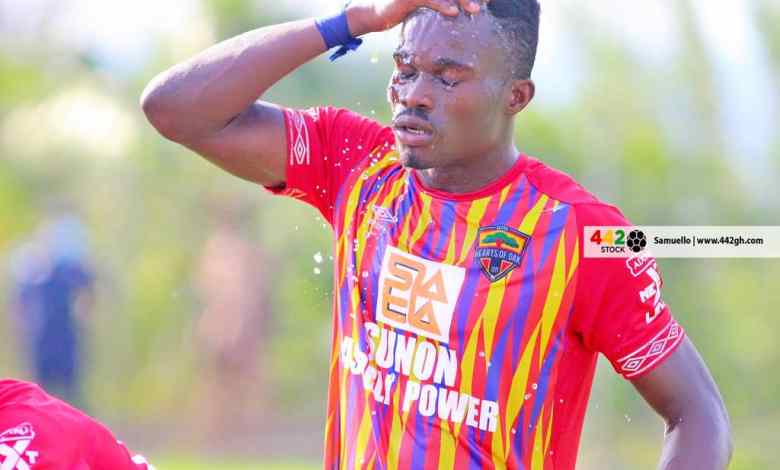 Hearts of Oak saw off Eleven Wonders FC to make it four consecutive victories in the Ghana Premier League on Friday at the Ohene Ameyaw Park in Techiman.

The vital 1-0 win sees the Phobians achieve four wins on the trot for the first time this season.

The Rainbow club leapfrog bitterest rivals Asante Kotoko SC to go top of the premiership standings for the first time this campaign as they open a one-point lead.

Hearts' stay on the apex of the log could be temporarily since Asante Kotoko play WAFA SC on Saturday and win will see the Porcupines back on top of the table.

Wonders trainer Ignatius Osei-Fosu made five changes to the team that was beaten 2-0 by Karela United FC last Sunday in Anyinase.

They replaced Prince Baffoe and Samuel Boakye in the starting lineup respectively with Frank Amankwah also taking the place of Abdul Ganiu Abass.

Suspended Larry Sumaila made way for the return of captain Abdul Fatawu Mohammed at the right back role.

The Phobians got their noses in front in the 26th minute after breaking the game's duck through Kwadwo Obeng Junior.

Obeng Junior pounced on a miscommunication between Tetteh Nortey and his goalkeeper Abdulai Ibrahim to slot home match winner.

Both teams tried to score in the second half of the encounter but none of their efforts could result in goal.

Hearts will return to Accra to take on regional rivals Liberty Professionals in the FA Cup round of 64 next week.

Wonders travel to Dormaa Ahenkro to take on Aduana Stars also next week.