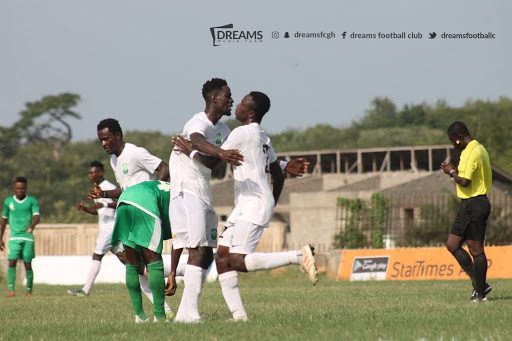 Dreams FC head to Elmina for their matchday 11 encounter against Sharks with their confidence high after thrashing Liberty Professionals 4-1 at the Dawu Theater of Dreams last weekend.

Meanwhile their opponents, Sharks ended a run of three draws with victory over Bechem United last Sunday at the Nduom Park.

The Nduom Park remains a fortress for the 'Ndoum boys' who are yet to lose a game at home this season, having picked valuable points against heavyweights Aduana Stars and Hearts of Oak at their own backyard.

However, Dreams FC's have lost only two games on the road, suffering a 2-1 loss at Karela United and a 3-0 thumping in Accra against Hearts of Oak.

Under new manager Vladislav Viric, the Eleven is to One boys are yet to lose a game.

But coach Yaw Acheampong and his charges will be looking at preserving their unbeaten home record.

Elmina Sharks will be without midfielder Benjamin Arthur who is leaving the club following the expiration of his contract.

Benjamin Tweneboah and James Bissue will be expected to deliver the goods for the home side.

On the other side, Joseph Esso and Agyenim Boateng's partnership could wreck havoc on any team on any day.

In the last three meetings between the two clubs, there's been a win a piece and a draw.