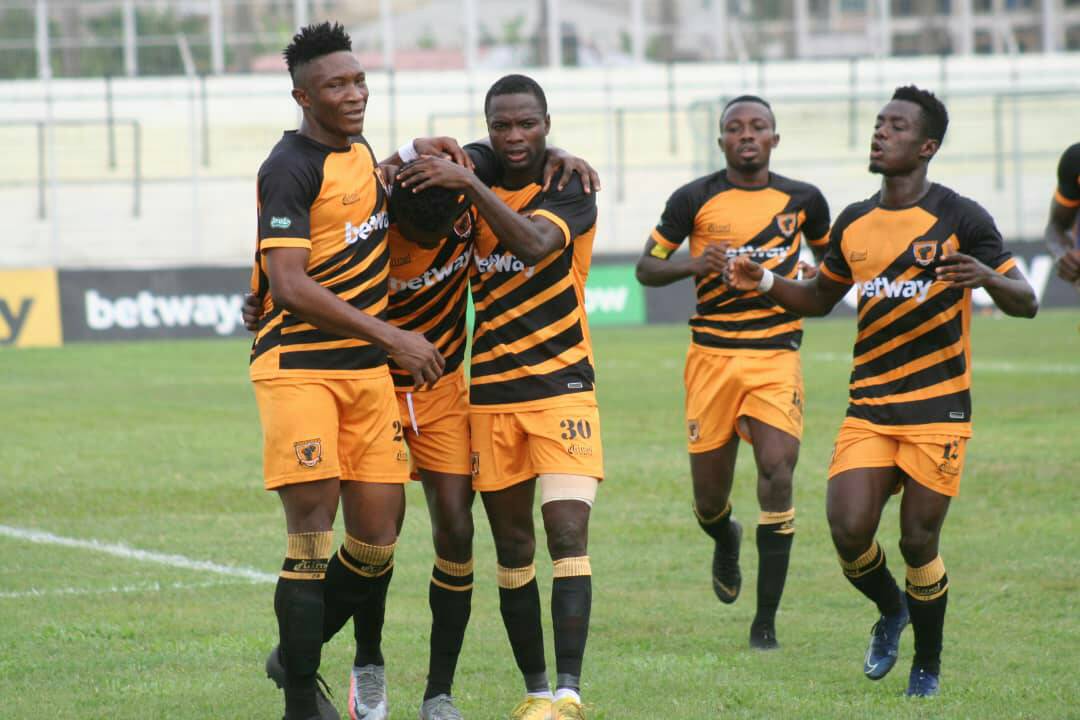 AshantiGold SC face a stern test on Saturday when they welcome in-form Hearts of Oak to the Len Clay Stadium in Obuasi in a matchday 19 Ghana Premier League fixture.

The Miners have been in tough times since 10 January 2021 where they beat Great Olympics 2-1 in Accra.

AshantiGold have managed only one win in ten premiership matches since that time and have dropped to the bottom half of the standings.

The Gold and Black outfit are at the 12th position on the log with 23 points from 18 games.

AshantiGold have recorded just one win in the last four games at the Len Clay Stadium but have lost once at same venue this season.

Seth Kwadwo Osei scored in his first start for AshantiGold last Sunday when they drew 1-1 with Karela United.

He is expected to keep his place in the starting lineup against the Phobians.

Top marksman David Abagna Sandan and Yaw Annor are all expected back in the team to face Hearts.

New gaffer Roman Folz should have his working permit to allow him sit at the dugout for Saturday's crucial duel.

Hearts are presently enjoying life under Samuel Boadu who took over the coaching role in about a month ago and has guided the club to back-to-back victories.

The Phobians beat WAFA SC and Aduana Stars where have scored six goals and have conceded none in the process.

Boadu and his guys are poised to keep the momentum going as they travel to Obuasi to take on AshantiGold.

Hearts are on a six-game undefeated streak (four wins and two draws) with their last loss dating back at 4 February 2021.

They are currently placed at the 4th position on the league standings with just three points behind leaders Olympics.

The Rainbow team is having a rollercoaster form at away in the league this campaign having won twice, drawn three and lost three in eight outings.

Hearts have not lost to AshantiGold in Obuasi since 27 October 2013 where they have won all of the last two visits.

Goalkeeping duo Richmond Ayi and Richard Attah were out of the last game against Aduana due to injuries.

They are expected back in the team for the trip to Obuasi.

Boadu goes into the game without the services of midfielder Nurudeen Abdul Aziz who is nursing an injury.