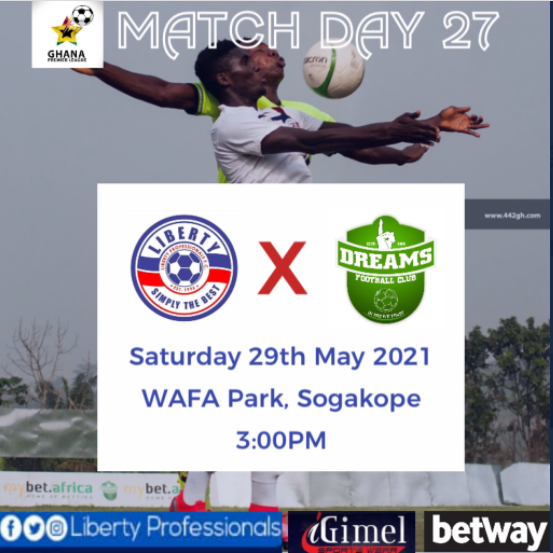 Liberty Professionals go in search of a win against Dreams FC on matchday 27 fixture at the WAFA Park in Sogakope.

The scientific soccer lads lost away to Ebusua Dwarfs in last weekend's round of fixtures at the Cape Coast Sports Stadium to drop to the relegation zone.

Liberty Professionals are yet to lose a game at the Sogakope Red Bull Arena since relocating to the venue.

Coach Sellas Tetteh who has been appointed to help the team escape relegation will have to mastermind a win against Vladislav Viric's side in this encounter.

Meanwhile, Dreams FC recorded a 2-1 home win against Bechem United on matchday 26 at the Theatre of Dreams.

The side has been impressive under coach Vladislav Viric and will head into the game with a lot of confidence.

The Still Believe club is currently placed sixth on the league table with 41 points.

It will be a tricky fixture for the two sides as Liberty Professionals are keen on picking the three points to avoid relegation.

Dreams on the other hand are looking to close in on the top four.

Elsewhere, Bottom-placed Inter Allies should avoid defeat on Sunday to keep their chances of survival intact – as they come up against third placed Medeama SC. The mauve and yellows lost 2-1 in their last visit to Dawu when they played Dreams FC in November.

The Tarkwa based side have won three, lost two and drawn one in their last six matches and sit third in the table with 43 points.