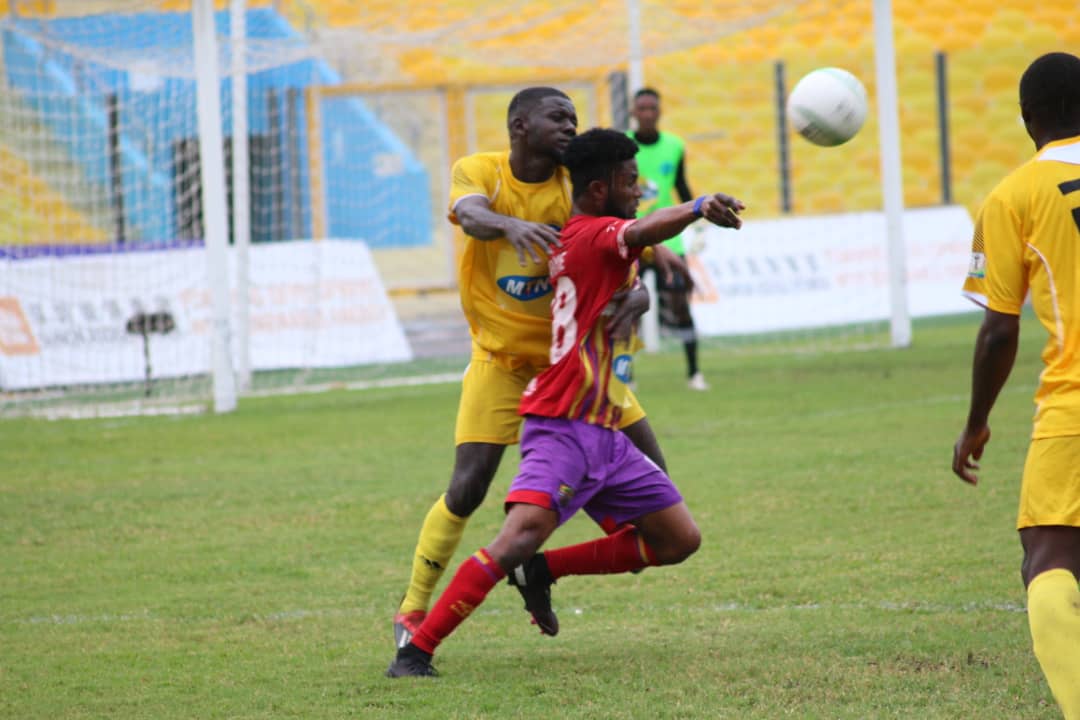 Hearts of Oak blew aside third-tier side Windy Professionals with a mammoth 4-1 win on Sunday, 20 June 2021 at the Accra Sports Stadium in their MTN FA Cup round of 32 tie.

The scoreline could have been an annihilation but for the profligacy of the Phobians especially in the first half with Daniel Barnieh being the worst culprit.

Windy Professionals safest pair of hands Abubakar Sowah stretched his leg to stop a Daniel Barnieh shot at goal from inside the box.

The Ghana U20 captain was put through on goal by a lofty pass from Kwadwo Obeng Jnr.

The visitors were not quiet all afternoon. They also showed up after 17 minutes and took the game to the Phobians.

In one instance, skipper Ola Selorm got past Caleb Amankwah with a neat step-over but he got tucked by the defender for a free-kick. That set-piece went straight into the wall.

Barnieh could not punish Windy Professionals again after 20 minutes when goalkeeper Sumaila missed a clearance after coming out of his area.

The ball dropped in the path of the Hearts of Oak forward whose shot at goal was blocked by a sliding Adams Mohammed.

Then Adams followed up with neat tackle inside the box to deny Fatawu Mohammed who was about to pull the trigger.

Before the half hour mark, Barnieh missed another glorious opportunity after his connection to a Frederick Ansah Botchway low cross from the left.

Ten minutes before the break, Barnieh again side netted at the near post with a powerful shot.

Windy Professionals were awarded a free-kick at the edge of the box after Hearts of Oak gloves man Richard Attah- as the last man-fouled an attacker with a stud-high tackle.

But the third-tier side skied that effort with a delivery from Yusif Alhassan.

Five minutes into the second half, Hearts shot into the lead through Barnieh whose shot from inside the box-aided by a deflection- flew past the Windy Professionals goalkeeper.

This was after Obeng Jnr had raided the left flank and whipped in a cross to the forward.

Four minutes later, Barnieh turned provided when he beat the offside trap to square the ball to an unmarked Emmanuel Nettey to direct into the net.

Against the run of play, Windy Professionals pulled one back with a scrappy goal after Frank Okine forced the ball over the line.

But there was a comedy of errors by two Hearts defenders- first Fatawu Mohammed and then Caleb Amankwah- who failed to clear their lines.

After 69 minutes, Benjamin Afutu headed in a Fatawu Mohammed cross from the right side to restore Hearts' two-goal cushion.

Substitute Manaf Umar sublimely connected home a low cross from Fatawu Mohammed to make it 4-1 for Hearts of Oak in the 77 minutes.