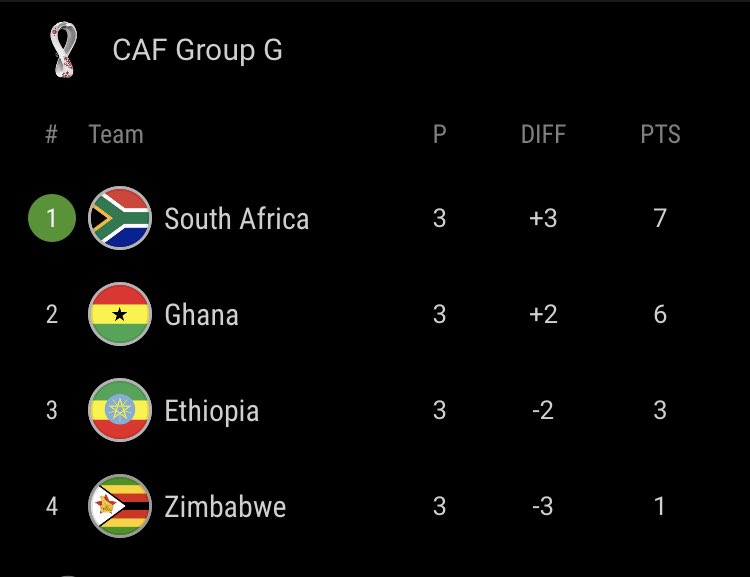 Ghana maintained their chase on group leaders South Africa as the Black Stars defeated Zimbabwe 3-1 0n Saturday to stay one point adrift of the group leaders.

Bafana Bafana were hoping that the Black Stars would drop points against the Warriors to enable them extend their lead over the West Africans who had other ideas for the match.

Goals by Mohammed Kudus, Thomas Partey and Andre Ayew scored to help the Black Stars to the victory in Cape Coast and took them to six points in Group G of the qualifiers.

The result leaves the Black Stars with six points, just one point behind South Africa who won their away game earlier on Saturday to maintain their place at the top of the group.

South Africa strengthened their standing in the top spot in Group G during their African World Cup qualifying with an impressive 3-1 win against Ethiopia.

Fasil Gebremikael was unable to stop the free-kick of Teboho Mookoena in the stoppage time of the first-half in order to allow Bafana Bafana to lead at the interval at Bahir Dar.

Getaneh Kebede equalised for the hosts at the start of the second half, however Mothobi Mvala added South Africa's advantage with 19 minutes left.

Substitute Evidence Makgopa secured the victory  for the visitors in the 91st minute.

Hugo Broos' side that were not able to make it to the Africa Cup of Nations, is the top team in the group, with seven points.