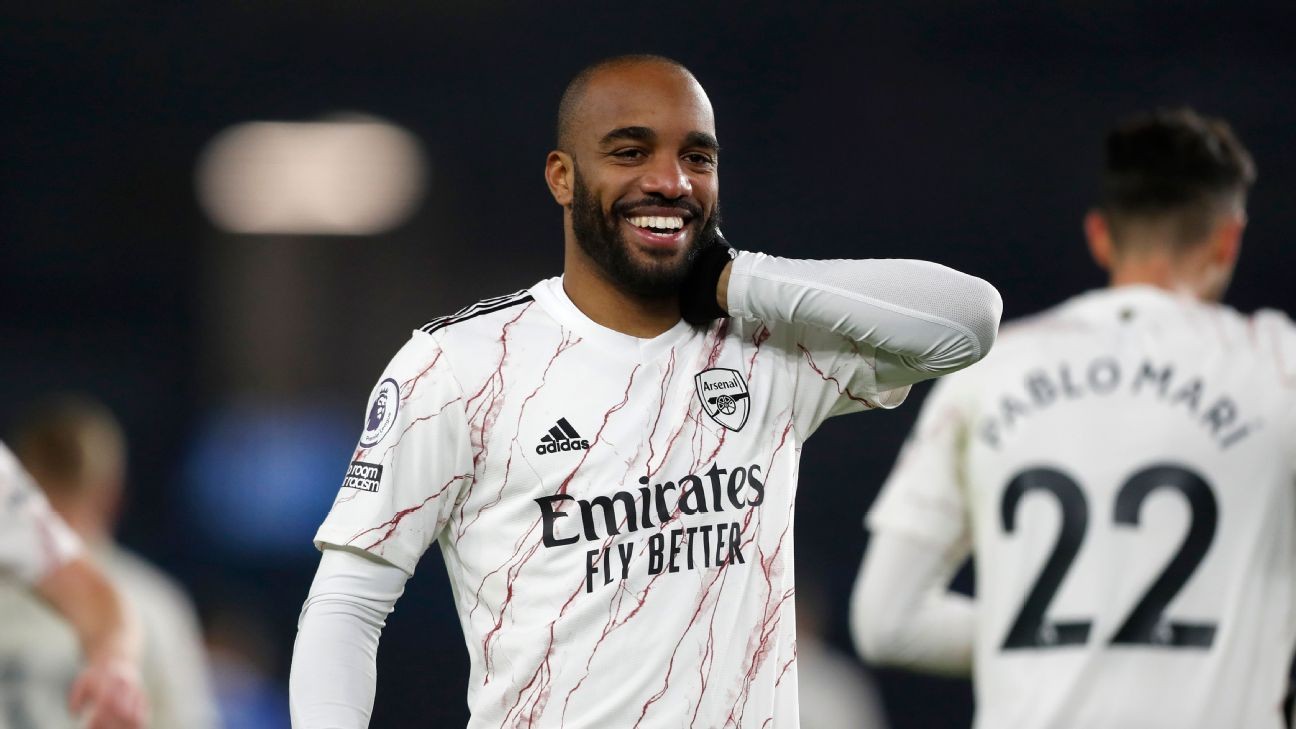 Arsenal boss Mikel Arteta has suggested Alexandre Lacazette could be offered a new deal to stay in north London, and defended the club's stance in allowing another senior player to run down his contract.

The 29-year-old's agreement expires at the end of the season and ESPN reported in September that there is no offer on the table for a player who joined in a then club-record £46.5 million deal from Lyon in July 2017.

That remains the case today and Lacazette, who made a lively goalscoring cameo in Monday's 2-2 draw against Crystal Palace but has started just once all season, will be free to talk to foreign clubs directly from the beginning of January when he enters the final six months of his deal.

Asked why Arsenal had not found a way to keep the striker, Arteta said on Thursday: "It depends on a lot of things, it is not just a matter of being willing. It is about being possible to fulfill that will and when, which is very important as well."

Asked whether that meant Lacazette would not be offered an extension, he replied: "No, I wouldn't say that. Anything is possible."

"It is the situation that we have and we have to accept it," he said. "I cannot ask anything from the player, the way that he is dealing with that situation, and it is not an individual situation.

"It is a situation that has a knock-on effect because of others we have to deal, as well in the past and still now, to see what the best option is going to be for everybody at the end of the season.

"I had no doubts about [how hard Lacazette works]. If I would, probably I would suggest to do something different with him in the summer, when a player could not find the motivation or if his interests are just with his financial future.

"It is not the case with Laca, and he has shown that since I have been here every single day. That's why he is a really important player for us.

"He's our player, and I treat him like any other player. Not because he has a year left, or doesn't have a year left. I'm not going to treat him differently, and that's what he deserves."

Arsenal have lost a raft of players in recent years in similar circumstances -- the most recent example being Aaron Ramsey's free transfer to Juventus in 2019 -- Arteta said: "It's a problem that occurs at every club because the contract has a length and players have certain ages and certain phases in their career, and it's something common that you have to be able to deal with.

Alexandre Lacazette will be free to talk to foreign clubs from January when he enters the final six months of his contract. Photo by Frank Augstein - Pool/Getty Images

Arteta was speaking on Thursday, 24 hours after Steve Bruce left Newcastle and revealed it may be his last job in management after finding the level of abuse tough to take, including accusations he was "useless, a fat waste of space, a stupid, tactically inept cabbage head or whatever."

The Spaniard believes Bruce's comments should trigger a wider debate in the game, adding: "I was really sad after reading that statement from Steve.

"First of all, because I know him personally, and secondly, because of what he transmitted in his words. You're talking about somebody who has been in the game for over 40 years as a player and as a manager.

"We can't take for granted and accept certain things because they are how they are. No, we are here as well to improve them and change them, like we do with any rules, with any fixture list and we have with anything that we want to improve for our sport, fans, stadium, facilities and broadcasts.

"We're going to spend more time and we [need to] have an open table to discuss how we're going to do that because I think we have to think about the fact that one of the most experienced managers in England's history is telling you that in a letter.

"You can't just ignore that, so for me, it's a very serious statement and it's something that has to change and has to start to change."