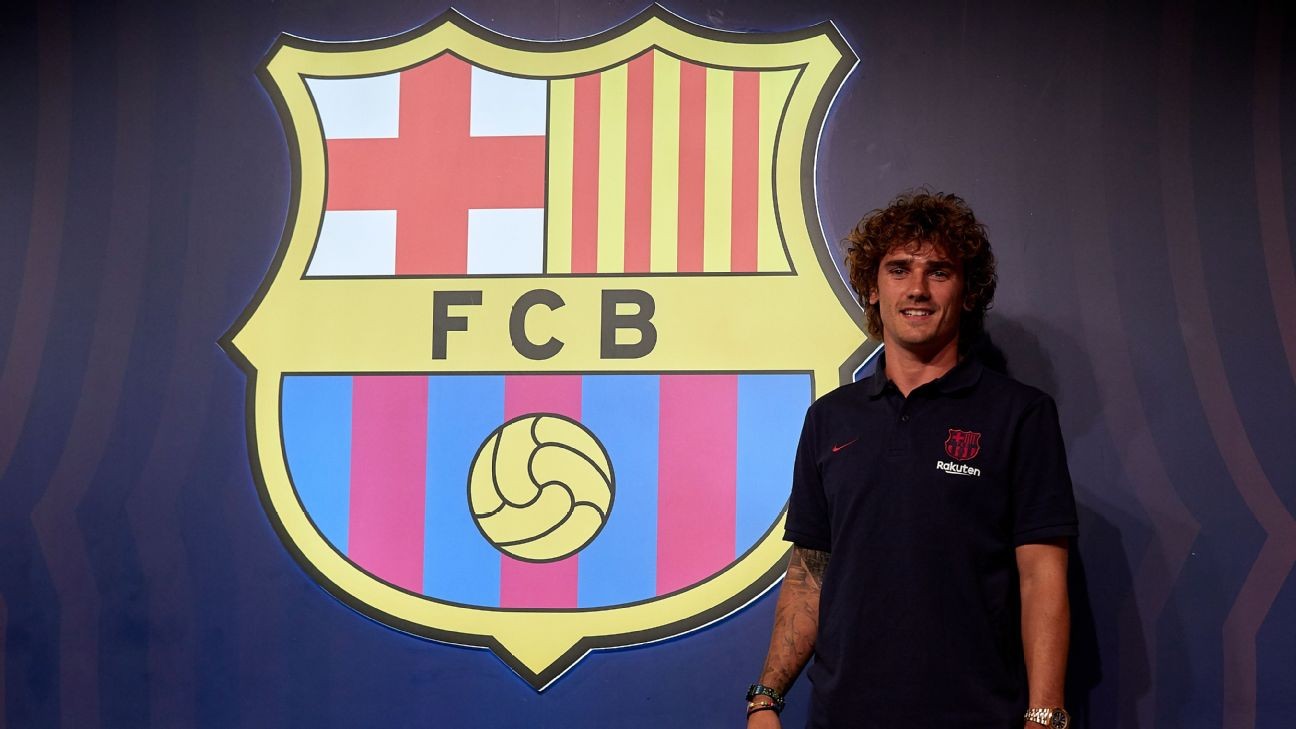 Antoine Griezmann discusses what it will be like to play with Lionel Messi and Luis Suarez and teases a brand new celebration for his first Barcelona goal.

Antoine Griezmann couldn't get out of the middle during a rondos drill on his first day with Barcelona, partly because he kept getting nutmegged.

Steve Nicol examines how Antoine Griezmann should go about making amends at Barcelona after snubbing their offer last summer.

Atletico Madrid have formally complained to La Liga over Barcelona's signing of Antoine Griezmann, as they claim they are still owed a further €80 million.

Barcelona provided the €120m which Griezmann's lawyer deposited at La Liga's offices in Madrid on July 12 to pay his buyout clause, and the France international was then presented as a new Blaugrana signing on Sunday at Camp Nou.

However Atletico said last Friday they did not accept Griezmann's clause had been legally triggered as an "insufficient amount" had been paid.

Freddy Adu: 'I'm not ready to give it up'

Sources at the Wanda Metropolitano have told ESPN FC Atletico still firmly believe they are owed a further €80m, as they claim Barca and Griezmann agreed their deal before the player's buyout clause dropped from €200m to €120m on July 1.

Atletico claim to have evidence negotiations between Griezmann and Barcelona date back to mid-February and the France international told the Rojiblancos of his intention to leave on May 14.

Barca president Josep Maria Bartomeu has rejected Atletico's version of events and claimed during Griezmann's presentation that the first contact was made after the forward had announced his desire to leave.

Bartomeu has also said that his first contact with Atletico about signing Griezmann came during a meeting between Atletico CEO Miguel Angel Gil Marin and his Barca counterpart Oscar Grau on July 4. Both sides agree that an offer by Grau at that meeting of a staggered payment of the €120m clause was rejected outright by Gil Marin.

Griezmann has been training this week with his new Barcelona teammates, and Blaugrana sources have told ESPN FC they are unconcerned by Atletico's stance. The 28-year-old is expected to make his debut in Tuesday's Rakuten Cup game against Chelsea in Japan.

Although some there are claims in the Spanish press that Atletico could take the case to FIFA, sources at the world governing body told ESPN FC they do not generally get involved in disputes between clubs from the same federation.

Official registrations of players with La Liga clubs are held by the Spanish Football Federation [RFEF]. Sources at the RFEF told ESPN FC that they were unable to confirm Griezmann's registration had been fully transferred from Atletico to Barca.

Should the Spanish authorities be unable to resolve the situation, the Court of Arbitration for Sport could be asked to adjudicate.