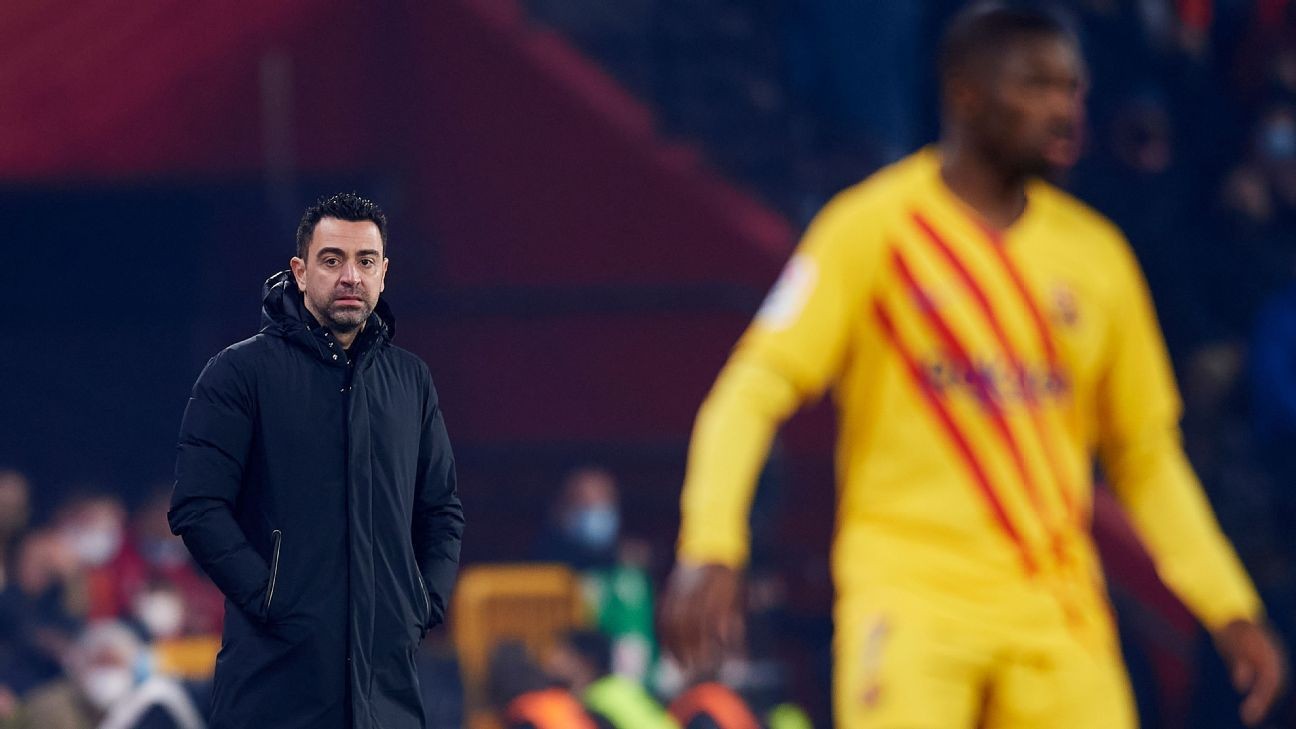 Barcelona coach Xavi Hernandez said Ousmane Dembele is free to leave the club this month if he doesn't renew his contract at Camp Nou.

Dembele, 24, is into the final six months of his deal with Barca and sources at the club have told ESPN they believe it would take a "miracle" for the France forward to commit to new terms now.

"The situation with Ousmane is difficult," Xavi said in a news conference on Wednesday. "The club have decided that if he doesn't renew, we will have to look for a solution.

"[Director of football] Mateu Alemany has been in talks with the player and his agent for five months. It's been too long now. Either he renews or we look for a solution."

Dembele's representative Moussa Sissoko said on Tuesday Barca had threatened to send Dembele to the stands for the final six months of his contract if he refused to sign an extension.

Xavi, who had to ask journalists to limit their questions on Dembele, said sending Demebele to the stands is not a solution.

"That is not something that I am contemplating," he added. "Either he renews or we look for an exit. It is one thing or the other."

Xavi repeated that Dembele has told him he wants to stay at Barcelona, but the club have been unable to strike an agreement with Sissoko, who said he has "certain demands" that Barca have been unwilling to compromise on.

Sources at Barca have told ESPN they hope for a resolution as soon as possible. On Thursday, Barca travel to Athletic Bilbao in the Copa del Rey and Dembele's participation is likely to depend on how the situation evolves over the next 24 hours.

"We will decide [on Thursday] if Dembele is involved," Xavi said. "It depends on many factors. The club will make a decision."

Xavi has issued an ultimatum to Ousmane Dembele over his Barcelona future. Jose Breton/Pics Action/NurPhoto via Getty Images

Dembele has drawn interest from a host of Premier League sides as well as Paris Saint-Germain, Juventus and Bayern Munich. However, sources added to ESPN that getting a fee for him this month would be difficult because it would eat into commission the player and his camp would get this summer when they can move for free.

Therefore, one source even suggested Barca may explore the possibility of rescinding Dembele's contract mutually.

Another player in line for a contract renewal at Barca is Ronald Araujo. The defender is still on the salary he agreed when he joined the club's B team in 2018 and, with his deal up in 2023, is due a pay rise.

"It's a priority to renew Araujo's deal," Xavi said. "You can see he is an important player for me, for the team.

"He is an extraordinary defender. It is very important we reach an agreement quickly."

Barca will be without the suspended Luuk de Jong for Wednesday's round-of-16 tie in Bilbao, while Memphis Depay is also a doubt. Martin Braithwaite could return from injury, though, while Pedri, Ferran Torres and Ansu Fati are all set for more minutes after returning to action against Real Madrid last week.