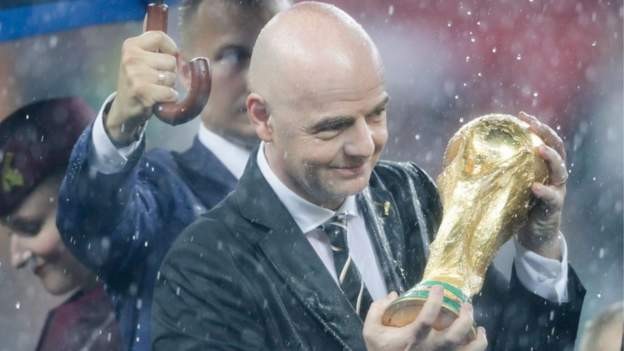 Fifa president Gianni Infantino has been criticised for comments referencing African migrants dying at sea when talking about the reforms to football's calendar.

Infantino says more regular World Cups can help provide hope for some nations but his comments have been criticised.

"Not by giving charity, but by allowing the rest of the world to participate. We need to give hope to Africans so they don't need to cross the Mediterranean in order to find, maybe, a better life, but more probably death in the sea."

More than 23,000 people are missing as a result of attempts to cross the Mediterranean according to data gathered by the Missing Migrants Project.external-link

Infantino later said his remarks had been "misinterpreted"external-link.

"I wish to clarify that, in my speech, my more general message was that everyone in a decision-making position has a responsibility to help improve the situation of people around the world," he said.

Kick It Out chief executive Tony Burnett reacted to Infantino's comments by stating: "Fifa is a multi-billion profit-making organisation. They already have the funds to invest in creating and inspiring opportunity for disadvantaged people around the world.

"It is therefore completely unacceptable to suggest that a biennial World Cup, predominantly set up to drive further profits for Fifa, could be a solution for migrants who risk their lives, sometimes fleeing war-torn countries, to seek a better life."

Uefa, Europe's major leagues and South American football's governing body Conmebol have all opposed plans for a biennial World Cup, while Caf, the African governing body, has given its backing.

Fifa delegates have been told switching the staging of football's biggest international tournament would generate £3.3bn in additional revenue over a four-year cycle.