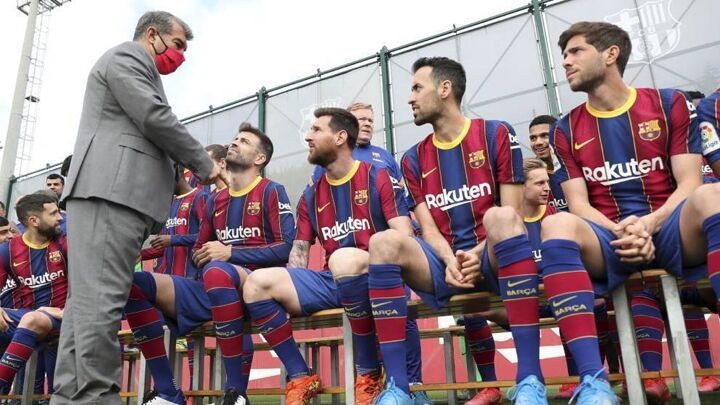 Barcelona have seen their hopes of winning the LaLiga Santander title fall by the wayside in recent weeks, following back-to-back draws against Atletico Madrid and Levante after a surprise home defeat to Granada, which has caused the Blaugrana's leaders to start thinking about next season.

The first thing that Barcelona president Joan Laporta must resolve is the future of head coach Ronald Koeman, who has come under increasing pressure after seeing the club's title push falter.

It has not been ruled out that Koeman will still be in charge next season, with the Dutchman still having one year to go on his contract, as he not only secured the Copa del Rey trophy but has brought through a series of young players that are now viewed as Barcelona's future.

Nevertheless, there are reports in the Catalan press that big changes are coming at the Camp Nou. Mundo Deportivo claim that there will be a 'revolution', with up to 14 players departing the club.

Who could leave Barcelona?

Barcelona's perilous financial position has been well documented, so if they want to strengthen any areas of the squad, they will first need to find suitors for some out-of-favour players.

The likes of Philippe Coutinho, Samuel Umtiti, Miralem Pjanic, Martin Braithwaite, Junior Firpo, Neto and Matheus Fernandes will all be put up for sale, but there could also be some big-name players that are made available.

In addition to disappointing on the pitch, Barcelona want to move some of them on - namely Coutinho, Umtiti and Pjanic - due to their high salaries, yet this is exactly why it will not be an easy task.

Due to the club's financial position, Barcelona are looking at players that are set to become free agents this summer. And unlike previous years, there are some attractive names that will be available.

Manchester City centre-back Eric Garcia has reportedly already agreed terms with the Blaugrana, while Liverpool's Georginio Wijnaldum, Lyon's Memphis Depay and City's Sergio Aguero are all on their shortlist.

Barcelona remain confident that Lionel Messi will end up putting pen to paper on a new contract, but Laporta and his board of directors are aware that they will need to sell a winning project to the Argentine in order for him to commit his future to the club.

The 33-year-old is happy with the progression that Barcelona's youngsters are making, yet he wants some elite players to come in that can hit the ground running and improve the quality of the squad.

There is expected to be a lot of long nights at the Camp Nou's offices this summer, as Barcelona look to get their revolution underway.