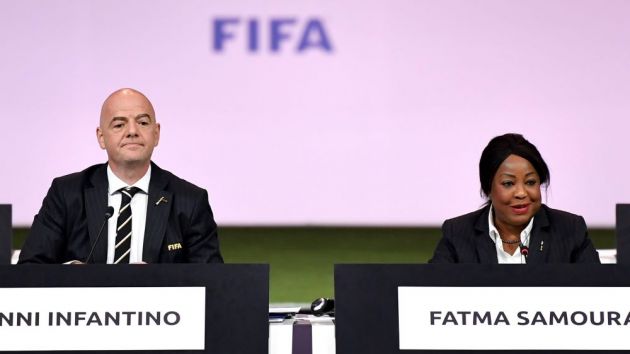 The Executive Committee of the Confederation of African Football (CAF) has resoundingly approved the decision to appoint FIFA general secretary Fatma Samoura as a High Commissioner for Africa to lead the reforms of the administration of the continent's governing body.

The overwhelming majority of the body on Wednesday approved the proposal from the CAF President Ahmad to have the Senegalese national take charge of the reforms in the wake of the major governance issues that have embroiled CAF, the sport’s largest regional confederation.

The former UN diplomat will not take charge of the day-to-day administration of CAF but will work to reform the structures of the governing body by working side by side with the General Secretary Mouad Hajji.

The CAF executive committee took a decision on Wednesday in Cairo to cede the reforms of the organisation to FIFA to ensure 'a strong, independent and transparent process 'with 99.9% of members approving the decision.

A leaked internal document relating to the matter said Samoura will lead a Fifa team that will conduct ‘a root-and-branch review of governance of the confederation, oversee operational management of the organisation, and recommend where needed a series of reform efforts.’

Adding: ‘This will be done in order to put CAF itself on a modern and sound footing, improve its image and reputation and thus ensure that CAF is better equipped to face future challenges and to grasp future opportunities.’

FIFA President Gianni Infantino who attended the meeting welcomed the opposition to the decision in some quarters and added that the result of Samoura's mission will decide whether it was worthwhile.

"I think in the UK there are different points of view. This is democracy. We must take all views on board and at the end of the day the result will decide whether it was right or wrong," Infantino said.

Breaking: @FIFAcom President Gianni Infantino says the arrival of @fatma_samoura to @CAF_Online, as “FIFA’s General Delegate for Africa” is confirmed, with “99.99% agreement” from the CAF exco. pic.twitter.com/LiLp11Lcu8

The move was put forward by CAF president Ahmad Ahmad, who is being investigated by Fifa’s ethics committee after allegations of corruption and sexual misconduct, insisting he is keen on an independent reform process to overhaul the system.

The 59-year-old was also questioned by French authorities earlier last month, but was released without charge and has dismissed all allegations against him as “false”.

CAF was also recently in the spotlight when this month’s African Champions League final, the continent’s flagship club soccer game, was overshadowed by a boycott by one of the teams following the failure of the video assistant referee (VAR) system.

A decision to replay the fixture has led to even more uproar.

This year’s edition of the national team tournament, which end on Friday, is being hosted by Egypt after Cameroon was stripped of staging the event.

Cameroon is now slated to welcome the 2021 edition of the competition, with the Ivory Coast being forced to make way and host the tournament in 2023 instead.