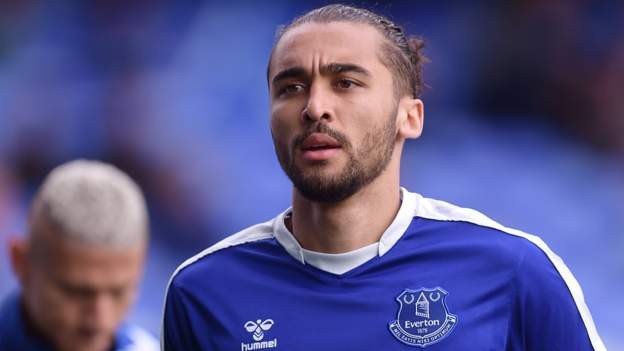 Calvert-Lewin has played 11 times for England

Everton striker Dominic Calvert-Lewin says "talking saved my life" in an emotional statement about his struggles with mental health this season.

He said he had to "dig deep" and "endured some of the most difficult times" of his life and career.

The England international was out with injuries for much of the campaign but his goal against Crystal Palace ensured Everton's Premier League survival.

"The love and support helped carry me through," Calvert-Lewin said.

"One thing I learned this season is that everyone in whatever walk of life is fighting battles you know nothing about, and there is no shame in finding someone to talk to and being open and honest with yourself about how you really feel.

"To all the young kings suppressing emotion I advise you to talk, to a friend, family member or someone that will listen, talking saved my life."

Calvert-Lewin missed four months between August and January with thigh and toe injuries, and after returning was hampered by further issues during the rest of the season.

"I have had to dig deep within myself at times this season and have endured some of the most difficult times of my career and my life to date," he said.

Speaking about the benefits of talking during his struggles, he added: "It will make you realise things are never as bad as they seem, and you'll discover that the paradox of true strength is being able to face your weaknesses."

Earlier this month, the Football Association, Premier League and English Football League reaffirmed their commitment to mental health by signing a new declarationexternal-link promising to help provide support to players and fans.

If you're affected by the issues in this article, help and support is available via the BBC Action Line.