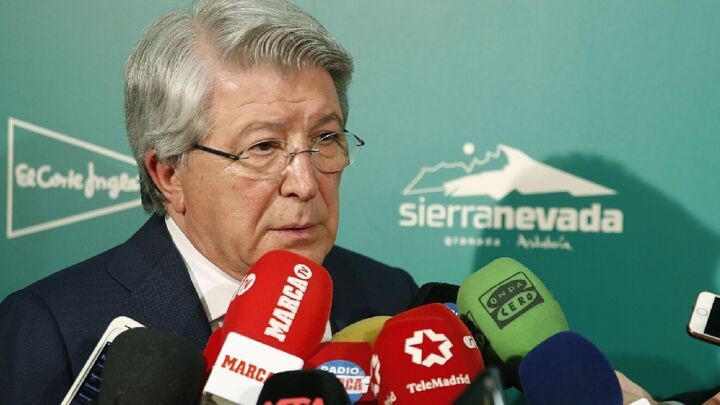 Enrique Cerezo has revealed that he is not aware of any talks between Atletico Madrid and Barcelona over a potential Antoine Griezmann return to the Estadio Wanda Metropolitano.

Barcelona's financial situation could force them to cash in on players in order to balance their books and a swap deal that would see Griezmann re-join Atletico and Saul Niguez move the other way has not been ruled out.

"In every negotiation there is a strategy," said Cerezo. "But in this case, I don't know if there are negotiations [with Barcelona].

"As far as I know there have been no negotiations. As far as [Atletico CEO] Miguel Angel [Gil] knows, I imagine that he neither [has negotiated]. He would have told me. Griezmann is a Barcelona [player]."

The Atletico president also clarified his remarks over Griezmann not being welcome by Atleti fans after stating that his comments were misunderstood.

"There are two important things," said Cerezo. "Firstly, that Griezmann is a Barcelona player at the moment.

"Secondly, it was a misinterpretation that I said that the arrival of Griezmann would not be good.

"I did not mean to say that, all the contrary. We don't know if Griezmann is going to continue at Barcelona and I can't tell you if the millions of Atletico Madrid fans are going to like him coming back or not.

"The expression was not that. I am not saying it was manipulated but I did not want to say that.

"I was in a rush to get to an event and must have misunderstood the question. I want all the good players to be at Atletico Madrid."

Cerezo went on to express his satisfaction on the way Atletico Madrid have acted for the time being in the summer transfer window.

"We have a magnificent team and I remind you that we are LaLiga Santander champions," added Cerezo.

"We have all the members of last season's [squad] and the signings have been very good for us with the arrivals of Marcos Paulo and [Rodrigo] De Paul. Then, those who join later will be welcome."