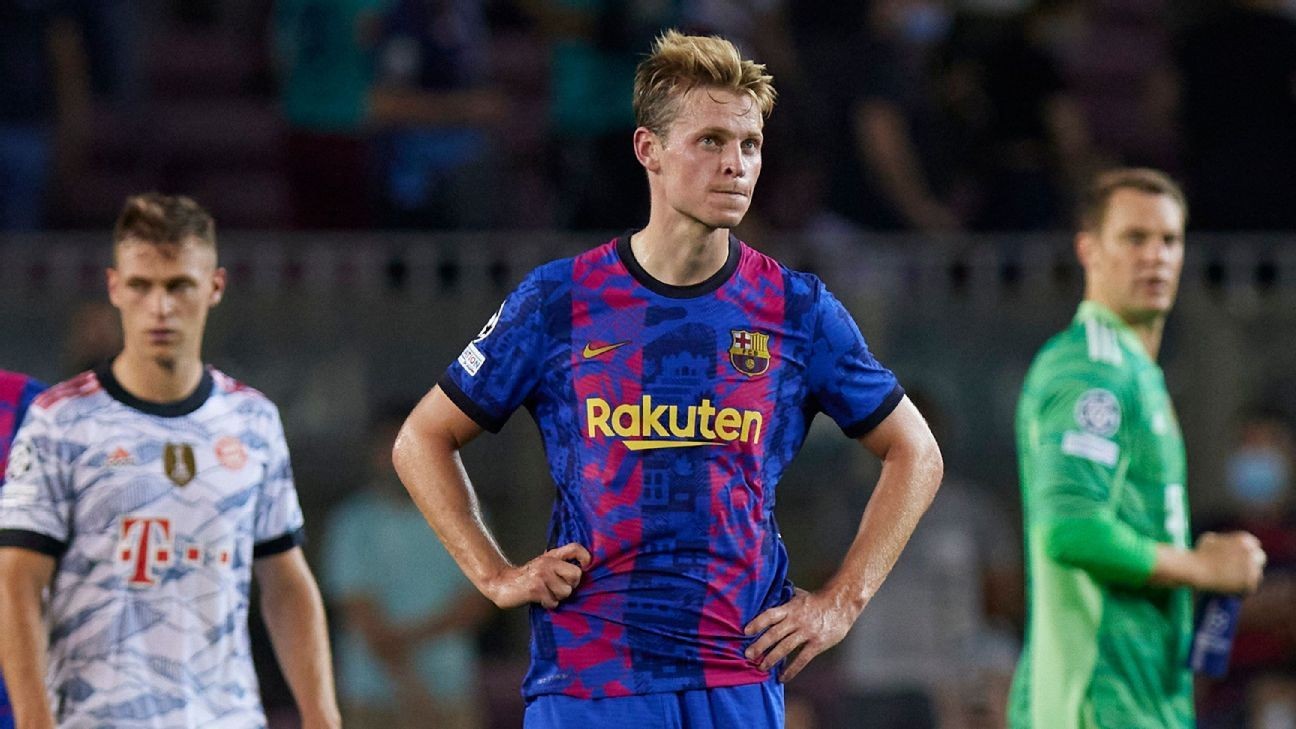 Barcelona might crash out of the Champions League this week, while Erling Haaland's Borussia Dortmund already have, and 40-year-old Zlatan Ibrahimovic could inspire a dramatic round-of-16 qualification for AC Milan. If you still needed convincing that the Champions League is just fine as it is, the next two days should offer unequivocal proof.

It is not just some of the big names who go into Matchday Six with their fate yet to be decided. In Group G, all four teams -- Lille, FC Salzburg, Sevilla and Wolfsburg -- can still make it through.

There are, of course, plenty of teams who have already booked their passage to the knockout phase. Bayern Munich, Manchester City, Liverpool and Manchester United are all secure as group winners, while Real Madrid, Inter Milan, Paris Saint-Germain, Chelsea and Juventus are also assured of a place in the round-of-16 draw on Dec. 13.

But with memories still fresh of the failed attempt by 12 clubs to form a breakaway European Super League (ESL) in April -- when some of the most powerful teams in the game unveiled proposals to create an exclusive new competition that would have killed the Champions League as we know it -- there is perhaps a sweet irony that Barcelona, one of biggest drivers of the ESL plan, are now desperately attempting to stay in a competition they were so keen to get out of.

- When is the UCL round-of-16 draw?
- What every team needs to get out of their UCL group

If Barca fail to beat Bayern Munich in the Allianz Arena on Wednesday, they will be relying on Group E bottom club Dynamo Kiev to deny Benfica victory in Lisbon in order for Xavi Hernandez's team to have a hope of making the round of 16.

So there you have it, mighty Barcelona, a club that has dominated the Champions League for the best part of 20 years, may end up needing a favour from one of those teams whose European future would have become so much bleaker had the ESL rebels been able to push through their hugely lucrative breakaway competition.

The last time Barcelona were absent from the knockout stages was the 2003-04 season, so their battle for Champions League survival is the headline-grabber of Matchday Six, but the competition has thrown up a number of other eye-catching storylines during the group stages that have teed up a fascinating final round of fixtures.

Already this season, we have seen the remarkable story of Sheriff Tiraspol, the champions of Moldova, who beat Real Madrid in the Santiago Bernabeu to go top of Group D after two wins in two games in their first-ever appearance in the group stage.

Swiss champions Young Boys opened Group F with a win at home to Manchester United, while Benfica's 3-0 win against Barcelona at Estadio da Luz in September rocked the Spanish giants, leaving them needing a win against in-form Bayern to guarantee themselves progress (though they also go through if Benfica fail to beat Dynamo.)

And in Group C, despite Dortmund appearing to be strong favourites to top the group, Erik ten Hag's impressive young Ajax team sealed top spot with five wins from five so far, while Sporting Lisbon, thanks to last month's 3-1 home win against Dortmund, claimed second place to drop Haaland and co. into the Europa League.

play1:11Do Borussia Dortmund let Bayern Munich get in their heads?

Janusz Michallik asks why Borussia Dortmund struggle to beat Bayern Munich, after the Bundesliga champions secured their seventh straight win against them.

Liverpool have also won five out of five in Group B, but Jurgen Klopp's team travel to Italy to face AC Milan on Tuesday with the Rossoneri back in with a chance of qualification, despite losing their first three games in the competition. A 1-1 draw against Porto at San Siro last month halted Milan's losing streak, but a 1-0 win against Atletico Madrid in Spain on Matchday Five gave Stefano Pioli's team a chance if they beat Liverpool and Porto fail to win against Atletico at Estadio do Dragao.

Even in Group H, where Chelsea and Juventus have dominated, the final round of games still matter, with both clubs -- locked on 12 points after five games -- determined to claim top spot and a place among the seeds in the draw.

But perhaps all of this final-game jeopardy is precisely why the ESL clubs wanted to break away from the competitive element of the Champions League. With so much money and prestige at stake if they fail to reach the knockout stage, the prospect of a closed shop competition, in which the huge finances are shared between the biggest clubs, has clear appeal to those owners and executives who don't want their slice of the pie threatened by an enterprising Ajax or a resurgent Benfica.

The club owners behind the ESL project had cited the need for football and the Champions League to change in order for the game to remain relevant among the sporting public. Yes, the Champions League can be predictable at times, but this season's group stage has shown why it is the best competition in the game. It doesn't need changing to make it relevant. We are seeing big clubs fall, star players drop into the Europa League and some famous old teams showing signs of a return to their former glories.

It's not what the owners and executives want, but just when the Champions League needed to remind us why it is the best of the best, it delivered a group stage that still has plenty of stories to tell this week.