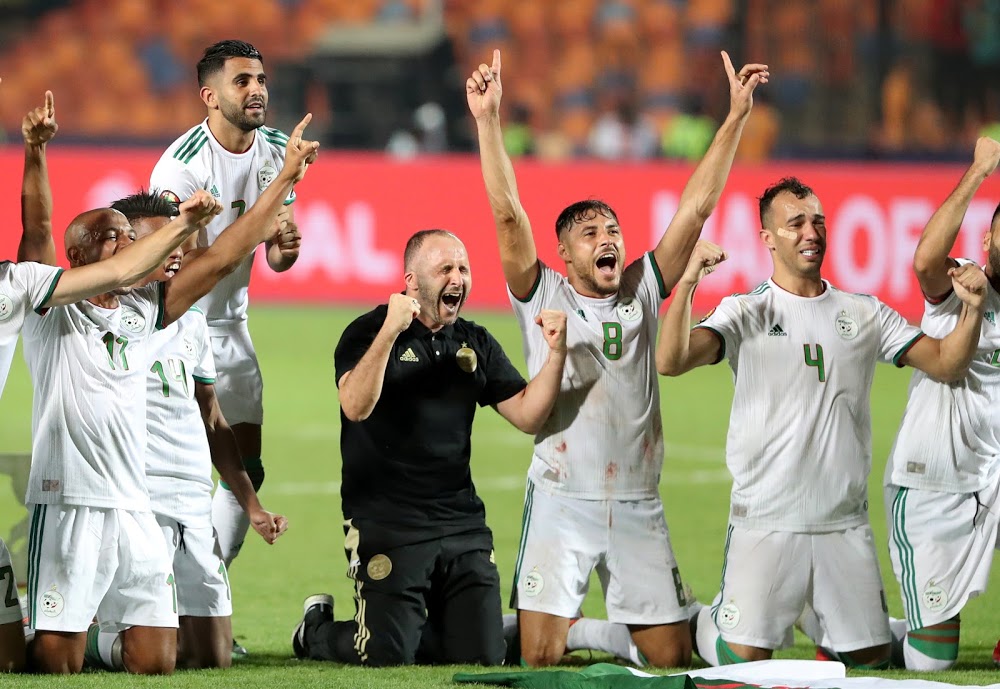 I asked myself; “How do you start this piece to do justice to the CHAMPIONS of AFRICA. Find something from their nickname fennecs (desert foxes), talk about the constitutional standstill in the country now?” Options options.

I’ll start by going back to the quarterfinal game with Ivory Coast. The game was one all at full time. So there was a coin toss for extra time. Feghouli who had the captain’s armband at the time (Mahrez had been subbed for Ounas) won the toss and yelled his coach’s name casually Djamel. He then asked Djamel which side to attack, he got his answer and we played on. No one won so it went to penalties. At the coin toss for penalties this time Rais Mbolhi was captain as Feghouli had been subbed. He won the toss and was asked whether he’d kick first. Again he shouted his coach’s name and asked, he got his answer. At that moment you could see how this team felt about their coach. They give him respect but he is like a big brother to some.

When Algeria won the shootout Djamel was on the bench in tears, next to him sat 20-year-old Youcef Atal who had to be subbed very early on in the game due to an arm injury. The two sat with arms around each other crying. Atal was so comfortable to sit and cry with Djamel like he was his father. This is what the fennecs brought to the tournament; a team who had passion and emotion and it oozed on the field of play not always positively.

Djamel Belmadi was born in France, not in Algeria, some of his players have a similar story. He came into the job about a year ago replacing an actual Algerian legend Raber Madjer. Djamel was not as big but he did everything right. He came to Egypt without Soudani and Bentaleb, no one missed them. There is a story of how he let the bus leave Mahrez behind once because he was late coming down to the bus. There are tales of how he has long hearty chats with his players talking about any and everything.

Algeria played the best football at this tournament, they seemed free and united. This was all Djamel’s doing. He kept Brahimi, Slimani, Ounas and Halliche on the bench for men who suited his style more and it paid off big time. He is an example of what the new era coach should bring to the national team job. Enough passion so it rubs off the players, be a friend, brother or father, and when it matters a disciplinarian. In the final, the Algerians did not play well. They got their early goal and decided to protect it. They did not look like the top-scoring team of the tournament; 13, four more than any other team. They fouled the Senegalese to break any rhythm and just kept at it, till the whistle was blown. But no one can say another team deserved to win this tournament more than Djamel’s Fennecs.

Guedioura like Djamel was born in France but has represented his parents’ country of birth with everything. It actually is the only way he knows. Give 100% and then some more. At a few months short of age 34, this had to be it, he knew it was his last chance and he played like that from day one. He quietly mopped up in front of the back four and initiated most of the neat triangle passes the Algerians did so well. He gave Bennacer and Feghouli freedom to go forward and have fun. He had their backs and was the best protection Benlamri and Mandi could have hoped for. He did not get in on the goals and was not the most swashbuckling in the team but I think he was their best player throughout.

The 24-team Afcon brought an extra 20 games with it. I thought it very enjoyable, there weren’t jaw dropping moments but a few will last in the memory. Mahrez winner against Nigeria, Madagascar’s fairytale run, Bounedjah’s tears, Benin’s doggedness, South Africa’s moment in the sun against Egypt. Over 100 goals went in and all we can do now is hope for more of the same in two years. Another edition where the quality goes up.