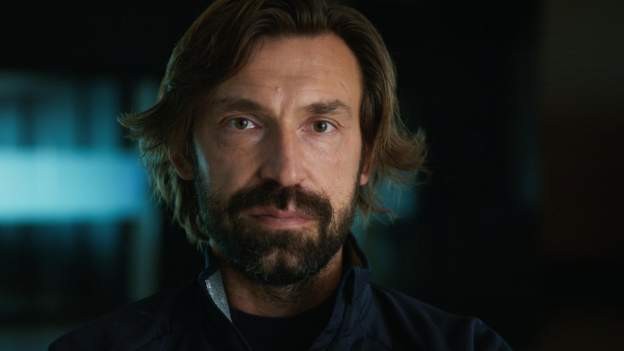 Andrea Pirlo is unflappable, Cristiano Ronaldo is a scary machine, and Gianluigi Buffon never has a day off.

They are just three of the things that become clear in Juventus: All or Nothing, which has just dropped on Amazon Prime.

Over eight episodes, the series charts Andrea Pirlo's first year at the helm. He takes over the most successful club in Italy - one that has won the Italian title for nine consecutive seasons and whose ambition is to win their first Champions League trophy since 1996. The old guard are getting older though and fresh recruits need to bed in.

In the end, it is a turbulent season, with the club failing to win Serie A , being knocked out of the Champions League in the last 16 and having to contend with the impact of coronavirus. We know now that Pirlo left at the end of the campaign.

We get to see how big characters like Pirlo, Buffon, Giorgio Chiellini and Leonardo Bonucci navigate the tricky waters and, of course, we get a glimpse of Ronaldo in training.

Here are eight takeaways from the series.

1. Ronaldo is his own nutritionist, hydration expert and physiotherapist

The documentary series gives us a chance to see the professionalism with which Ronaldo applies himself at work.

Of his strict diet, he says: "For me, it's not a sacrifice. To eat tuna fish or broccoli - I do that because I like it."

Ronaldo is across absolutely everything

His self-management even applies to allowing himself 20 minutes in the sun. "Any longer, you'll get wrinkles… but after 20 minutes, I feel better," he says in the first episode.

"In training, he coaches the others to do tricks and even in media duties never makes a mistake", according to PR manager Edoardo Bandini.

After Juventus are knocked out of the Champions League by Porto, it's telling that Ronaldo is the most inconsolable in the dressing room.

Ronaldo may not mind the strict diet but American midfielder Weston McKennie has to make a few adaptations to fit in when he arrives from German side Schalke.

In the second episode, a club doctor assesses him and finds he has 18% body fat.

McKennie is put on a meal plan.

"I miss the American burgers," McKennie says, adding: "Some chicken wings, some fried chicken, some donuts..."

Legendary goalkeeper Buffon is a constant source of positivity and inspiration in the Juventus camp.

Before the Coppa Italia final, in which Juve beat Atalanta to win the competition for a record 14th time, Buffon says: "I feel like I'm 20, with many more finals ahead of me."

Team-mate Federico Chiesa, whose dad Enrico played with Buffon at Parma, says: "I don't know if it's more strange for me to play with him, or vice versa."

4. Bonucci has making-up to do

Bonucci is one of Juventus' longest-serving players, having originally joined in 2010. So it shocked fans when, in 2017, he completed a move to arch rivals AC Milan. Bonucci only stayed one season at the San Siro before returning to Turin with his tail between his legs.

He talks about the whole affair in episode four in terms that make it sound slightly like marital infidelity.

"I knew I'd done something wrong, but that's the way I am. Juventus is my home," he says, adding: "The best thing for me in that moment was to leave but, as it often happens, when love is strong, there's an opening for reconciliation."

With Buffon and Wojciech Szczęsny ahead of him, keeper Carlo Pinsoglio doesn't get many chances to make the first team.

However, in episode five, we find out that he's a fan favourite and one of the biggest characters in the dressing room.

He also seems to have the closest bond to Ronaldo - going out on the latter's birthday to buy him a T-shirt with Pinsoglio's catchphrase - "give a little" - printed on the front.

In episode seven, Pirlo and Buffon talk about how the world has changed since they were young.

Pirlo bemoans this too.

"One thing that I hate is seeing people on their phone right before the match. From next year, you get your massage and you leave your phone in the locker," he says.

7. The chairman asked the team to back him on Super League plans

In episode seven, we also get an interesting insight into some of the conversations that went on around the time of the announcement of the ill-fated European Super League, of which Juventus were to be founder members.

Chairman Giovanni Agnelli tells the team: "The project has a codename 'BSW' - Best Show in the World. I'll work on it. If I need protection, I hope to have your back."

8. Pirlo is philosophical about the season

The series charts what was a turbulent season for Juventus, with a new breed of players coming through.

As well as missing out on the league title, they only just qualified for the Champions League. However, they did win two trophies - the Italian Super Cup and Coppa Italia.

Throughout, as one might imagine, Pirlo takes it in his stride and manages to look largely unruffled. Ultimately, he and the club parted ways over the summer.

"My final thought is that my work ended on a positive note," he says, at the end of the series. "I can walk away with dignity, with no regret."

'I was more of a continental player': Glenn Hoddle shares an insight into his life in footballAre con artists pathological liars? The man who manipulated his way into the lives of the rich and famous