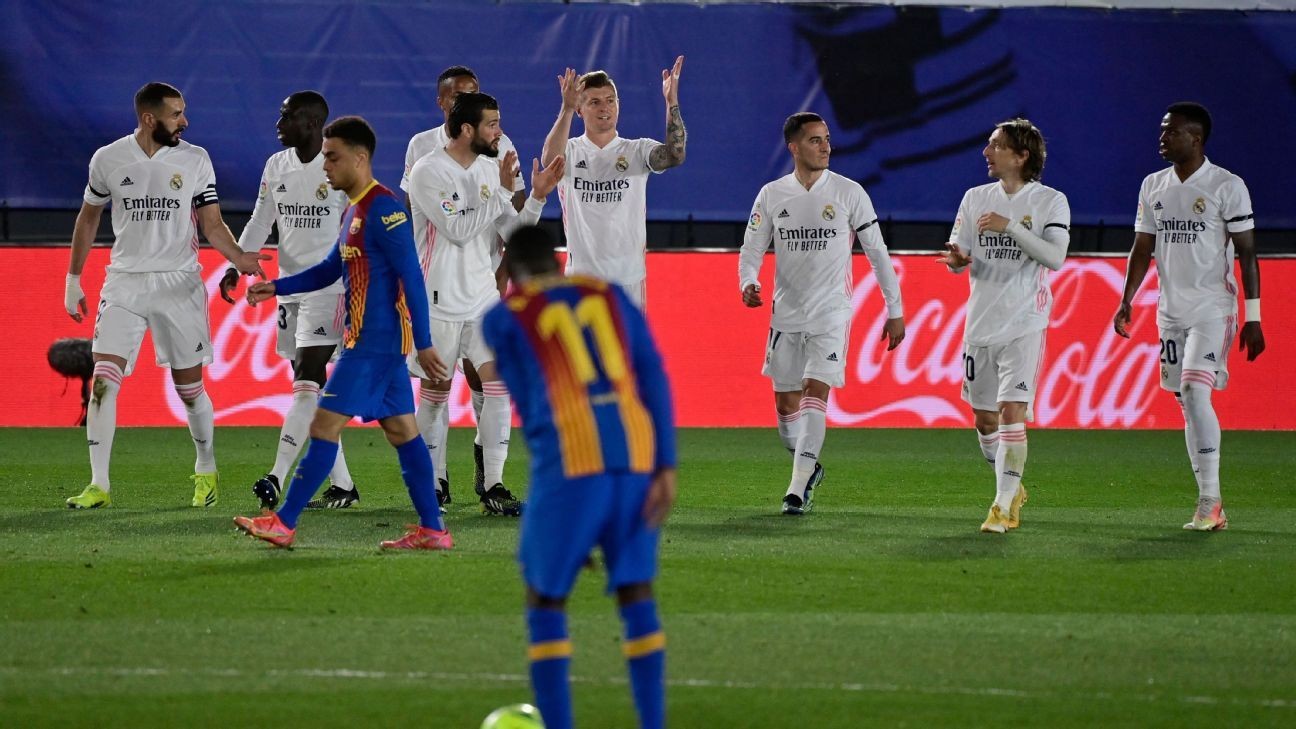 Sunday brings the 247th official edition of El Clasico, the eternal rivalry between LaLiga giants Barcelona and Real Madrid (10:15 a.m. ET; stream LIVE on ESPN+). Though it's still too early to look at single games within the context of the overall title race -- each side has 30 league games after this weekend -- it's never too early for these two to land a critical blow on each other and establish a little bit of joy amid a difficult start to the season.

Will Barcelona get a morale-boosting victory at home, or will Real Madrid add further woe to Ronald Koeman & Co., who are still processing the exit of Lionel Messi in the offseason? ESPN's Sam Marsden (Barcelona) and Alex Kirkland (Real Madrid) break down the game from a tactical perspective, looking at their form, the key players, the key battles around the pitch and the intangibles that could make the difference.

Marsden: Barcelona have won back-to-back games for the first time this season heading into the Clasico, but that has not served to lift the mood at Camp Nou. There was apathy around the stadium, which was only half-full, on Wednesday as Barca followed up a 3-1 win against Valencia by beating Dynamo Kiev 1-0 to register their first points in the Champions League this season. Some supporters even whistled the players as they closed out the game against Kiev.

The tension around the club, which peaked during a run of one win in six games before the international break, has eased a little following president Joan Laporta's decision to publicly back coach Ronald Koeman, but the Catalan club are always just one defeat away from another crisis.

Kirkland: The mood around Real Madrid was transformed by their 5-0 Champions League win at Shakhtar Donetsk on Tuesday. It was comprehensive, albeit against poor opposition, and a huge confidence boost ahead of Sunday's blockbuster clash. Prior to that, we'd seen some premature euphoria generated by big early wins --beating Celta Vigo 5-2 and Real Mallorca 6-1 -- which swiftly evaporated with three games in a row without a victory before the international break. The 0-0 draw with Villarreal was acceptable, the 2-1 home loss to Sheriff Tiraspol absolutely wasn't, and the way the team slumped to a flat 2-1 defeat at Barcelona's other team, Espanyol, was even more concerning.

It's been a very mixed bag, with reasons for optimism and others for pessimism, depending on your preference.

TEAM NEWS: WHO'S FIT, WHO'S HURT

Marsden: Ansu Fati's return to fitness in recent weeks has taken the burden off Memphis Depay in attack. After 10 months out with a knee injury, he scored on his return off the bench against Levante in September and then again in last week's Valencia win, in what was his first start since last November. He returned to the bench against Kiev, but will be ready for Madrid.

Elsewhere, Sergio Aguero has come on as a substitute in the last two games and the striker could have an impact off the bench this weekend. However, it looks like the game will come too soon for Pedri and Ronald Araujo. Pedri has a thigh problem, while Araujo injured his hamstring playing for Uruguay last week. Jordi Alba is also a minor doubt after hurting his foot on Wednesday. Martin Braithwaite and Ousmane Dembele are still out, too.

Kirkland: This week's big return vs. Shakhtar was that of Ferland Mendy, who made his first appearance since May. It means Carlo Ancelotti can finally field an experienced, dedicated left-back after alternating between Nacho, David Alaba and youngster Miguel Gutierrez so far this season. Toni Kroos is back from a groin injury, with three games under his belt now. He's a player you don't always appreciate when he's in the team, but miss desperately when he's out.

The most significant doubt is right-back Dani Carvajal, whose recent calf injury is the latest in a long list for him, and is only just back in full training. Isco and Luka Jovic are out with short-term issues, while Gareth Bale and Dani Ceballos won't be back until next month. Eden Hazard is an injury doubt too, but isn't he always?

HOW EACH TEAM SHOULD LINE UP

Marsden: Unless he decides to switch back to the 3-5-2 formation, which has brought plenty of criticism at times for how much it deviates from the club's philosophy, Koeman is likely to pick the same side that beat Valencia 3-1 last Sunday. It would mean Sergi Roberto at right-back, with Sergino Dest continuing in a wide right role alongside Ansu and Memphis in attack.

The rest of the team fills itself out: Marc-Andre ter Stegen, Gerard Pique, Eric Garcia, Alba, Sergio Busquets, Frenkie de Jong and Gavi. Barca will look to have the ball and play in Madrid's half, but they'll have to protect themselves at the back against the pace of Vinicius on the break.

FC Barcelona vs. Real Madrid -- arguably the greatest rivalry in international soccer -- is back on Sunday, Oct. 24, at 10:15 a.m. ET. Sign up now to stream ElClásico on ESPN+

Kirkland: Ancelotti was categorical this week. "This team has to play [in a] 4-3-3," he said on Monday. "There's no other way." He went on to explain that 4-4-2 experiments this season hadn't convinced him: the players weren't comfortable, and there was no time to change that at this stage of the season.

Most of the XI picks itself: Thibaut Courtois in goal; Alaba and Eder Militao at centre-back, with Mendy and Nacho at full-back; the classic midfield of Casemiro, Kroos and Luka Modric; and the team's two best players this year, Vinicius Junior and Karim Benzema. The only doubt is whether Ancelotti opts for Fede Valverde on the right or Rodrygo Goes. Valverde, the more conservative option, was on the bench against Shakhtar, while Rodrygo impressed and scored.

Ancelotti suggested that he'd played so well that he'd be difficult to leave out. If the coach feels Barca are there to be beaten, he'll go for the Brazilian.

Marsden: Barca's big threat will come from the left-hand side. Alba was in good form against Kiev in midweek, setting up the goal, while Ansu, positioned ahead of him, has hit the ground running after nearly a year on the sidelines. Memphis, meanwhile, also tends to drift to the left, where he links well with Ansu.

With Dani Carvajal injured, Barca may see a weakness on Madrid's right, especially if Ancelotti goes for Rodrygo over Valverde, which would leave Nacho more exposed.

Real Madrid triumphed in both meetings with Barcelona last season, winning 3-1 at the Camp Nou in October, 2020 and then 2-1 in Madrid in April, 2021. What will Sunday bring? JAVIER SORIANO/AFP via Getty Images

Kirkland: It's all about the midfield. If Casemiro, Kroos and Modric get the best of Busquets, de Jong and Gavi, Madrid get the win. They'll need to protect a potentially fragile Madrid backline -- Alaba is outstanding, but Militao always looks capable of a blooper under pressure -- while giving Benzema and Vinicius a platform to perform at the other end. Madrid's midfield are vastly experienced, but haven't yet tipped over into "ageing," let alone "past it" territory, as Modric continues to defy the passage of time at 36.

Casemiro relishes games like these -- expect him to get stuck into Gavi, looking to provoke a reaction from the hot-headed youngster -- and Kroos is overdue a big performance.

Marsden: All eyes have been on Ansu in recent weeks, but Barca need a big game performance from summer signing Memphis. The Dutch forward started the season well after arriving on a free transfer from Lyon, but his performances have dipped since. He's scored four goals in 11 appearances, but hasn't netted from open play since Aug. 29, with his last two goals both coming from the penalty spot. However, while his numbers aren't befitting of a Barca forward, his displays haven't been all bad. He's a player who doesn't stop trying and is capable of the sublime on his day.

Dan Thomas is joined by Craig Burley, Shaka Hislop and others to bring you the latest highlights and debate the biggest storylines. Stream on ESPN+ (U.S. only).

Barca will look to get the ball to him in the final third and, from there, he will run at Madrid's backline. The early signs suggest that he and Ansu have a good understanding as well.

Kirkland: Benzema. It's true that the Ballon d'Or PR campaign has been overwhelming lately, but it's not just talk. His case is solid: Benzema is now the best player in LaLiga by miles, and one of the best in the world. He's scored as many league goals this season as Barca's entire forward line (Memphis, Ansu, De Jong, Aguero and Braithwaite combined), and he's the top assist provider in LaLiga, too. He's a leader, and the hub around which Madrid's attack revolves. He's capable of scoring all kinds of goals, with more variety to his game than ever before.

Peaking at 33, a player who once seemed to shy away from the spotlight now appears to be relishing it.

WILD CARD/X-FACTORplay1:20Benzema: El Clasico the best match in the world even without Messi

Karim Benzema explains why he believes El Clasico is the best match in club football.

Marsden: If Koeman sticks with a similar side to the one selected in the last two games, the element of surprise could be supplied by Dest. He has pace, tricks and confidence and will, at the very least, give Mendy something to think about. Right-back may be his long-term position but he's providing balance on the wing at the moment for Barca, who just need him to find an end product. He missed two chances against Kiev but, as fans of the United States men's national team know, he's more than capable of delivering when it matters.

Kirkland: Vinicius. He's no secret weapon -- his transformation this season has gotten everyone talking -- but he's absolutely a wild card. You don't know what he'll do next; he doesn't know what he'll do next. But the aspect of his game that made him a figure of fun in the past, the extraordinarily inconsistent finishing, has been vastly improved.

Tuesday's brace at Shakhtar was a case in point. His second goal put him in exactly the kind of situation where he has previously frustrated, but this time, a slaloming run through the defence was followed by an unerring finish, rather than a mishit shot. The next step will be to consistently deliver over the course of a season.

Marsden: Neither team are as good as they were five years ago, but Madrid have the edge going into this Clasico. Not only have Barca struggled this season, but they haven't beaten Madrid or Atletico Madrid in LaLiga since Koeman took charge. Barca 1-2 Madrid.

Kirkland: El Clasico is the big game that rarely disappoints, with just two 0-0 draws this century. There should be goals in this one at both ends. I'll go for an entertaining 2-2.