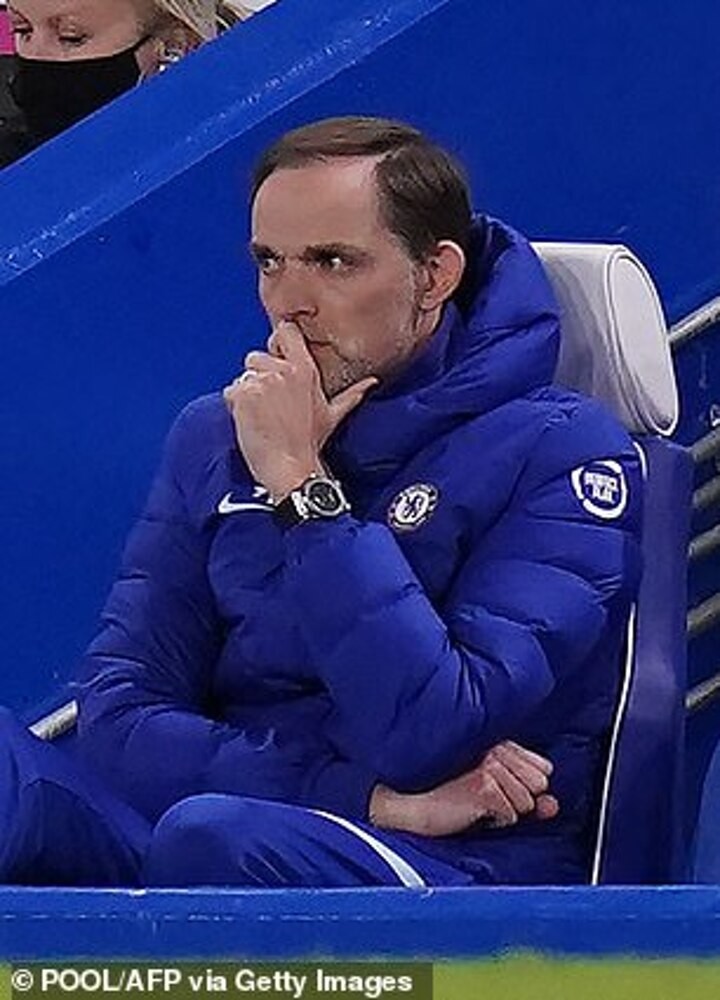 Chelsea and Leicester face off twice in four days and the stakes could not be higher in either fixture.

The duo will contest the 140th FA Cup final at Wembley on Saturday, before continuing their battle to qualify for next season's Champions League at Stamford Bridge on Tuesday.

There are certain to be plenty of thrills and spills as both Thomas Tuchel and Brendan Rodgers make the most of their squads, with Chelsea hoping to win the FA Cup for a ninth time, while Leicester would record a maiden crown with victory.

Here, Sportsmail picks a combined XI of players from both Chelsea and Leicester. We've only included players who are fit to play on Saturday, with the likes of Harvey Barnes therefore out of the equation.

While Chelsea seem set to slide away from playing their first-choice goalkeeper at Wembley, Leicester will go with one of the real leaders in their side in Kasper Schmeichel.

The 34-year-old Dane was a key element of the side that historically won the Premier League title in 2016, and is known around the league as one of the more vociferous voices around to accompany his excellent shot-stopping skills.

He has kept just 11 clean sheets in 36 Premier League matches, below Edouard Mendy's 16 in 29 top-flight appearances. However, Tuchel confirmed the Senegalese would be left out in favour of Kepa Arrizabalaga, who has endured a torrid time in west London in 2018.

'He [Kepa] starts the FA Cup final, and we thought it was a good idea to give him the game before,' Tuchel said. 'We trust him and he deserves it. That is the basis of why we put him in the line-up.

'He deserves it. He is so close and good in training. We wanted to give him some minutes and take both games together. It was an unlucky night for him as well.'

A contender for PFA Team of the Season less than 12 months after joining from French outfit Saint-Etienne for £36million, Fofana has starred alongside Jonny Evans and Caglar Soyuncu in a defence that has been hit by many injuries this term.

Fitness issues have not bedevilled Fofana though, missing just six top-flight games this term, and he has even played during Ramadan having not eaten during daytime.

Recently linked with Manchester United as a reward for his brilliant first season in England, he fully deserves a place in our starting XI.

The man reborn at Chelsea following Tuchel's arrival, Rudiger has emerged as a real leader in the backline.

His absence due to rotation against Arsenal was noticeable as the Blues suffered a setback in their hopes of sealing Champions League qualification.

The Germany centre-back has rediscovered his sharpness, energy and hunger for a physical battle following Frank Lampard's departure, showing all those qualities against Manchester City in the FA Cup semi-final.

He will need to be at his very best again and win all of his duels if his and the Blues' next Wembley appearance is to bring silverware 10 months on from their disappointment in the same competition against Arsenal.

While Rudiger appears to be the all-action defender whizzing around the place and dominating opposition forwards, it appears Silva brings the Ying to the German's Yang.

Ashley Cole was the latest to praise the 36-year-old Brazilian for bringing calmness and assurance to a defence that conceded 79 goals last season after joining on a free transfer from PSG.

Cole also claimed his cool persona has rubbed off on those around him, and while that was not necessarily in evidence against Arsenal, Silva himself put in another measured display.

Tuchel's Mr Dependable, the German will be counting on his reliable defender to keep Leicester's attacking threats at bay, and given the way he has taken to the Premier League on and off the field he is a certain in our combined XI over another experienced defender in Jonny Evans.

Another star who had been limited to a part-time role under Lampard but appears rejuvenated under Tuchel, Azpilcueta has demonstrated the reliability that has made him such a brilliant player for the Blues over the years.

A formation change under Tuchel to include wing backs has undoubtedly aided his resurgence in the Chelsea first team, but it is his persona which his boss believes demonstrates 'everything typical for Chelsea'.

Leicester's Timothy Castagne has certainly impressed in his first season in the Premier League, and his versatility in being able to slot into a back three is a quality no side would sniff at.

But having won two Premier Leagues, and as many FA Cups and Europa Leagues, Azpilicueta edges the Belgian out in our XI just for the experience he would provide in a match of such intensity.

Both Leicester and Chelsea know and appreciate the value that the France World Cup winner brings to a football team.

Left out in the defeat by Arsenal due to what Tuchel described as 'pain management' in his Achilles, his tireless work in midfield never goes amiss.

He has dominated big games so far including the Man City semi-final where he drove through their midfield at will, and repeated similar surges forward in both legs against Real Madrid in the Champions League semi-final.

In any other midfield, Wilfried Ndidi would be a guaranteed starter and offers presence and drive to Rodgers' midfield on a weekly basis. But here the Nigerian is trumped by his French counterpart, who is wowing with his performances once more.

Foxes boss Rodgers admitted he will consider 'more than talent' when he gets round to naming his XI for Saturday's final.

But regardless of the fact he is still working his way back from a hip injury and after breaching Covid protocols to then be dropped from the side, Maddison remains one of Leicester's most devastating players.

Coming off the bench in the win against Manchester United in midweek, he enjoyed some joy in the final 25 minutes of the match which handed Man City the title.

But while his appearance off the bench demonstrates the Foxes are less reliant on the 24-year-old now, it is these moments which the best seize, and after a storming start to the season, he will hope to serve a reminder - to Gareth Southgate in particular -  just what he is all about.

Team-mate Youri Tielemans has also impressed this term, but Maddison's natural ability to conjure magic from nowhere sees him slot in alongside Kante here.

While Maddison's spot in the England Euros squad is unclear, there is far more clarity around the excellent Mount, who has excelled regardless of the manager in charge at Chelsea this term.

Doubts over his ability have long diminished and Tuchel insists the 22-year-old is now one of the 'outstanding examples' of young England stars due to his ability to 'decide the biggest games'.

The midfielder scored the goal at Stamford Bridge that secured the Blues' place in the Champions League final at the expense of Real Madrid, having been an influential presence in the first leg.

Mount caused Fernandinho all sorts of problems in the FA Cup semi-final and it was his pass which set Timo Werner free to slide the ball across the penalty area for Hakim Ziyech to score.

Given the moments he has provided Chelsea in what could be a historic season for him and the club, it is no surprise to see his name included in this combined XI.

The left-back looks a certain starter for both of Chelsea's finals this month, but that did not appear the case when Tuchel first arrived a few months after his £50m move.

Marcos Alonso was given the chance to resurrect his Blues career, but the German boss soon realised that despite never having played the position before, the England star could do the job at left wing-back.

He played in both legs of the Champions League quarter-final against Porto and the semi-final with Real Madrid, against Manchester City in the FA Cup semi-final, and in big league games with Manchester United, Liverpool and Arsenal.

There were grumblings that Tuchel was not too impressed with his performance in midweek, but with his excellent ability to get up and down the pitch, and the best naturally left-footed available, Chilwell should get the nod against his former club, and he starts in our XI ahead of the inexperienced Luke Thomas.

By his standards he has been way off the mark in 2021, scoring just two Premier League goals this calendar year and perhaps showing the tiredness that has struck all players at some point this term.

He has been kept quiet by opposition defences in recent weeks and has struggled to get involved in goals being scored, failing to net and providing just one assist in his last four games.

However, he has scored goals for Leicester when they have needed them most over the past five years and will make history regardless on Saturday by becoming the first player to have played in each of the 13 rounds of the competition.

And perhaps the occasion and the additional room on offer at Wembley could see him cause Chelsea's defence a few problems and fire Leicester to glory, not mentioning the boundless energy he will still provide despite being 34 years of age.

There is very little lately to split Timo Werner and Vardy, but the latter gets the nod in our combined XI, just.

On current form, how can you not pick the Nigerian international? Questioned for his ability by many, he has responded in the best way possible for a striker so far this calendar year.

He has netted on 15 occasions in 2021, including a double against Manchester United in the quarter-final of the FA Cup and taking advantage of a Southampton error to capitalise in the semi-final.

Tipped by a few including Jamie Carragher to now emerge as Vardy's long-term successor having found the net in the last three rounds, Iheanacho will once more look to lay down the gauntlet on one of the biggest domestic stages of all.