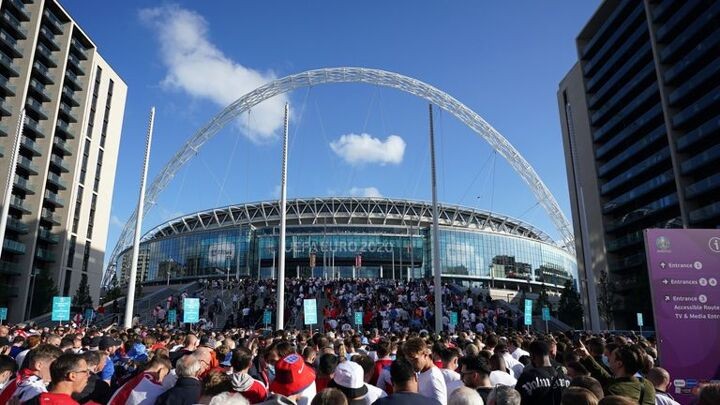 Over 70 per cent of fans across England think professional football in the country has a serious problem with racism - an increase of 17 per cent since the opening stages of Euro 2020 in June.

A YouGov survey shared with Sky Sports News has revealed one in three people who previously did not think racism was a serious problem now do so following the final of the tournament.

After missing penalties in England's shootout loss to Italy, Marcus Rashford, Jadon Sancho and Bukayo Saka were all met with a torrent of racist abuse online, with murals to the players later defaced with graffiti.

Fans and players alike have been quick to condemn the abuse and rally around those targeted.

Fans in England were asked at the end of March whether they thought racism existed in professional football in the country, before being asked the question again in June and once more following the Euro 2020 final.

Following the racist abuse of Rashford, Sancho and Saka, seven in 10 football fans in England (71 per cent) now think that professional English football has a serious problem with racism, a rise of 17 per cent since the start of the tournament last month.

This represents a significant conversion among those who had previously acknowledged that racism existed in English football, but did not consider it to be serious. 36 per cent previously held this view, but this has now shrunk to 24 per cent.

Only 2 per cent of fans think racism does not exist at all in English football.

Among the general public, opinion shows a similar change, with two-thirds of English adults (66 per cent) thinking professional football has a serious racism problem compared to 46 per cent who held this opinion in June.

The abuse has also brought renewed focus on the England team taking a knee before each of their matches in protest against racial inequality.

A significant proportion (32 per cent) remain opposed to the team taking a knee, although this opposition has decreased by 10 per cent compared to June.

Is the FA doing enough?

In a separate YouGov survey last month, taken four weeks before Rashford, Sancho and Saka were targeted with racist abuse online, only 36 per cent of English supporters said the Football Association (FA) is doing enough to tackle racism in professional football, with 47 per cent saying it was not doing enough.

Responding to the survey, the FA told Sky Sports News one of its key objectives over the next three years is to "deliver a game free from discriminatory behaviour".

It says its three-year equality, diversity and inclusion plan, In Pursuit of Progress, is focusing on initiatives to promote equality and increase the diversity of those playing, officiating, coaching, leading and governing English football.

The FA also points out it remains proactive in tackling online discriminatory abuse, having led English football's social media boycott from April 30 to May 3 this year.

The governing body wants to continue the lobbying of government on the Online Safety Bill, and is urging social media companies to act faster to tackle hate on their platforms.

Sky Sports is committed to making skysports.com and our channels on social media platforms a place for comment and debate that is free of abuse, hate and profanity.

If you see a reply to Sky Sports posts and/or content with an expression of hate on the basis of race, sex, colour, gender, nationality, ethnicity, disability, religion, sexuality, age or class, please copy the URL to the hateful post and screengrab it and email us here.

Kick It Out reporting racism

Kick It Out is football's equality and inclusion organisation - working throughout the football, educational and community sectors to challenge discrimination, encourage inclusive practices and campaign for positive change.