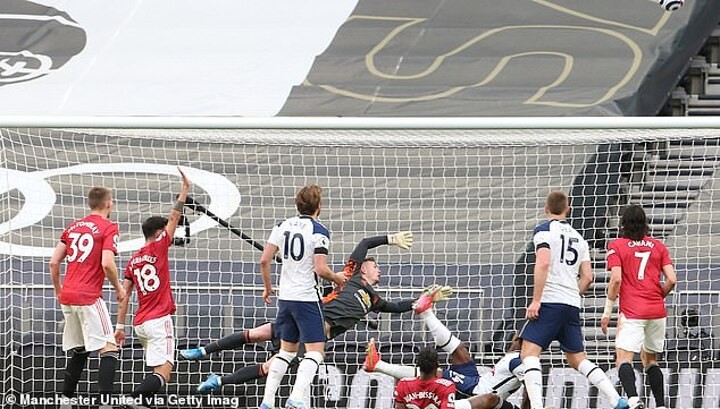 Gary Neville has praised Dean Henderson's 'courage' after Manchester United came from behind to beat Tottenham 3-1.

The 24-year-old England keeper was in fine form as the Red Devils claimed a vital victory in north London, to leave them 11 points behind league leaders Manchester City with a game in hand.

United legend and Sky Sports pundit Neville, revealed his admiration for Henderson's progress since he took over from David de Gea as the club's No1.

'I've been impressed with Henderson. It's a big ask. I think it's the job most scrutinised in football, Manchester United's number 1.  Neville told Sky Sports.

'You make a mistake it's a position you get absolutely punished in and I'm always wary that when United have had great goalkeepers they've done well.

'He's a young goalkeeper but in the first five or 10 games he's played he's been really confident, really sure. You have to have courage to play that position full stop. '

Henderson has made eight appearances in the Premier League for United this season, keeping four clean sheets in the process.

He took over from de Gea as the club's first choice keeper, after the Spaniard returned to his home country for the birth of his child in March.

Tottenham took the lead through Son Heung-min's first half strike, but United fought back after the break and goals from Fred, Edinson Cavani and Mason Greenwood sealed a priceless win.

The Red Devils are now unbeaten in their last 23 Premier League away games and host Granada in the second leg of their Europa League quarter final on Thursday, they're currently 2-0 up on aggregate.