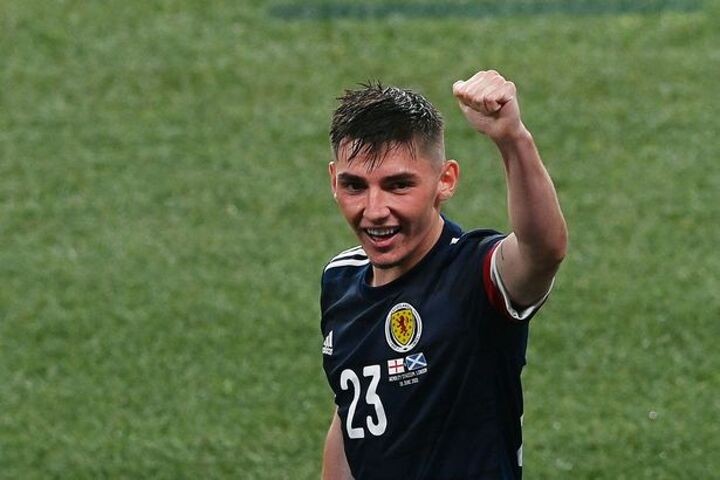 It's been a bit of a rollercoaster year for Billy Gilmour.

A serious knee injury that ruled him out of the first few months of the season meant the Chelsea youngster was always playing catch up.

Gilmour was given the occasional substitute appearance by Frank Lampard as he recovered to fitness, while Thomas Tuchel went one further and started him in two of Chelsea's final Premier League games at a crucial time of the season.

One thing's for sure though - this kid has some serious talent.

And that was clearer than ever as he put in the shift of his life in Scotland's 0-0 draw against England on his first senior start, and his first competitive cap.

The Star of the Match winner was gearing up for round two against Croatia, knowing a win would take the Tartan Army into the knockout rounds - a quite incredible achievement.

But Gilmour's Euro 2020 journey came to grinding halt as he tested positive for Covid, leaving him to watch on from self-isolation as his team-mates were convincingly put to the sword by the advancing Croatians.

It wasn't the ending that Gilmour wanted, but those 76 minutes at Wembley have sparked a new story - what next for the man who has just turned 20?

Well, Gilmour could be forgiven for thinking that he's earned the chance to compete a regular spot in Thomas Tuchel's first-team.

However, recent reports suggest that won't be the case, with the increasing likelihood of a season-long loan move away.

Premier League new boys Norwich were the first club to be linked with a temporary move for Gilmour.

But now the Daily Record claim Rangers boss Steven Gerrard is hoping he can tug on the Scot's heartstrings as a boyhood Gers supporter and former academy player.

Should Chelsea keep hold of Billy Gilmour this summer? Have your say in the comments below

Gilmour would be a shoo-in for the Scottish Premiership champions, and would no doubt gain a lot under the tutelage of Gerrard.

It's thought that while Chelsea boss Tuchel is a huge admirer of Gilmour, he is willing to let him go out on loan for the season as he doesn’t feel the Scot is ready to be a first-team regular.

Scotland and Liverpool legend Graeme Souness disagrees though, arguing that Gilmour should have Jorginho running scared for his place.

Souness thinks that Gilmour's development will be better aided by staying at Stamford Bridge and learning from a higher quality of player, even if it means he won't start every week.

"I’d personally keep him at Chelsea. I think Jorginho has to be looking over his shoulder," he told Sky Sports.

"He’ll be challenging him more than anyone else. I look at Phil Foden at City and Pep didn’t let him go out on loan.

"I learnt to think quicker, to improve my touch, move the ball quicker and just being around winners, Chelsea have got bundles of them, that will improve him more than playing in a lesser team where it’s a battle every week. That’s how I see it, Phil Foden is an argument for that.

"He was willing to take the ball in tight areas, there was so much to admire [against England]. I was concerned about the tempo of the game and was thinking he’d blow up but he didn’t.

"He showed real character and wanted to be the boss on the pitch. That’s at 20 years old at Wembley in a team that didn’t do well in their first game.

"If that’s his level he’s going to be a fabulous little player."