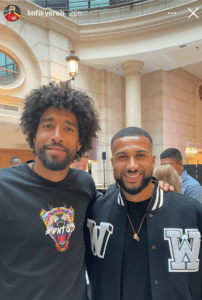 Kyereh attended the "LIFE AFTER FOOTBALL" event in the French capital where he met and interacted with the Brazilian centre-back who now plays for Nice.

Cover star Dante was invited to the hotel "Marriott Champs-Élysées" in the French capital for the publication of the new issue of "LIFE AFTER FOOTBALL" Germany - and St. Pauli's offensive man also stopped by, had himself photographed, and posed with Dante.

Kyereh gave a little insight into the event on Instagram.

Kyereh is set to leave St Pauli in the summer following the club’s failure to secure Bundesliga promotion.

The 26-year-old has been attracting interest from several Bundesliga sides following his outstanding campaign in the just-ended season.

The Black Stars attacking midfielder is valued at 3 million Euros, according to Transfermarkt, in figures last updated in December.

But the former Wehen Wiesbaden's star's stock has risen in the last five months and could be valued at around 5 million Euros.

With Freiburg leading the race for the midfielder's signature, the Europa league contenders for next season will be expected to pay the said amount for the services of the Ghanaian.

This will make him the most expensive transfer in recent times, and currently, he is the most valuable player in the squad.