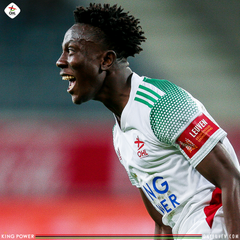 Sowah signed his first professional contract with Leicester City on 31 January 2018, tying him to the club until the summer of 2022.

The 21-year-old is in his fourth season on loan at sister club OH Leuven.

Reports from Belgium are that it will be the budding midfielder’s last season at the club given his good form in the Belgian Jupilar Pro League.

"I like it in Leuven," he told Het Laatste Nieuws. “This season I am learning a lot again under the new staff of OHL.

“It remains my intention to play in the Premier League with Leicester.

"When? As soon as the sporting bosses there are of the opinion that I am performing sufficiently strongly to be able to cope with the high level there."

Sowah has registered 5 assists and netted 8 goals in 32 outings in all competitions for the side so far this season.