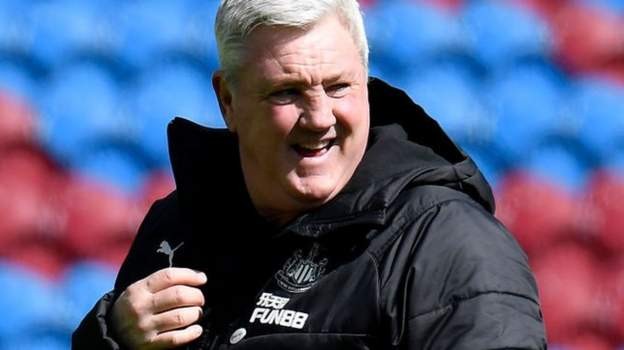 But the Magpies were back out again by the time Bruce was getting stuck into his "apple pie and custard" thanks to Aston Villa's 3-1 victory.

This Sunday, it was Allan Saint-Maximin who served up a treat as he scored and set up a goal in a 2-1 over Burnley which puts Newcastle six points clear of danger.

On a freezing day where Turf Moor was surrounded by April snow, it felt like a decisive turning point in Newcastle's season which has lurched from one crisis to another.

In addition to the overhanging prospect of a takeover, there has been a coronavirus outbreak, injuries to several key players, leaks from the training ground, accusations of Bruce losing the dressing room and bans for local journalists.

For many fans who have grown tired of Bruce and the way his team plays, it felt like the team was "sleepwalking to relegation" as the Newcastle United Supporters' Trust described it.

But through it all Bruce has retained the support of owner Mike Ashley, and after last week's unexpected comeback draw against Tottenham, Saint-Maximin helped earn a first win in 26 Premier League games where Newcastle had conceded first.

They are not safe yet, but Fulham's momentum has ebbed away leaving Newcastle a chance to pull clear from the bottom three and perhaps even contemplate whether Bruce can get the club back to where fans think it belongs.

Ever since Newcastle have been dragged into a relegation scrap thanks to their poor form at the turn of the year, Bruce has liked to talk about an "accumulation of points" in an effort to avoid the drop.

Sunday's win over Burnley was only their third in 20 Premier League games, but the real damage was done in December and January when they failed to win in nine matches. Add a damaging quarter-final Carabao Cup loss to Championship side Brentford and supporters were beginning to call for a change in management.

The appointment of assistant coach Graeme Jones from Bournemouth and a switch in tactics led to an improvement, with Newcastle losing four of their past 11 league games.

The three wins in that sequence all featured Wilson and Saint-Maximin, two of which came in three matches before they were both injured.

After his assist to set up Jacob Murphy's equaliser at Turf Moor and then his dazzling winner, Bruce said of Saint-Maximin: "Probably only Allan could have done that, and when you see games like that, you see what we have missed.

"I hope we can keep both Callum and Allan well because we are a different animal with them in the team."

The statistics bear that out. Newcastle have failed to win any of the four matches where neither player has featured, and have only won two out of 18 games where only one of the pair has featured, a win ratio of 11%.

Individually it is even more stark. With Wilson absent in nine league games, Newcastle have won none. With Saint-Maximin out, it is two wins from 13 matches.

Keeping the pair fit will be critical to Newcastle's success, this season and next.

Assistant coach Graeme Jones and manager Steve Bruce celebrate Newcastle's win at BurnleyShould Bruce be given next season to prove himself?

Bruce has admitted finding this season "testing", but has highlighted his experience of "20-odd years" in management and recent results show the team retains a fighting spirit to stay in the division despite a nadir at Brighton.

A recent poll in a local newspaper showed 95% of fans wanted a change in management, and his methods have constantly been under the microscope, ranging from his tactics through to giving players days off.

Injuries to key players such as Saint-Maximin and Jamaal Lascelles, who both had after-effects of coronavirus, plus Wilson and Isaac Hayden have all been significant. In a normal season questions might be valid about training methods although most of the problems have come during games.

Yet this season has been anything but normal. A lack of a pre-season and a shortened campaign means games have been almost constant, and plenty of other teams have suffered similar injury problems.

Add a lack of fans, which has affected all clubs but often can be a difference at St James' Park, and it is hard to judge how Bruce has fared.

As a boyhood Newcastle fan he knows simply surviving in the Premier League is not good enough. But with Wilson and Saint-Maximin a success when fit, and a mid-season nudge towards a more attacking style of play, there have been some signs of progress among the gloom.

Bruce said recently he hopes to be in charge next season, although he accepts that decision is out of his hands. Much may depend on whether the takeover happens, with Ashley still keen to sell to a Saudi Arabian-backed consortium, which has gone quiet.

Whatever Bruce's future there are huge issues to resolve at Newcastle, from board structure through to how much ambition the club has and the role of supporters. They are unlikely to be solved with a change of manager.

Bruce, who led Newcastle to 13th last term, might argue he deserves another season to prove himself given a campaign littered with unprecedented challenges.

We are here to help: Headroom can give you tools to look after your mental healthTest your Bafta knowledge: Find out how much you know about a big night for film