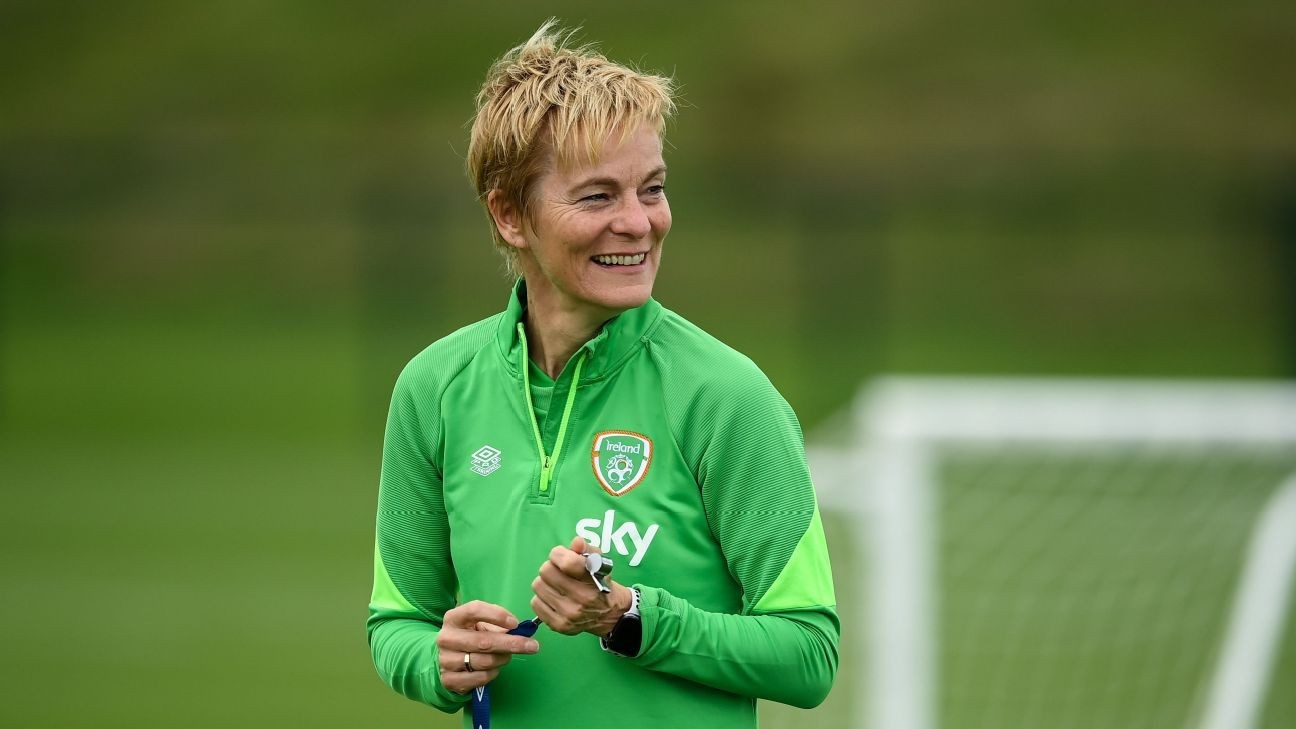 The Republic of Ireland women's football team ended a seven-match losing streak with a 3-2 win over Australia in September, and according to coach Vera Pauw, there is a direct correlation between improved player performance and the mixed gender training she introduced to the team.

Dismayed by her Ireland-based players' lack of match fitness, Pauw started organising training sessions with youth teams of local men's clubs. The former Netherlands international defender says that she introduced this philosophy to her home nation when she coached the Dutch national women's team from 2004 to 2010.

Mixed gender training, according to Pauw, has played a significant role in the Netherlands WNT's success. She views the historic introduction of Ellen Fokkema to ninth tier men's side VV Foarút's senior team last month as a natural progression of this legacy.

"When I was a player, I was one of a triplet with two brothers, so I grew up with mixed gender football, playing on the street, so I knew it was possible... It's actually the biggest achievement of my career to get mixed gender football in the whole youth and the non-performance level of men -- and now, this year, the performance [competitive] level of men [in the Netherlands]," Pauw told ESPN.

"The [women's] national team -- we all know that the Netherlands became European champions and finalists of the [Women's] World Cup. That is a direct result of that policy."

Even after seven straight defeats followed a bright start to her reign as head coach, which began in 2019, Pauw was unperturbed. She felt her players were improving, even throughout the losing run, and that she had their support.

Pauw added: "You immediately see results. Even a player like Áine O'Gorman. She's 32 years old. She just jumped up a level in sharpness and now she's in the lineup again. Every single player that's training with boys, you can immediately see that they're sharper, they're stronger, and they act faster."

The Republic of Ireland's WNT snapped a seven-game losing streak in September by beating Australia, and coach Vera Pauw says training with men's clubs has had a direct impact on Ireland's performances. Stephen McCarthy/Sportsfile via Getty Images

Furthermore, she attributes Ireland's recent downturn in results to deliberately choosing difficult 'friendly' opponents, in a bid to force her players to improve.

The former South Africa and Houston Dash coach explained: "I do not want to criticise my predecessor, but the previous coach [Colin Bell] had set the [fixture schedule] in a way that there were the weaker [opponents] and home games.

"Later, I had planned games against high-ranked opposition -- Denmark, Belgium and Iceland -- because that's the only way to get better. If you don't push yourself above your limits, then you will not grow to higher heights.

"It's easy to play a team, let's say, ranked 50th in the world and have a win, then put in your stats that you have a win. That doesn't help you to get ready for the qualification campaign... Even in those [losses], every single game, we got better. Now, in this game [against Australia], it turned our way. The moment when it would turn our way [was coming]."

Apart from a new training regimen, Pauw said her players were also boosted by the FAI's introduction of equal pay for their men's and women's national teams.

USWNT star Lynn Williams: 'If I can inspire only one person, I think I've done my job'2dKathleen McNameeAtletico Madrid's Thembi Kgatlana hopes for stability with 'dream' club48dLeonard Solms

She added: "The players have been fighting for that for a long time. My only role was bringing in a bit of strategy, because we need to realise that until recently, we only cost money -- we did not bring in any money. Now, with Sky being our sponsor, there's money coming in -- more than we cost.

"I need to give a lot of credit to the men's side of the game. The men's national team players of Ireland have handed in money and the FAI has matched that to make it possible for the players to receive equal payment.

"That, of course, is so powerful. In this case, the men had to stand up for the women to make it happen. The captain [Seamus Coleman] made that happen -- it's amazing and it's fantastic."

After disappointment in Euro 2022 qualifying, Ireland begin their 2023 World Cup qualifying campaign at home to Sweden on 21 October. Pauw signed a new two-year deal in February this year, meaning she has the vote of confidence from the FAI to lead Ireland at least through qualification for Australia and New Zealand.

Despite victory over an accomplished Matildas side, Pauw is not expecting any favours from Sweden or their next opponents, Finland.

"Now, against Sweden and Finland, it's a completely different situation [to the Australia win], because those squads will have their full teams. We still have lots of injuries, so it will be very difficult to repeat this performance," Pauw admitted.

Apart from their first two opponents, who on paper will be their strongest, Ireland will compete with Slovakia and Georgia in Group A. The winners will qualify automatically for the World Cup and the runners-up will go to the playoffs.

Ireland have never qualified for a Women's World Cup before, but at 33rd in the world rankings, only eight places behind Finland, they can rightfully feel they have a chance.