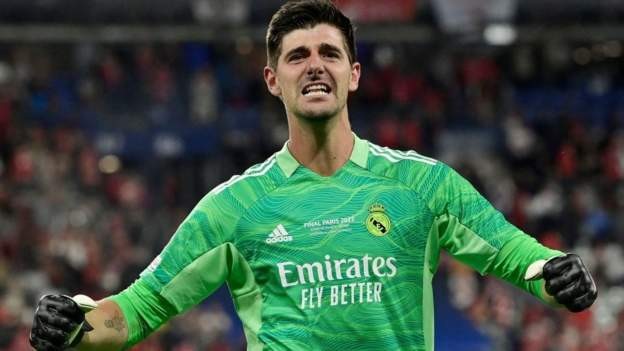 Real Madrid goalkeeper Thibaut Courtois says he does not get enough respect - having produced a stunning performance to deny Liverpool in the Champions League final.

The former Chelsea goalkeeper made several excellent saves, particularly in a first half the Reds dominated.

Vinicius Jr then scored the winning goal after the break for Real.

"I said that when Madrid plays finals, they win. I was on the good side of history," Courtois said.

"I saw a lot of tweets coming my way that I would get humbled today - it was the other way round."

Courtois spent seven years in England with the Blues - keeping 48 clean sheets in 128 Premier League appearances - before moving to Real Madrid in 2018.

The 30-year-old Belgium international won two Premier League titles with Chelsea as well as an FA Cup and has now added a Champions League winner medal to two La Liga titles with Real.

In the Champions League this season, he kept five clean sheets and made 59 saves, with a save percentage of 80.56.

"Today I needed to win a final for my career, for all the hard work to put respect on my name as I don't think I get enough respect, especially in England," he added on BT Sport.

"I saw a lot of criticism even after a great season.

"I am really proud of the team. We stuck to it and when I needed to be there I was there for the team."

Courtois emphasised Real's testing route to the Champions League trophy - they knocked out Paris St-Germain, Chelsea and Manchester City on the way to the final.

"We beat some the best clubs of the world. City and Liverpool were unbelievable this season," he said. "They fought to the end in the Premier League, Liverpool won two cups and they were really strong.

"We played a great game today. We had one chance and scored it."

Steven Gerrard, who captained Liverpool to the Champions League title in 2005, said on BT Sport: "If there wasn't respect on his name, there will be now.

"He was the best player on the pitch. Liverpool didn't do a lot wrong. They just came up against a top goalkeeper and defence."