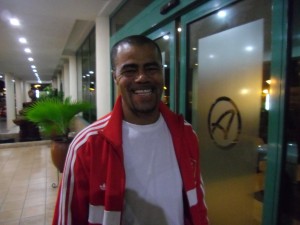 The Englishman arrived last month for a second stint with the 2011 Premier League champions after being forced to resign following a health problem.

The 50-year-old is back with full vigour and looking forward to winning more laurels with club despite losing a stuttering start to their campaign in a 1-1 draw with Mighty Jets.

He won his first silverware in the off-season GHALCA Glo G8 Cup.

GSN: Thank You and welcome back to Ghana

SP: Thank you too and it feels really great to be back

GSN: So tell us why you chose to come back to Ghana upon the numerous places you could have been

SP: The reason why is because first and foremost I had a health problem while still having a couple of years left on my contract with Chelsea. So now that the illness is sorted out with my heart in perfect condition, I believe I owe it to the club and needed to come back to finish my job.

GSN: For people who do not know much about Steve Polack, could you please briefly describe yourself?

SP: Well my full name is Steven George Polack and I am English born in Birmingham. My mother is English and my dad is from the West Indies which is close to Jamaica.

I have three sisters and many nieces and nephews. I am not married but in a relationship which is almost like marriage and I have two children who will be in Ghana later in the year. GSN: Can you please walk us through your professional life, be it as a player and as a coach?

SP: Itâ€™s strange really because I played in Finland for just a year to get a better experience to return to England but I ended up staying there because I really liked the football.

During my time there (10 years) I managed to win two bronze medals, two Finish Cups, played in the Uefa Cup and Cup Winners Cup where I played against Abedi Pele while he was at Marseille.

I even changed shirts with him and was so refreshing to see him in coaching when I first arrived in Ghana but he didn't remember me but we constantly keep in touch.

GSN: So which club was your first when you arrived in Ghana?

SP: It was King Faisal in 2007/2008 where the year before I came in the nearly went on relegation. In my first year though we finished 6th and in the second we were fourth in the league.

GSN: So why do you think they got relegated last season and how does it make you feel?

SP: I donâ€™t know why they have gone down but everywhere you go people ask you what is happening with your team. It is not nice at all because when I was leaving the club I knew they had signed very good quality players so I honestly donâ€™t know why they went down but I hope they are able to bounce back quickly to where they belong.

GSN: So now back at Chelsea how long have you signed?

SP: It's a one year contract and we'll see it from there because I have decided now I am just going to go year-by-year due to my family and no disrespect to Ghana they attend Finish schools and such schools are not here in Ghana.

GSN: Do you think you could have won the league with Chelsea had you been here last season?

SP: Honestly I don't know but I felt after my initial time at the club the signs were really showing. They had good players, a very sound management and the discipline was good so I wasnâ€™t surprised at all when they won it last year.

GSN: Now that they are League champions which earns them automatic qualification to next season's Caf Champions league, I am sure you know by now that there are going to be huge expectations at the club?

SP: For me it doesn't bother me much because in life you create your own pressure. We don't need to worry now about the Champions League because we have up until January next year to start our campaign in Africa so we have to take things step by step.

I will infuse this in my player's heads and even mine that we need to take things slowly. Remember this is going to be the first year for the club in Africa and as such its going to be a learning year.

I am not making excuses already, I would really like to win the Champions League because at the end of the day it also enhances my CV but we also need to be realistic. GSN: Will you consider your stay here a failure if Chelsea are unable ti retain its league title?

SP: The second year is always harder and I am not saying last year's wasn't difficult. The second year is very hard to retain the championships everywhere in the world and this poses a challenge but a sign of champions are the ones who keep playing regardless of whether your are losing or not.

Every team meeting Chelsea in the coming season would be like a cup final because everyone wants to beat the champion.

GSN: I don't know whether you have been briefed but over here we are getting ready for an off-season tournament involving eight teams, is that a tournament you are eying to make a clear case of your arrival?

SP: Yes of course, for sure. Because as a coach I am looking to win everything on offer, be it the league, the champions league or the gala or whatever competition.

Itâ€™s also like a stepping stone because if you win it people are going to pay really good attention. With the league, when you lose your first game it is not that much of a big deal because there is a long season ahead but with games like these, every result counts.

GSN: So what credentials do you come to this job with?

SP: They call it 'Top of the Tree'. It is called the Pro Diploma which you cannot get higher than. What I have to do is that every three years I have to do fifteen hours of work so I can renew the license. I have done the license C, B , A and even goalkeeper coaching and all that.

GSN: So what message do you have for the Chelsea fans?

SP: I can say it feels good to be back and I am looking forward to seeing and hearing from them or both. Support means support your team be it good or bad because you cannot win every game.

I want to win every game but we know that is not possible, even the best teams in the world lose games but we need the support which is very important in football and weâ€™ll do all the best we can to deliver the required results.

GSN: Are you here to be a champion?

SP: I wouldn't be here if not. Of course I am here to be a champion

GSN: Thank you very much

SP: It was my pleasure to speak with you.