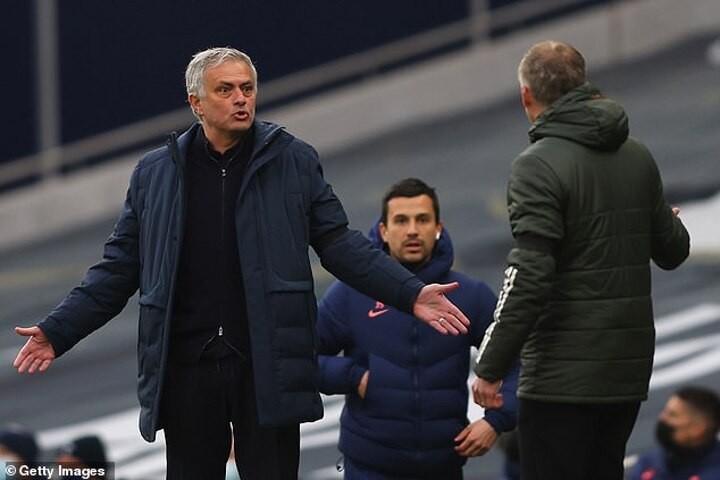 Jose Mourinho believes Paul Pogba was lucky to escape a red card during Tottenham's defeat by Manchester United - and once again savaged VAR.

The home team's Champions League hopes were left in tatters in north London with United mounting a second-half turnaround, spurred on by a disallowed goal.

When questioned over the reasoning behind Scott McTominay being penalised, Mourinho instead turned his attention to the failure to punish Pogba instead.

'My opinion, it was a good game, my opinion, we didn't deserve this result at all, but we lost against a very good team,' said Mourinho.

'We were unlucky because maybe Paul Pogba should get a red card from an elbow on Serge Aurier.

'So maybe if we're going to talk about VAR we have to go deeper.'

Pogba caught Tottenham full back Aurier in the early stages of the fiery clash with a stray elbow but no retrospective action, or booking, was shown to the United man.

The frustration quickly shifted to Ole Gunnar Solskjaer's men, however, after Edinson Cavani's neat finish was controversially chalked off.

Heung-min Son collapsed to the turf clutching his face after being caught by a hand from McTominay and referee Chris Kavanagh was advised to check his VAR monitor.

Having viewed several replays of the incident, Cavani's goal was ruled out.

The latest string of divisive decisions from the technology even rendered Mourinho speechless post-match.

'It's very difficult to analyse, even as a coach, many, many times I don't know.

'It's difficult, you don't celebrate as a goal because you are afraid.

'Sometimes you see the lines they put on the pitch, not in this game, but then you don't know very well if it is onside or offside.

'It's difficult, but to speak about that after a defeat, I don't feel really comfortable.'

Son added insult to injury after slotting home at the far post to send the hosts into the interval narrowly head.

But Fred, Cavani and Mason Greenwood all found the target in a superb second-half turnaround as United tightened their grip on second spot.

Tottenham, meanwhile, now find themselves six points adrift of the top four with pressure continuing to mount on the under-fire Mourinho.