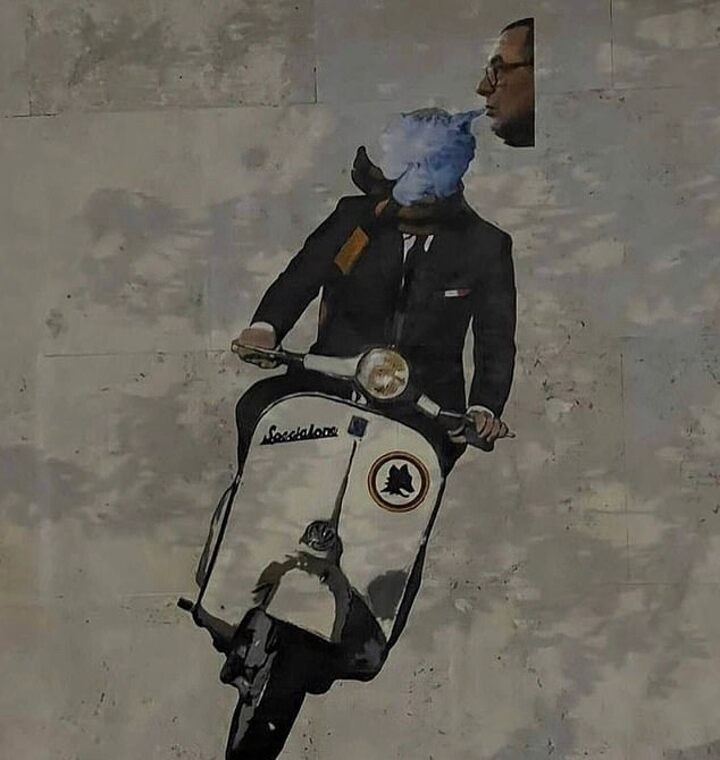 A mural of new Roma boss Jose Mourinho has been vandalised by Lazio supporters - who have put a face of their new head coach Maurizio Sarri over the artwork in the Italian captain.

Giallorossi fans painted an image of 'The Special One' riding a Vespa on a building in Rome, after the iconic Portuguese manager joined the Serie A club at the start of May.

But fellow former Chelsea manager Maurizio Sarri was appointed as Lazio manager, Roma's arch-rivals, this week - and the Biancolesti fans put an image of Sarri smoking into Mourinho's face over the artwork.

The pair will manage their rival teams for the first time next season and will do battle in the two Derby della Capitale clashes at the Stadio Olimpico.

Both Sarri and Mourinho clashed once in the Premier League while they were managers of Chelsea and Manchester United respectively.

After Ross Barkley's last-gasp goal earned Sarri's Blues a draw with United in October 2018, Mourinho violently scuffled with one of Sarri's assistants who taunted him after the goal.

Mourinho praised the influence of the Roma supporters when he joined the club on May 4, with the fans paying their respects to the 59-year-old by painting the mural.

The former Chelsea, Tottenham and Manchester United boss said after his announcement: 'The incredible passion of the Roma fans convinced me to accept the job and I cannot wait to start next season.'

Sarri, meanwhile, was announced as the new Lazio boss on Wednesday after signing a three-year deal with the Serie A club.

Lazio teased the Italian coach's arrival by tweeting out emojis of cigarettes, a clue that Sarri will be the manager taking over from Simone Inzaghi - who is now at Inter Milan.

The 62-year-old, who has been out of a job since being sacked by Juventus last summer, has been seen smoking on the touchline during his managerial career and is said to smoke up to sixty cigarettes a day.

Sarri and Mourinho are not the only two new managers at the upper echelons in Italian football, with many of the teams at the top undergoing a managerial merry-go-round.

Antonio Conte left Inter last month which led to Inzaghi's appointment, while Gennaro Gattuso was sacked by Napoli and has since taken over at Fiorentina.