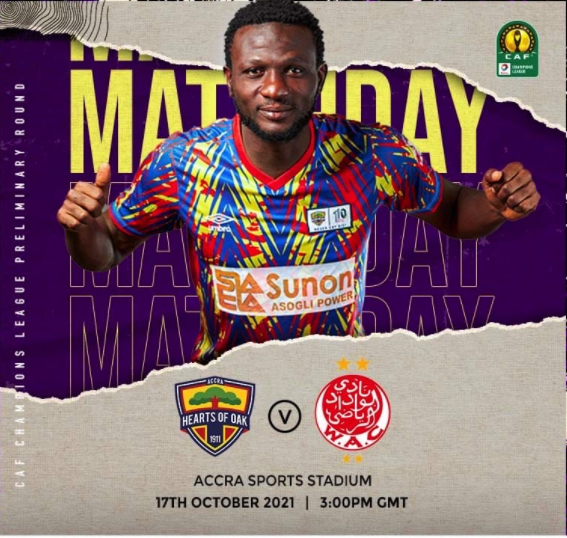 Follow the Live updates in the CAF Champions League preliminary round game between Hearts of Oak and Wydad Athletic Club of Morocco at the Accra Sports Stadium.

Hearts of Oak Communication Director, Kwame Opare Addo, has said the team is prepared to face Wydad Athletic Club of Morocco in the first leg of the CAF Champions League this weekend.

The Phobians defeated CI Kamsar in the preliminary round to set up this clash with the 2016 CAF Champions League winners.

According to Opare Addo, Hearts of Oak have been preparing for the game after their win against CI Kamsar and will be ready to face the North African side.

“After the Kamsar win we were back to business to make sure we keep our focus and our mental strength in the highest level so that when we face WAC we will be able to put a smile on the face of every Phobian.”, he said in an interview.

“We have been working on that and by Sunday the technical team will have corrected any mistake so we will be able to perform well”, he added.

Meanwhile, Waydad Athletic Club (WAC) of Morocco will arrive in the country later today ahead of their game against the Ghana Premier League champions on Sunday to be played at the Accra Sports Stadium.

2000 fans will be allowed to watch the game at the Accra Sports Stadium in this crucial first-leg tie.

Sekou Wieh Konneh from Liberia will work as the Match Commissioner while Ghana’s Christiana Baah serves as COVID-19 Officer.

15’ WAC are resulting to the long balls

Richard Attah to the rescue after a counter attack

20’ Randy Ovuoka has picked up an injury and has been substituted. William Dankyi takes his place

36’ CHANCE: Daniel Afriyie Barnie has fouled by the goalkeeper but referee ignores calls for a penalty

43’ Goal ooooo Isaac Mensah puts the home side in the lead. He taps in from a cross from Salifu Ibrahim.

We done with the first half.

48’ Afriyie Barnie goes down to the ground. Complains about his shoulder. Temporal hold up

60’ Hearts of Oak dominating possession at the moment

Double substitution for The Phobians

76’ Poor officiating from the referee in this game

The Angolan referee has been extremely poor in this game