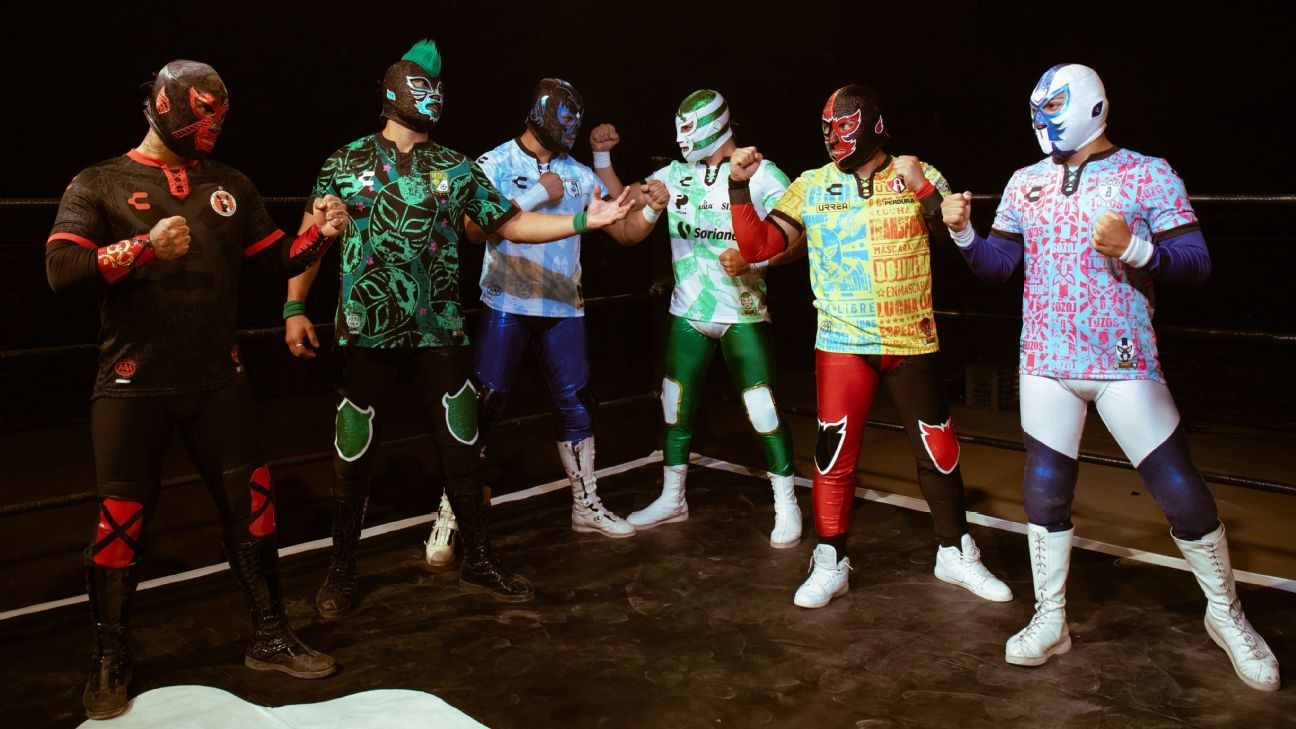 Dramatic, controversial and often blurring the line between sport and entertainment, it's easy to find common ground between Liga MX and lucha libre, the style of wrestling that has masked fighters performing stunning acrobatics that is one of the country's most colorful exports. But what happens when you combine both ideas into one concept?

In recent years, the designs for soccer kits have got increasingly adventurous -- think Tottenham Hotspur's "cosmic" jersey that they wear on the road this season, or Manchester City's paisley shirt that helped them top ESPN's Premier League kit ranking last term -- but in general they are still a long way behind the razzle dazzle of outfits from the wrestling world.

Mexican kit manufacturers Charly has done its bit to change that, merging two of the nation's most celebrated and beloved forms of entertainment. In a collaboration with Lucha Libre AAA Worldwide, a professional wrestling promotion based in Mexico City that is celebrating its 30th anniversary, Charly has released some spectacular third kits for six Liga MX clubs during the 2022 Clausura season.

Atlas, Leon, Pachuca, Queretaro, Santos Laguna and Tijuana are the clubs participating in Charly's "From The Ring To The Field" project, and the kits all contain vivid and striking lucha libre imagery. The results are stunning, on a par with the special series of kits the same manufacturer released in 2020 to celebrate Mexico's Dia de los Muertos.

The designs were first revealed in December, and Santos Laguna were the first team to wear their special lucha libre uniform in a match when they clashed with Tigres last week.

Thinking outside of the box -- or the ring, if you will -- Charly also created six new masked wrestling characters, one for each club. Check out the six contenders below, then choose your fighter! (You can buy these kits here.)

A brawler faithful to his origins and his people, who prevailed for generations through their devotion to the red-and-black in their hearts. El Academico's priority is to maintain the essence of the sport where love for aesthetically pleasing, yet effective, lucha libre reign supreme. As a grappler who prioritizes style, he might also be a fan of Arsenal as well as Atlas.

It seems appropriate that the most daring design belongs to the reigning titleholders. Plastered with text in the classic style of promotional wrestling posters, Atlas' brilliant kit will easily stand out when it's worn in the 2022 Clausura. Before last season, Atlas' die-hard supporters went a full 70 years before seeing their team lift another Liga MX trophy in late 2021. Under coach Diego Cocca's organised and efficient style of play, a second championship in a row could be within the team's grasp.

From the historic Arco de la Calzada (the emblem of the city of Leon), Leonidas stands tall as a guardian of the region. Each bout in the ring for Leonidas is an opportunity to showcase that a lion is in fact as brave as he appears. With his uncompromising presence, regional pride and distinctive hairstyle, he's the Carles Puyol of the wrestling world.

Leonidas and eight stars representing eight Liga MX titles are both on display here in a vibrant black-and-green configuration. With three finals appearances and one Liga MX championship since 2019, Leon are one of the gutsiest and bold Mexican teams in recent years. After narrowly losing out a trophy last season, the club will be sure to come roaring back in these kits.

As seen in his countless battles with competitors, the pride of Queretaro -- known as Los Gallos Blancos (The White Roosters) -- was born to fight. Resistencia Eterna's presence above others in the ring is a reminder to those that when the rooster crows, people rise up.

Alongside the mask of Resistencia Eterna, this blue-and-white jersey also features images of rooster feathers, a reference to the team's nickname. Despite once (briefly) having Brazil great Ronaldinho on its books in the 2014-15 season, Queretaro is one of a handful of top-flight clubs that is yet to win a Liga MX title. We'll see if this kit will catch the eye of another marquee player that could help it clinch that first trophy.

In the state of Hidalgo, where Pachuca's academy produces some of the best young players in the country, a new legend is born with the introduction of Super Tuzo. As the "Icon of the Windy Beauty," Super Tuzo proudly represents the city of Pachuca and reminds all opponents that the air is his ally, so expect plenty of wild dives off the top rope.

Influenced by old-school promotional posters, Pachuca's bold blue-and-pink design is covered with pop art-style stamped images of Super Tuzo. Like all the other jerseys in this line, this one also contains a luchador mask-like collar on the front. Founded by English miners in the late 1800s, Pachuca is the oldest club in Mexican soccer. Well-known for developing exciting young talent, we'll likely see at least a few promising stars-in-the-making sprinting down the field wearing these flashy jerseys this season.

In a short amount of time, the desert's Espiritu Guerrero has made a name for himself as a fighter for all. Empowered by the support of thousands within the Comarca Lagunera region of northern Mexico, the wrestler and his team share a common goal: fight until you win.

Coupled with a prominent image of Espiritu Guerrero, Santos Laguna's faded green-and-white design is reminiscent of the sun shining brightly on the desert city of Torreon. Santos Laguna's "Warrior Spirit" is one of the main reasons why the club tends to always punch above its weight, transforming itself from middling newcomer in the 1980s to 21st Century title-contender. With three Liga MX championships since 2012, another could be just around the corner for the side that regularly defeats the league's traditional giants.

Like the club he represents, Rey Xolo is one of the youngest competitors in his field, but folklore states that his soul inhabits and governs in Mictlan, an Aztec underworld. In this mythical land, he is protected by a revered pack of canines that are known as Xoloitzcuintles. He might not be a championship contender right now, but he'll be fighting in the knowledge that every dog has its day.

With Rey Xolo front and centre, Club Tijuana's traditional colours of red-and-black are on display here in a strong design for Club Tijuana Xoloitzcuintles de Caliente, more commonly known as Club Tijuana or Xolos. Founded in 2007, Club Tijuana is one of the newest teams in Liga MX. After finishing last in the 2021 Apertura tournament, these jerseys might give the club a much-needed extra bite that it's looking for. No strangers to trying out new ideas, Tijuana and Charly also made headlines in 2019 for their Star Wars-inspired kit --- which of course, included Stormtroopers walking out on the pitch to help with the unveiling ahead of a match.

All images courtesy of Charly