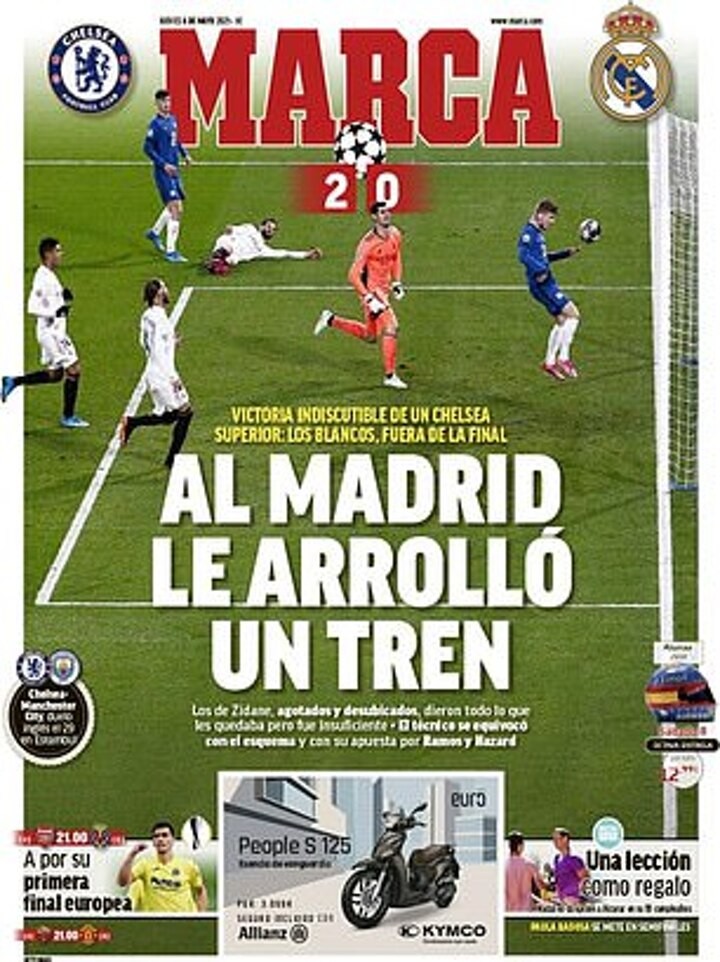 Real Madrid have been slammed by Spain's sport newspapers on Thursday following their Champions League exit at the hands of a dominant Chelsea.

Marca, AS and Mundo Deportivo were among the big-name publications tearing into Zinedine Zidane's men, after they crumbled at Stamford Bridge and were unable to stop Chelsea winning 2-0 to book their spot in the Champions League final.

Marca's headline read: 'Madrid rolled over by a train', as they slammed Zidane's 'exhausted and out of place' squad, also taking aim at the boss' tactics, saying Sergio Ramos and Eden Hazard shouldn't have started the game.

Mundo Deportivo, meanwhile, led with the headline: 'Shaken and out on the street', saying that Real 'didn't measure up' to their 'superior' opponents.

They go as far as to say that Madrid's 'future is uncertain', with president Florentino Perez unlikely to be happy at the failure to reach the final of Europe's premier competition.

While Real are still in the hunt for the LaLiga title, failure to win a single trophy this season would be a disastrous outcome, with Zidane's job surely on the line.

In AS, they carry the headline: 'Without strength and without the Champions League', going on to praise 'solid' Chelsea for eliminating an 'exhausted' Madrid.

AS too saved some criticism for Hazard, who they say 'didn't work in the wide position' alongside Vinicius Jnr.

There is sure to be quite a post-mortem in the Spanish media over the coming days, with Real used to going all the way in the Champions League.

Goals from Timo Werner and Mason Mount were enough to down Los Blancos at Stamford Bridge on Wednesday night, securing Chelsea's spot in an all-English final against Manchester City.