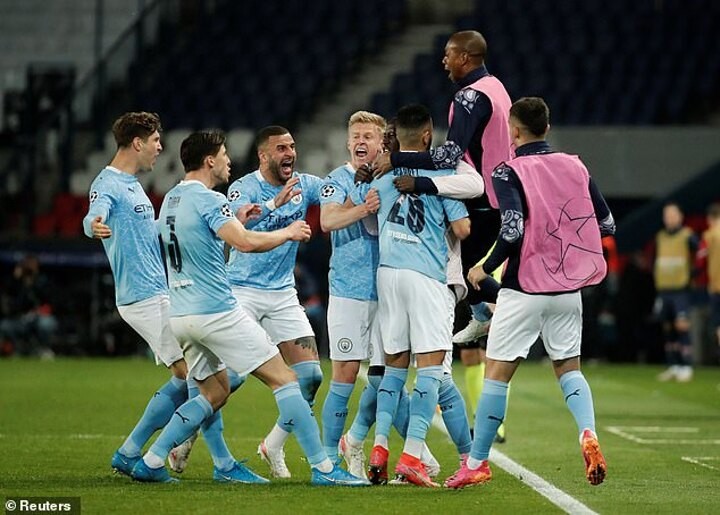 Manchester City start Tuesday night's return leg with Paris Saint-Germain as strong favourites to reach their first ever Champions League final - and history is on their side as well.

Pep Guardiola's team lead 2-1 in the tie following last Wednesday's dramatic turnaround win in the Parc des Princes and have the luxury of two away goals ahead of the encounter at the Etihad.

Kevin De Bruyne and Riyad Mahrez scored the crucial goals in Paris as City showed plenty of character to respond to an early opener from Marquinhos for PSG.

And as they look to complete the job in Manchester, there are few better omens than the perfect record of English sides who won an away first leg in Europe's top competition.

Indeed, it's a rare event indeed for a team that loses a home first leg to storm back and progress from the tie in the Champions League and its forerunner, the European Cup.

The Times have calculated that of the 319 teams to have won their first leg away from home in 66 years of competition, only eight have failed to make it through.

However, City will be wary given that three of those occasions happened pretty recently - during the 2018-19 season.

PSG won't want reminding that they lost their last-16 tie against Manchester United in February 2019 in such circumstances.

They won 2-0 at Old Trafford in the first leg but conspired to lose 3-1 at home to exit on away goals, with Marcus Rashford's stoppage-time penalty making all the difference.

It was, of course, the stunning comeback that persuaded United's hierarchy to give caretaker manager Ole Gunnar Solskjaer the job on a full-time basis.

In that same Champions League round, Ajax enacted a similar fightback against reigning champions Real Madrid.

The Dutch side lost the first leg 2-1 at home but sensationally won 4-1 in the Bernabeu to completely flip the tie on its head.

And there was another stunning result in the Champions League semi-final that year - but this time Ajax were on the receiving end.

They beat Tottenham 1-0 away from home in the first leg but then lost 3-2 on their own patch to exit on away goals. Lucas Moura scored a hat-trick, including a 96th-minute winner, as Spurs came back from 3-0 down on aggregate.

Such an occurrence has happened on two other occasions during the post-1992 Champions League era.

In February 2011, in the last-16, the defending champions Inter Milan lost the first leg 1-0 to Bayern Munich before winning 3-2 away from home to progress on away goals.

And back in 1996, eventual winners Ajax almost saw their dreams die when Greek side Panathinaikos won 1-0 in Amsterdam. But Louis van Gaal's team won the return leg 3-0 in Athens to reach the final.

The other three occasions this has happened came in the European Cup era, when the whole competition was a straight knockout.

In 1980, Brian Clough's Nottingham Forest recovered from a 1-0 loss at home to Dynamo Berlin in the quarter-finals to win 3-1 in East Germany and would go on to retain their crown.

In the 1969 quarter-finals, Ajax beat Benfica 3-0 in a tie-breaker leg played on neutral territory in Paris after Benfica won the first leg 3-1 in Amsterdam and Ajax won the return 3-1 in Lisbon.

And way back in 1955, in the first ever European Cup, Saarbrucken beat AC Milan 4-3 away from home but then collapsed to a 4-1 defeat on home territory in the return.

So only eight teams in almost 70 years of Europe's leading competition have thrown away the position City find themselves in tonight. No pressure...