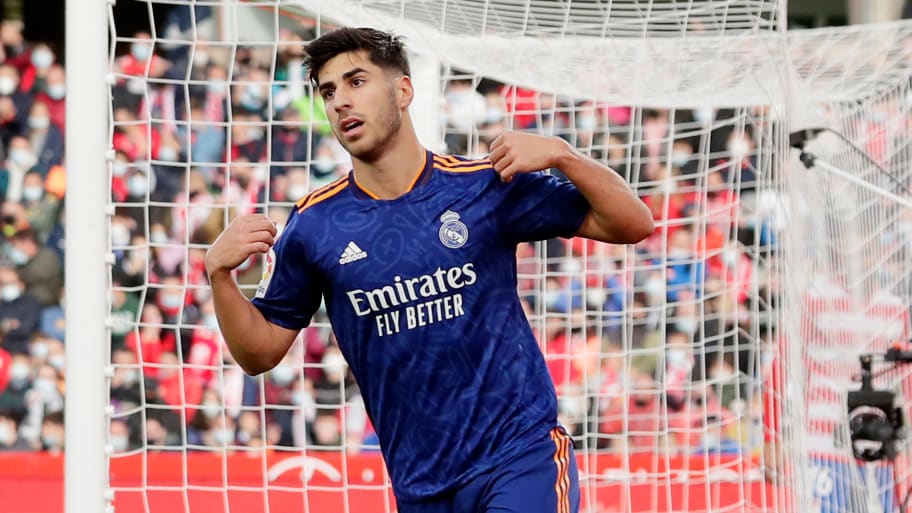 That statement would have been unimaginable and laughable throughout the the 2020/21 campaign.

Nowadays, the 25-year-old cuts the figure of pantomime villain among Real Madrid fans. Three consecutive, underwhelming campaigns for Los Blancos have tested and broken the patience of the Merengues.

On a rare rainy Sunday afternoon in Andalusia, however, the above statement was completely true as Los Blancos thumped Granada 4-1. Lining up alongside the bang in-form duo of Vinicius Jr and Karim Benzema in his side's attacking trident, it was Asensio that stole the show with the kind of creativity and threat expected of his boundless potential as a youngster.

Seemingly reignited following Carlo Ancelotti's return to the dugout, Asensio has visibly been performing with a new lease of life for Real Madrid - even if he hasn't quite yet consistently been producing a tangible output to prove it.

On Sunday, though, the forward added to his three La Liga strikes with the game's opening goal and generally looked the assured, dangerous and clinical type of player that belongs in Real colours.

From the first whistle, Asensio was the main avenue of success when building play and carving out openings upfield. With effortlessly-sharp feet and brilliantly-intelligent movement, he was a creative presence from multiple areas on the pitch - either dropping infield to find runners in behind or running the channels himself. He was key in stretching and dissecting the Granada back line.

As time progressed, his forward colleagues sharpened up and began to input their own qualities - which proved vital in the visitors running away with the game.

It was, however, Asensio that proved the most elusive and clinically impactful of the three throughout, and he got the goal that his whole performance merited to open the scoring and notch his fourth in 11 league outings - already just one behind his total tally for last season.

Collecting Toni Kroos' measured through ball, the 25-year-old raced away from the trailing defenders and showed great composure to slot past the onrushing Luis Maximiano on 19 minutes. It was a finish of someone brimming with confidence and happy in their own individual capabilities - things nowhere near associable with Asensio for the past couple of years.

It seems as though the return of Ancelotti has him rising from the ashes, The Italian's faith in the player is being repaid and, after being one of the favourites to leave the club in the summer, he has to be gradually winning the fans over this term. You'd hope so, anyway.

If he can consistently find the direct output to go with his thoroughly watchable, captivatingly creative and increasingly influential performances - as he did in his side's 4-1 thrashing of Granada - then he must be considered a part of Real Madrid's future for years to come.

This article was originally published on 90min as Marco Asensio rising from the ashes under Carlo Ancelotti .