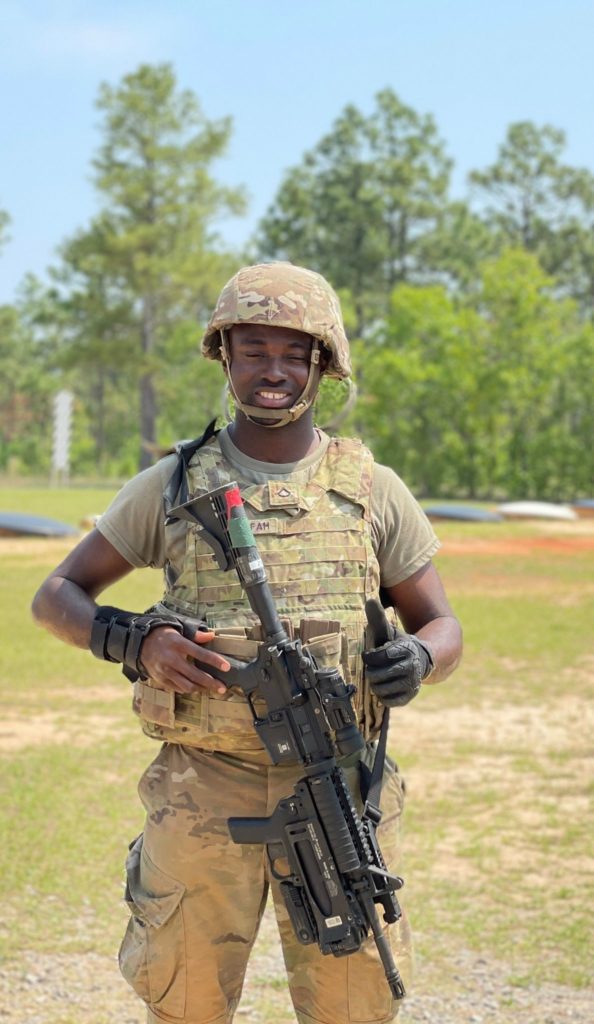 Most ex-footballers would prefer to remain in the field after bidding farewell to the sports they have served either for an extended period or short.

One would concur that a more significant portion will venture into coaching, scouting, or probably be attached to a club to take up administrative duties.

The case of former Ghanaian international and Asante Kotoko forward Mark Adu-Amofah has taken a different twist as the one-time prolific goal machine presently serves in the US Army as a ‘Specialist’ after a successful career in Ghana and a few stints in Europe and Asia.

Born in Accra and growing up in Ashaiman, plagued with crime-laden favelas, young Adu Amofah had the best of training from Mr. Adu-Amankwah, who was initially not in full support of their son playing football but instead opted he became an academia.

My mum Doris Brako was in 100 percent support of me playing soccer. 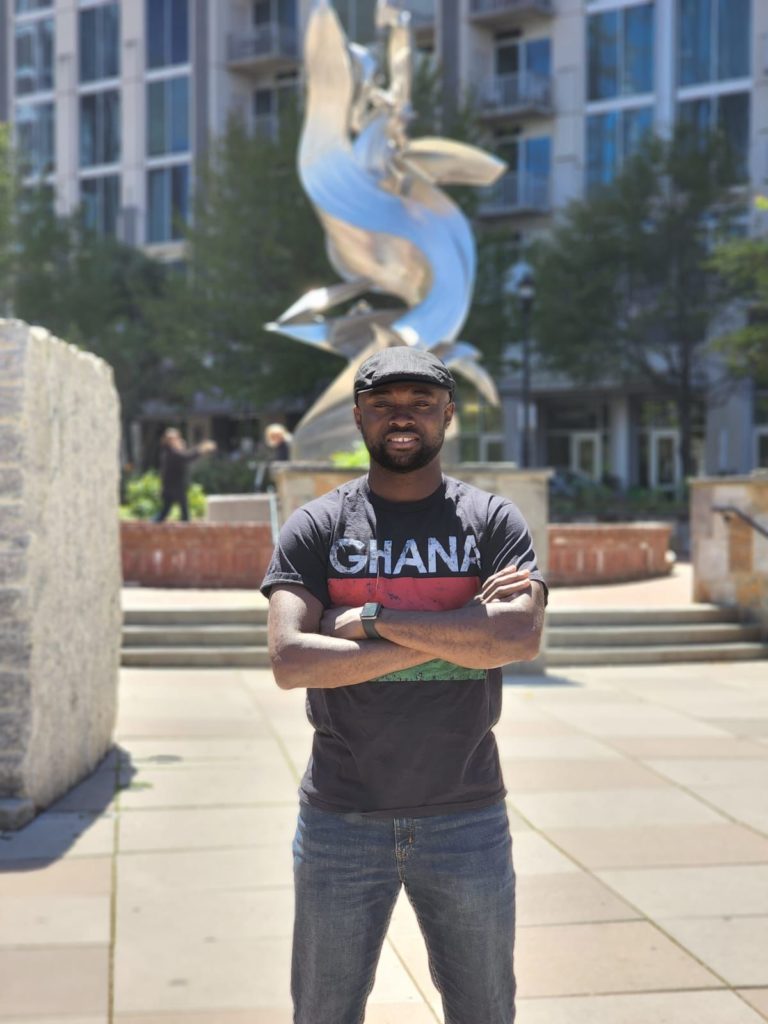 Not disquieted by the strong objection from his dad, Mark started playing on the streets and learning to live by a different set of rules in Ashaiman- a literal war zone where crime and violence are perceived to pull the strings of Society.

Such an upbringing does not leave an imprint on a person, and naturally, pursuing a career in secondary education and football are the ways out, a route to riches, fame, flashy cars, and respected status for someone growing up next to nothing to hang his hopes and boots on.

Adu-Amofah started his career with Young Brazilians, a colts team in Ashaiman at a young age before joining Fauzan FC, a second-tier side in Accra.

His consistent performances for his club attracted a lot of offers; however, the tough Adu-Amofah joined Liberty Professionals in 2002, like any young and focused footballer who was ready to take the bull by its horn, he fought his way into the first team and became the fans favorite in Dansoman.

After spending three years with Liberty, the one-time ‘darling’ boy of the late Sly Tetteh saw his journey cut short with the emergence of a new gaffer who told Adu-Amofah he was not part of his future plans and that he should seek another opportunity at a different club.

Keen on pursuing his football dreams, he joined Real Sportive on loan after playing 15 games for Liberty and bagged 10 goals.

Little did he know that when one door closes, another opens, and his short stint with Tema-based Real Sportive was the road to his greatness in Ghana football.

‘When I was told no club wants me and my only option was Real Sportive, I opted because I wanted to prove a mark to Liberty.

They had let go of a precious diamond and he punished them with goals when we faced them.

My dreams came to reality when we played against them in Dansoman; I scored against my former club’, he said.

After just a season with Sportive, the big giants of Ghana football, Kumasi Asante Kotoko, Ashanti Gold, and Accra Hearts of Oak, came knocking on his doors.

Football they say knows no boundaries, and in 2006, Adu-Amofah landed in Kumasi to continue a journey he started on a patchy note.

He was one of the most prolific goal poachers during his era.

He quickly settled and found his scoring boots on and after two seasons with the Porcupine Warriors, the one-time Liberty ‘reject’ was scoring for fun and registered a total of 21 goals in 29 in all competitions for Asante Kotoko to merit a call up into the Black Satellites (U-20) in 2006 and subsequently into the Black Meteors (U-23) where he continued with his unfinished business of scoring.

With such a feat accomplished in the local terrain, it was time to seek greener pastures abroad, and South Africa was his first destination, where he joined Bloemfontein Celtic in 2008. 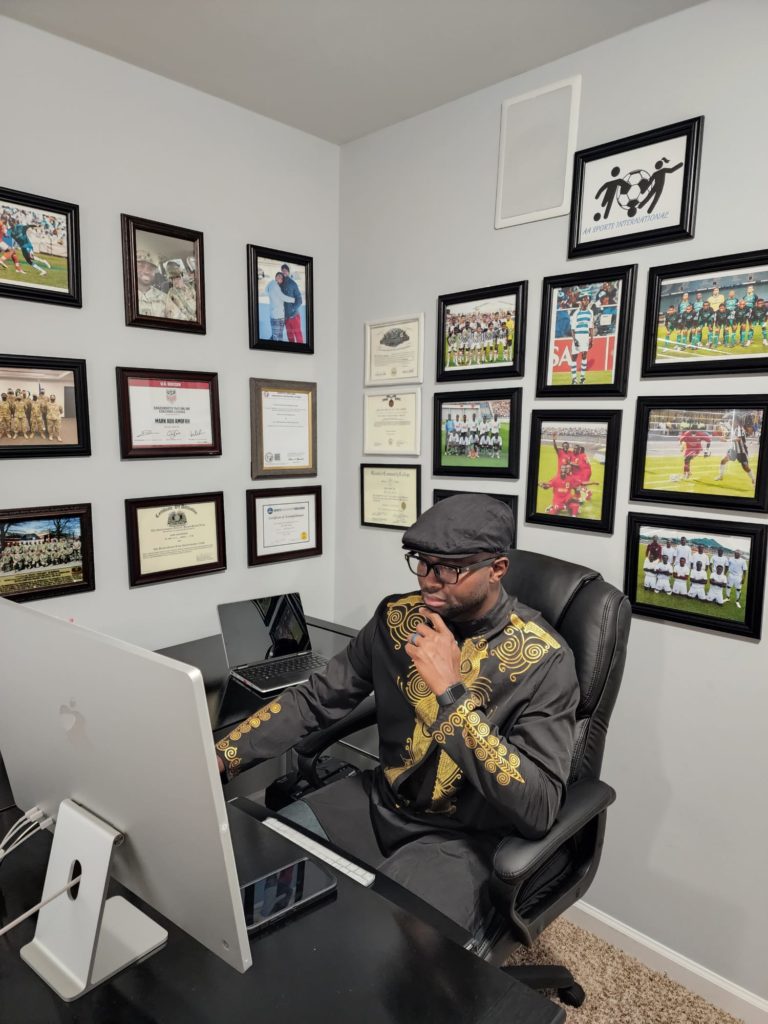 After a season, he moved to the Scandinavia lands in Denmark to play for SonderjysKE.

Adu Amofah landed a move to Israel to play for Beitar Ramla for a year and returned home to join Liberty Professionals in 2011.

After a year with Liberty, he moved to Southeast Asia (Thailand) to play for Phatthalung in 2012 before he last played for Bahrain side Sitra in 2014.

Wondering why the decision to hand up his boots and venture into a new field?

At age 34, the former Ghanaian international now serves in the US Army as a specialist.

Ironically, he called it a quit at age 27, a stage where most rise to stardom to join the top clubs in Europe and Asia and make cool cash.

However, a decision he has not regretted and continues to reiterate as one of the best he went for.

Currently based in the US with his beautiful wife, the couple are blessed with three adorable kids, a daughter and two sons who are gradually warming into their dad’s feet.

One of the few well-known ex-footballers from Ghana to join the military service, Adu Amofah describes life in the military as time-consuming and requires discipline and determination.

Notwithstanding, Adu Amofah doubles as the Founder of AA Sports International, a non-profit organization, and the Chief Executive Officer of Unique Sports Talents Worldwide, all registered in the US.

Adu Amofah is passionate about developing young talents and undertaking philanthropic works; hence, both firms will start operations in Ghana soon to develop football and give back to Society.