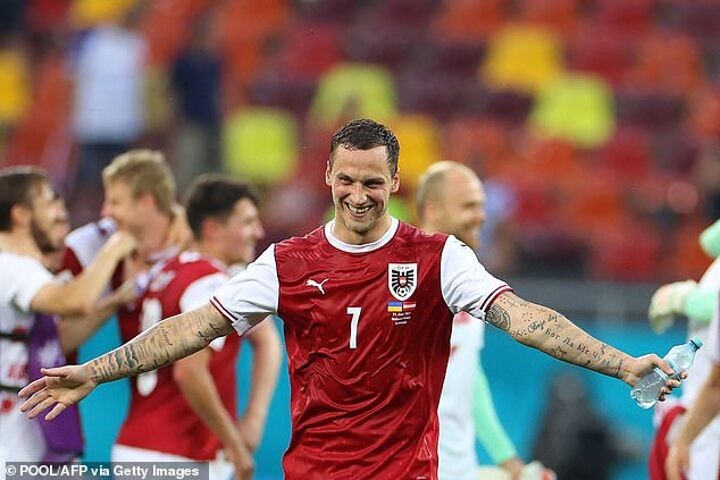 Marko Arnautovic says he is undaunted by the prospect of facing Italy centre-back pairing Giorgio Chiellini and Leonardo Bonucci at Euro 2020 despite their 'incredible' partnership.

Austria pipped Ukraine to second spot in Group C after beating them on Monday to secure a tie at Wembley this weekend with Roberto Mancini's men, who have kept 11 consecutive clean sheets.

The Azzurri topped Group A with three wins and seven goals, but Arnautovic, who served a one-match ban earlier in the tournament for offensive comments towards Leeds and North Macedonia wing back Ezgjan Alioski, told Sky Sport Italia that his team should focus on themselves rather than the opposition.

'People might make it seem bad when they say that Italy have kept 11 consecutive clean sheets, but that shouldn't matter to us. We have to play our football,' he said.

'We are facing an exceptional team, world class. You just have to look at where their players are at club level. The coach Roberto Mancini is also world class.

'The statistics of the Italy side say it all, but this is just one match, it lasts 90 minutes and we mustn't be afraid.'

Juventus team-mates Chiellini and Bonucci, who have played alongside each other in Turin for 10 seasons, have been key components of Italy's impressive form this summer.

'What Chiellini and Bonucci achieved together and how long they've been playing as a unit is incredible,' Arnautovic added.

'Being in the last 16 of a tournament like this is truly a big deal for Austria.'

Italy are in search of just their second European Championship title and their first since 1968, while Austria have reached this stage of the competition for the first time. The pair face off at 8pm after Wales play Denmark.