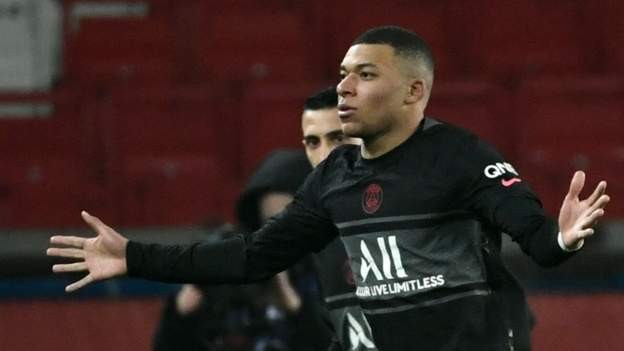 Paris St-Germain returned to winning ways with Kylian Mbappe on target in a victory over Brest that takes them 11 points clear at the top of Ligue 1.

PSG were without other stars including Lionel Messi and Neymar, but were still too good for their opponents.

Mbappe fired in the opener from the edge of the box - his 19th goal of the season and 10th in the league.

Thilo Kehrer made sure of the points with a wonderful side-footed volley from Nuno Mendes' cross.

It was the defender's second goal in as many league games following his equaliser against Lyon last weekend. He had only previously scored two Ligue 1 goals in total in 70 appearances.

The win extended PSG's unbeaten run in Ligue 1 to 12 games, but was just a second victory in the last six.

They have endured significant disruption to their glittering side, including an injury to Neymar, Messi testing positive for Covid-19, and players including Achraf Hakimi and Idrissa Gueye taking part in the Africa Cup of Nations.

Despite that, their starting XI is still the envy of the rest of France, and while not seamless, it was superior on Saturday.

They have made a habit of late of conceding first and would have done so again but for Gianluigi Donnarumma's superb save to deny Irvin Cardona following Presnel Kimpembe's misjudged backpass.

But having survived that scare, they set about taking control and took the lead through Mbappe's neat cut inside and superb low finish.

Marco Verratti struck the inside of the far post with a toe-poke effort early in the second half before Kehrer struck to give the home side a more comfortable final 35 minutes, which included a late cameo from Sergio Ramos.

Sergio Ramos (Paris Saint Germain) wins a free kick in the defensive half.

Presnel Kimpembe (Paris Saint Germain) wins a free kick in the defensive half.

Attempt blocked. Jérémy Le Douaron (Brest) left footed shot from the right side of the box is blocked. Assisted by Ronaël Pierre-Gabriel.

Attempt missed. Thilo Kehrer (Paris Saint Germain) right footed shot from the right side of the box misses to the left. Assisted by Marco Verratti.

Jean-Kévin Duverne (Brest) wins a free kick in the defensive half.

Attempt missed. Kylian Mbappé (Paris Saint Germain) right footed shot from the centre of the box is close, but misses to the left. Assisted by Marco Verratti following a fast break.

Attempt saved. Danilo Pereira (Paris Saint Germain) right footed shot from the right side of the box is saved in the centre of the goal. Assisted by Kylian Mbappé.