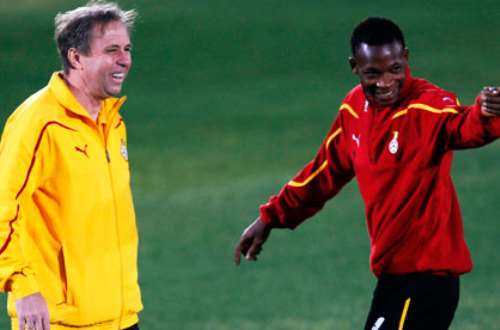 Former Ghana international John Painstil has described Milovan Rajevac as 'unpredictable' claiming the Serb is a 'very difficult coach to work with'.

Painstil knows Rajevac very well because he was part of Ghana's squad for the 2010 World Cup in South Africa.

The right-back did not miss a game as Black Stars became only the third African country to reach the quarter-finals of the World Cup.

Rajevac left his role as Ghana coach months after the tournament but got the nod last month for a second spell.

“Milovan Rajevac believes in more tactics, he looks at his opponent and builds from his side. He works on how to hurt his opponent," Painstil reacted to Rajevac's re-appointment.

“If you are a player and you listen to his instructions it works for the team. He makes sure players play to his roles and if you don’t play the way he wants he will sideline you and that’s how Milo operates”

He added, “He is a very difficult coach to work with, you can’t predict him, you will never know whether you are playing or not."