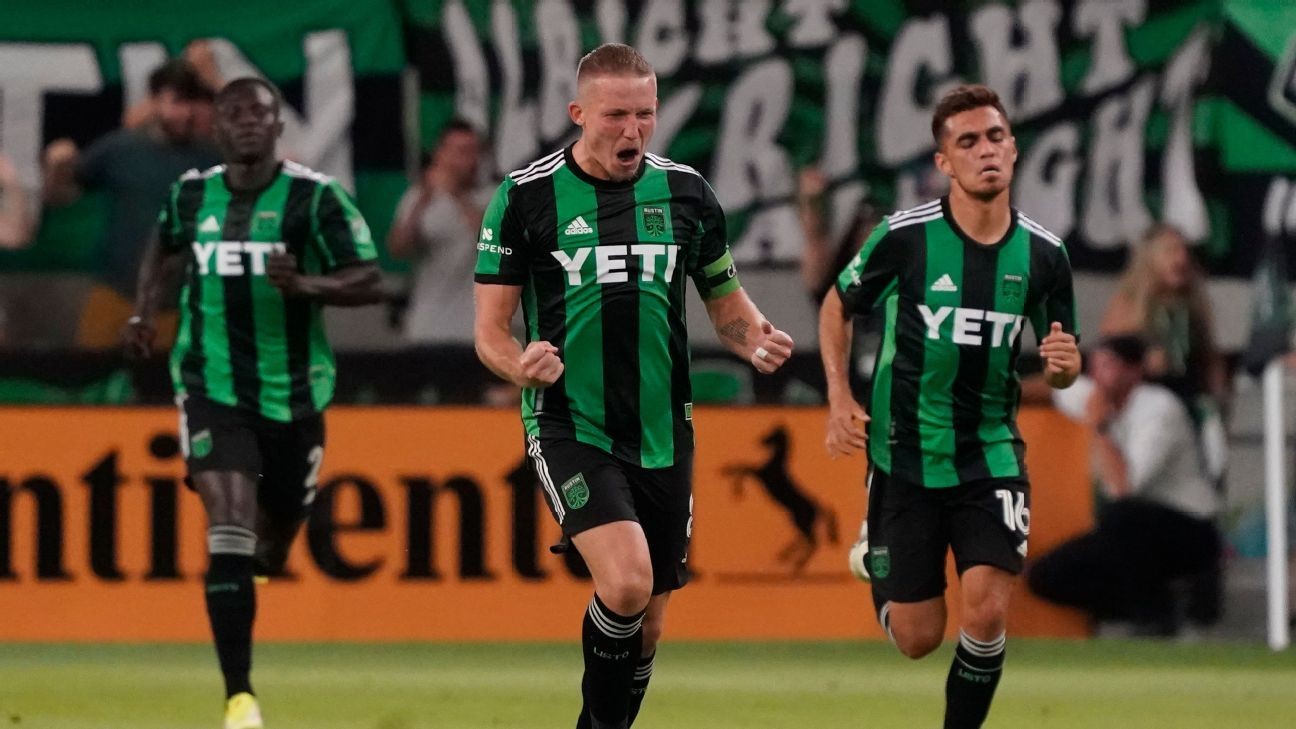 Just a week ago, on the back of fine form from FC Dallas, we pondered whether Southern California's duopoly of LAFC and the LA Galaxy could soon be threatened by the Texan trident of Dallas, Austin FC and the Houston Dynamo. The answer, following a double gameweek of action for many clubs in Major League Soccer, is a resounding yes.

And it's the Texas capital club who's leading the charge, after the Verde went to Los Angeles and picked up a win over the Black and Gold and followed it up with an unlucky draw in which Austin dominated nine-man Orlando City. Sure, Dallas endured a difficult week, losing to both the Vancouver Whitecaps (in British Columbia) and Minnesota United (at home), but Houston made up for a narrow loss to the Seattle Sounders with an impressive victory over the Galaxy in Carson, California.

With Week 12 in the books, Austin Lindberg and Danny Guerra look at the results, break down where all 28 teams stand after a wild weekend of action and bring you the latest edition of MLS Power Rankings.

Carlos Vela (still unsigned past July) looks to be finding his groove with his second goal in as many games. And grabbing a weather-delay win on the road at Columbus will help boost an already-high confidence ahead of a midweek U.S. Open Cup match against rivals LA Galaxy. -- Guerra

Neither D.C. nor Chicago present the sternest test for an MLS Cup champion, so six points from those two contests this week is no great cause for celebration for NYCFC. The Bronx Blues are on a seven-game unbeaten streak, which is impressive enough on its own, but then consider that Ronny Deila's side hasn't conceded a goal in 450 minutes of MLS play and it's hard to escape the conclusion that this New York City team is better than the one that lifted silverware last season. -- Lindberg

Philadelphia snapped a seven-game winless streak by picking up a 2-0 win at Portland, but last week also included a scoreless draw at home to Inter Miami -- its fifth straight game sharing the spoils. The Union have looked like the cream of the Eastern Conference crop for much of 2022, but the chasing pack is suddenly looking far closer than Jim Curtin will be comfortable with. -- Lindberg

Always good to salvage a result at home in stoppage time against a quality squad, but early defensive mistakes put Austin a hole against nine-man Orlando. Los Verdes still lead the league in team goals and assists but have just one win in their past four league matches -- albeit it was at LAFC. -- Guerra

Austin FC's Diego Fagundez puts one past the keeper to put them up 2-0 over LAFC.

In a match halted midway through the first half by a three-hour weather delay, it was good for Nashville to get goals from C.J. Sapong and Hany Mukhtar, but some ragged play in the back saw Nashville give up a late goal allow rival Atlanta to nab a draw. -- Guerra

In their past two home games, the Galaxy have been outscored 6-1. The defense had been much improved this season but that's offset by a lack of production from Douglas Costa, Samuel Grandsir, Efrain Alvarez and Kevin Cabral, leading to a dip in opportunities for Javier Hernandez in the box. -- Guerra

A midweek 3-3 draw with Chicago extended the Red Bulls' unbeaten run to six games, but that was snapped by a 2-0 defeat in Miami. New York is averaging one goal per game in its past seven in MLS, yet it still boasts the eighth-most goals in the league, the sixth-most chances created and the fourth-most expected goals. How? -- Lindberg

Orlando was fortunate to escape the Texas capital with a share of the spoils considering it played down a man for a half hour, down two players for 21 minutes, was out-chanced by a ratio of nearly three to one, out-possessed by more than two to one and the tale of the xG hemmed close to that two-to-one figure. -- Lindberg

Austin FC gets the late goal in extra time to earn a point vs. Orlando City.

A key road win over one of the East's better sides in Montreal, Real Salt Lake are keeping pace with the West's best. Credit to an RSL side that went down within a minute of play to mount a comeback thanks to second-half goals from Justen Glad and Sergio Cordova. -- Guerra

The Loons spoiled Ricardo Pepi's homecoming as FC Dallas suffered its second straight loss, but the Texas side shouldn't be too alarmed yet. USMNT duo Paul Arriola (four goals in four games) and Jesus Ferreira (league-best nine goals) have been excellent and Alan Velasco should back soon from COVID-19 protocols. -- Guerra

Heading into last week, Montreal was unbeaten in eight, the winner in six of those eight and emerging as a challenger in the East. Then it dropped a pair of 2-1 defeats at Nashville and at home to Real Salt Lake. Consider this a wake-up call for a team that has grown unhealthily dependent on Djordje Mihailovic, who has directly contributed to 11 goals (either scoring himself or registering an assist) in his past 11 games. -- Lindberg

Sebastian Ferreira had a stellar performance and Steve Clark was solid between the sticks again as the Houston Dynamo pounced on a struggling Galaxy side. Ahead of the international break around the corner, Houston should be pleased to be among the playoff contenders -- Guerra

Tyler Pasher cuts inside and curls in a beautiful strike to put the Dynamo up 2-0 over the LA Galaxy.

Minnesota United snapped a four-game skid at Dallas as Robin Lod scored to become the Loons' all-time leading scorer (22). Dayne St. Clair saw Dallas dominate possession and get 18 shots off, but the Canada keeper continued to make his case as one of the league's best. -- Guerra

The Colorado Rapids are now undefeated in 23 straight home games after handling a still-struggling Sounders team. The Rapids were missing Auston Trusty (red card) and Gyasi Zardes (injury) but William Yarborough was steady again in goal to stifle some late-game opportunities by Seattle. -- Guerra

After winning three and drawing one in its first five matches of 2022, Atlanta has fallen back to earth, going 1W-3D-3L in league play since April 10. The good news, for the Five Stripes faithful, is that Designated Player Thiago Almada is beginning to demonstrate why Atlanta paid a league-record transfer fee for the 21-year-old midfielder, registering three goals and three assists in his past four appearances across all competitions. -- Lindberg

Portland could have used Sunday night's game against visiting Philadelphia to bounce back from a bad loss to San Jose, but the Timbers' night went sideways early on due to a fifth-minute goal by Philly and an injury exit by Eryk Williamson 10 minutes later. -- Guerra

Sergio Santos heads home the goal to give the Union a 2-0 lead in the 48th minute.

The Revs have won three of their past six league games, a revival that's seen last year's record-setting Supporters' Shield winners re-enter the race for a playoff place. Just to illustrate how difficult the 2022 season has been so far for New England, its 3-2 win at Cincinnati was its first victory away from home all campaign. -- Lindberg

If you're a Cincinnati fan, try not to read too much into this slight drop down the order or your team's first league defeat in a month. The 3-2 loss to New England was something of an anomaly: five goals scored in a game that expected fewer than two, and conceding three goals to a team that probably shouldn't have had one. -- Lindberg

The Sounders could have clinched a third win in a week, but looked disjointed in their Mile High 1-0 loss at Colorado. The lone goal could be chalked up to a bit of bad luck and Raul Ruidiaz may have argued for a penalty in the second half. -- Guerra

Since being traded to Charlotte on May 3, Andre Shinyashiki has registered three goals in just 194 minutes of action across all competitions, including in Sunday's 2-1 win over Vancouver. He's already the second-leading goal scorer in club history, providing secondary scoring that will come as a relief to Karol Swiderski, who's shouldered the burden of Charlotte's attack throughout the expansion club's inaugural season. -- Lindberg

Inter Miami takes a 2-0 lead after Robert Taylor finishes off the well-worked chance.

Earning a point from a trip to Philadelphia and beating the Red Bulls is about as good of a week as anyone can ask for. And consider that, prior to back-to-back defeats to Charlotte and New England, Miami reeled off three consecutive wins over Atlanta, Seattle and the Revolution, and there's the beginnings of a foundation emerging in South Florida. -- Lindberg

Going back to the middle of March, Columbus has taken just six points from a possible 27. Its lone win in that time came against D.C. United. That could help explain why 11-month-old Lower.com Field looked so sparsely populated in Saturday's 2-0 loss to LAFC. (OK, maybe the severe weather warnings played a bigger role than the Crew's awful run of form, but still.) -- Lindberg

Wednesday's 3-3 draw at the Red Bulls was just the third time all season Chicago had scored more than one goal in MLS play, which is pretty inexplicable for a team whose attack consists of Xherdan Shaqiri, Kacper Pryszbylko, young DP Jairo Torres and now Chris Mueller. -- Lindberg

play0:27Heber nets the penalty for NYCFC

Heber tallies the penalty in the 23rd minute to put New York City FC on the board first.

San Jose rallied for a draw against Kansas City and now has a five-game undefeated streak (including a win over Seattle in U.S. Open Cup play). Off the field, the Quakes hired MLS veteran John Wolyniec as technical director to continue their rebuild. -- Guerra

Vancouver had to play an academy kid after all three senior keepers were ruled out. An admirable effort from 18-year-old Max Anchor (good keeper name) in a 2-1 loss at Charlotte, but the 'Caps could really benefit from overcoming the injury bug. -- Guerra

After that 7-2 loss to Portland two weeks back, Sporting KC had their second straight positive result in a 1-1 draw at San Jose. A makeshift lineup that saw Johnny Russell score provides some hope for Peter Vermes' depleted side. -- Guerra

In the first six games of 2022, D.C. earned six points. In the six games since D.C. fired coach Hernan Losada, it has taken eight points. That 1.33-points-per-game pace isn't enough to kickstart a playoff push, especially when trying to overcome a 1.0-PPG pace to start the season. -- Lindberg