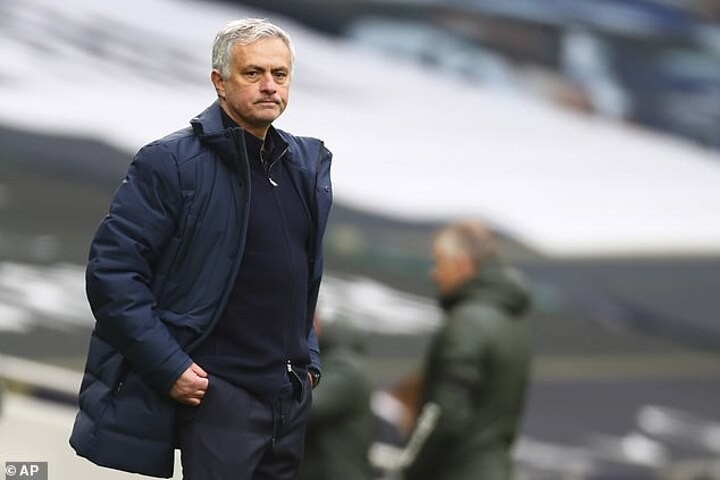 The north Londoners went ahead against Manchester United on Sunday but failed to hold onto a lead once more, as United hit back in the second-half to win 3-1.

With seven games remaining Spurs lie seventh, six points behind fourth-placed West Ham. They have been dumped out of the Europa League, and also face a tough task to end their silverware drought against Manchester City in the Carabao Cup final.

With Spurs' season sliding towards total failure, Redknapp couldn't hold back his frustration.

'What Jose has also done in this period is he's made them a really tough watch,' the former midfielder said on SkySports punditry duty.

'You can say what you like about Spurs but they always been a good football team, they're always had a style. If Spurs fans were here right now watching that, they wouldn't enjoy it one bit.

'Too often I watch this side and there's no flair there's excitement. I don't think this is a bad squad of players, I've said it before and I stand by it.

'Jose is looking at it and trying to blame everybody else, he has to take responsibility.

'Thing is with Jose for many years we all talked about a masterclass and he loved it and we celebrated it.

'When you're a good manager, you organise your team to get that result whatever it takes. When you've got good players it's a lot easier.

'If he doesn't think this is a good squad, a great manager would find a way to get them organised.'

'For them to be in a position they are right now, it's not just the financial implications for the club with the stadium and the assets like Dele Alli and Harry Winks,' Redknapp added.

'Having spent a bit of time at Spurs I know Daniel Levy will not like the fact that a lot of the players he's got are devaluing assets, he hates that.

'He wants to keep players' assets so when it comes to selling they're worth more than what you bought them for. When you just cast them aside like he does I don't think it helps one bit.'