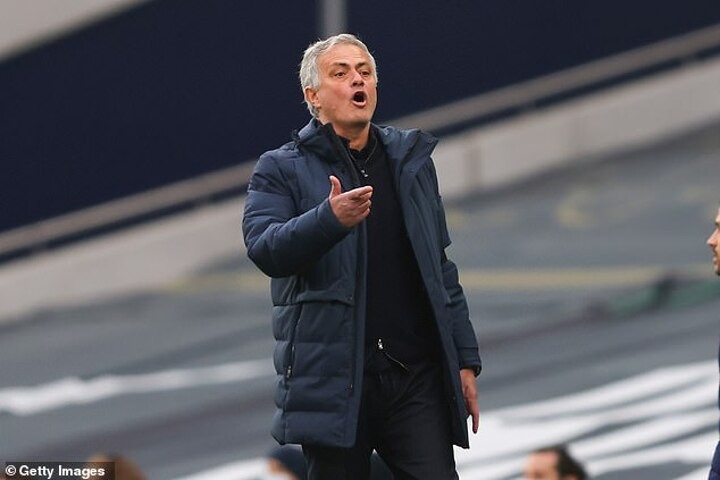 Roma's new boss Jose Mourinho has already begun planning for life in the Italian capital by reportedly putting together a shortlist of transfer candidates from the Premier League.

Mourinho, who was the shock appointment as Roma's new boss just weeks after his sacking from Tottenham, has already handed a shopping list over to the club's sporting director Tiago Pinto and is ready to build a strong and aggressive side made up of players from England.

Former Inter Milan manager Mourinho returns to Italy after 11 years away with huge motivation to usurp his former club and managerial rival Antonio Conte in Serie A with Roma.

Mourinho's Roma rebuild this summer will be helped by Portuguese agent Jorge Mendes and the former Premier League manager will insist on signing players that suit his favourite 4-2-3-1 formation.

And he is planning a raid on his former club Tottenham first and foremost, according to Corriere dello Sport.

The report from Italy claims that Mourinho holds Spurs' Eric Dier, who he transformed into a defender in north London, in very high regard and the England international could be tempted for a new experience in Italy.

Dier is viewed as a low-cost option by Roma and after much time playing in the heart of defence under Mourinho in north London, could prove invaluable in his favoured 4-2-3-1 formation.

Mourinho is reportedly also a great admirer of fellow Tottenham star Pierre-Emile Hojbjerg, who at 25 years of age is regarded as a good purchase due to his physical and technical ability.

The Serie A outfit are also in the hunt for a midfielder who can link up closely to the attack following what has been a tough season in Italy - with the club also on the brink of crashing out of the Europa League at the hands of Manchester United.

And Roma are eyeing a move for Juan Mata, who is set to become a free agent in the summer with United deciding not to renew his contract at Old Trafford.

Mourinho worked with the Spanish midfielder at both Chelsea and United in England, and is interested in getting him to Italy in order to bring some much-needed quality and experience to what is a young Roma side - to help the likes of Nicolo Zaniolo and Lorenzo Pellegrini flourish.

Furthermore, winger Cengiz Under is likely to return to the Stadio Olimpico following the termination of his loan deal with Leicester at the end of the season.

Under suits Mourinho's 4-2-3-1 formation and is a player who would have been wanted by Mourinho at Spurs if he hadn't chosen Leicester, according to Corriere dello Sport.

Under will likely be joined back at the club by Justin Kluivert, who is ready to return to Rome following a season-long loan spell in Bundesliga with RB Leipzig.

The 22-year-old winger is another youngster who is highly admired by Mourinho, and could play a vital role going forward in the Italian capital.