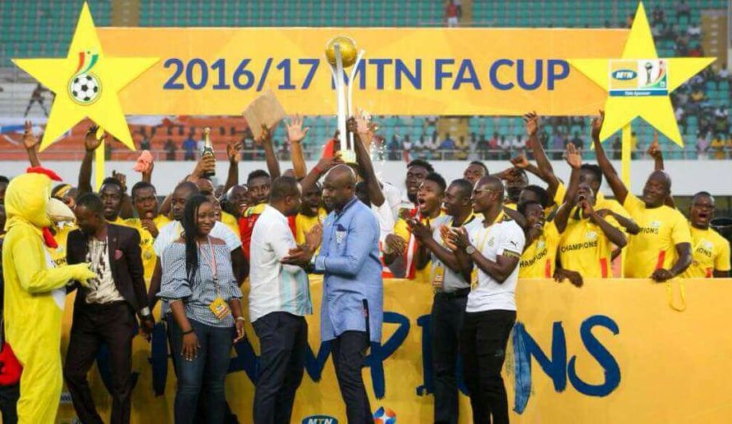 Former Asante Kotoko goalkeeper Isaac Amoako has disclosed that only 20 players received the Ghc 5000 promised by then Chief Executive Officer of the club Dr Kwame Kyei in their triumph over Hearts of Oak in the 2016-17 MTN FA Cup.

Dr Kwame Kyei, now Board chairman of the Porcupine Warriors promised to reward the entire team Ghc 5000 if they beat their arch-rivals.

The game played at the Tamal Sports Stadium saw Asante Kotoko beat Hearts of Oak 3-1 kind courtesy of a hattrik by Sadick Adams and Thomas Abbey with a consolation goal.

However, after the game only 20 players out of 30 were rewarded.

Amoako, now retired said the decision to only reward 20 players brought a lot of confusion to the team.

“I always feel like crying when talking about this but it was like the treatment was so bad because it is true. Speaking the truth is the right thing. It’s so sad", he told Sunyani-based radio station Nimde3 FM.

“It was about an FA Cup finals we played against Hearts of Oak at Tamale. We won by 3 courtesy Sadiq Adams. The promise that came from the Board Chairman, Dr. Kwame Kyei then CEO was that each player would be given Five-thousand Ghana Cedis.

"We were thirty players and what makes it sad is that from that thirty players some played only one game out of six especially Sadiq Adams played in the finals only and those who spent much time in the FA Cup, playing continuously about five games and missed only the finals due to something but he promised all of us for that package".

“After the win, he called all the team at a certain hotel with money(5000 cedis times 20) and when they mention your name you go for it. After that 20 players who played in the finals were given the money but the other ten did not receive some of the money and Sadiq immediately stood up and asked the chairman about promising a thirty players but why only twenty…? He questioned.

“Dr. Kwame Kyei replied that the money was shared according to the list given to him and I also stood up and told him that Dr. ‘this is the promise you made and it was reiterated by our coach and the money has been just shared so if it can be returned back but it should be done like given the larger part to those who played in the finals so that all of us can get some of the money for everyone to calm down.

“Kotoko always pay winning bonus to eighteenth players but this promise was made during the start of the season and specifically you said thirty players and at least they should leave it to us and the technical team to decide how it should be shared but what came in from Kwame Kyei was that he can’t reverse anything but next time every player should work hard to be in the team and left after saying that.

“There was a quarrel between some of us including Atta Kusi and Mohammed after that statement.

“The truth is that the money was shared on Monday and the next day we heard our PRO talking on a certain radio station in Kumasi. I listened to the interview. It was a thanksgiving to them for giving the players such bonuses and PRO Obed also said it is true, all the thirty players have received theirs.

Talking about this they might think I’m saying this because I didn’t get some of the money and if I’m owning someone the person may chase me because the person may think I’ve received a bonus.

“There was a legend program on Ash FM doing a discussion about Kotoko players who have been in the team for continuous ten years without any move. We were five players and there was an interview on why I’ve been in Kotoko for a long time and after the show the host intentionally asked me to dash him something because I’ve taken a bonus and I said no . I revealed the truth to them.

“After telling the truth I was invited to the office the next day on my way to training and they gave a letter that my contract has ended, they can’t continue with me so I should return anything that belongs to Kotoko".

“They didn’t reply my response but I didn’t want to get any issue with them because I’ve captained the team for three years and I love the team and I was doing a coaching job whilst I was playing and there was a possibility that I could return for a different job. That’s what happened.”