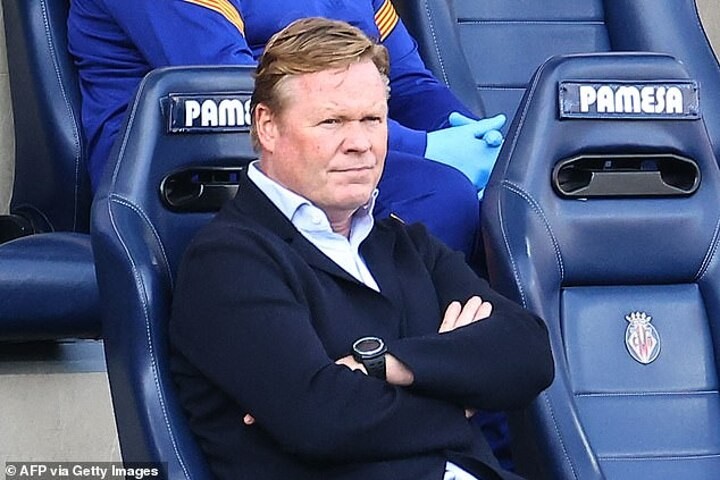 Judging by the satisfied grin on Ronald Koeman’s face yesterday afternoon when he left a long lunch with Barcelona president Joan Laporta, he did not get his P45 for desert.

The two men left in the same vehicle after a two-hour summit and are understood to have discussed a possible road map for this summer, pending the result of various club audits to ascertain the exact financial position the club finds itself in, and pending Koeman staying.

His position was not officially ratified by Laporta after the meeting. In part that is because the Dutchman’s contract runs until the end of next season so the normal thing would be for him to continue.

It’s also because while Laporta does not want to sack the former club playing legend, and has no viable alternative lined-up right now, neither has he been entirely convinced by him.

Laporta was at the Ciutat de Valencia stadium on Tuesday where he saw Barcelona surrender a 2-0 lead. It was the third match in which Barça could have gone top by winning and failed to do so.

There is a feeling that Koeman has lacked bravery in his decision making in the last few weeks, clinging to a back-three with wing-backs system and taking off match-winning players to try to hold on in games.

Koeman feels that his style of management this season has been conditioned by the squad made available to him last summer, hence lengthy discussions about how the group can be made more competitive for next season.

Koeman wants Memphis Depay and not Sergio Aguero. The compromise looks like being the arrival of both if Barcelona can free up room in the squad by selling Martin Braithwaite, and Philipp Coutinho.

Midfielder Miralem Pjanic and full-back Junior Firpo will also be ushered out and Koeman still wants to bring in another of his former Dutch internationals, Liverpool’s Georginio Wijnaldum. The club will complete the signing of Eric Garcia from Manchester City but want to replace Samuel Umtiti with a left-sided centre-back who will be able to play more games.

All transfer manoeuvring will take place against a backdrop of two of the most important decisions to be made in the club’s recent history: the renewal of Lionel Messi and the borrowing of more money to stabilize the club’s position as it comes out of the pandemic and reopens its door to spectators and tourists.

El Mundo Deportivo reported on Friday that new CEO Ferran Reverter is working on a 500m euros credit to stabilize the club's finances.

But both that loan and a new deal for Messi are being held up by the results of four audits ordered by Laporta when he took over as president and which should be completed at the end of his month.

Messi has communicated to the club that he wants to stay but his loyalty will still need to be bought with the right contract and with a commitment to strengthening the team as much as is possible in the current climate.

Thursday’s head-to-head between Laporta and Koeman will not be the last and there are difficult decisions ahead. The union formed between the two is largely a result of Xavi Hernandez and Pep Guardiola being unavailable to join Laporta.

Koeman knows he was brought in by the last president and that he has overseen the team’s self-destruction in the league. But he also feels responsible for the emergence of a clutch of promising young players and he wants to take them into a second season which begins with a settled Messi and stronger squad.