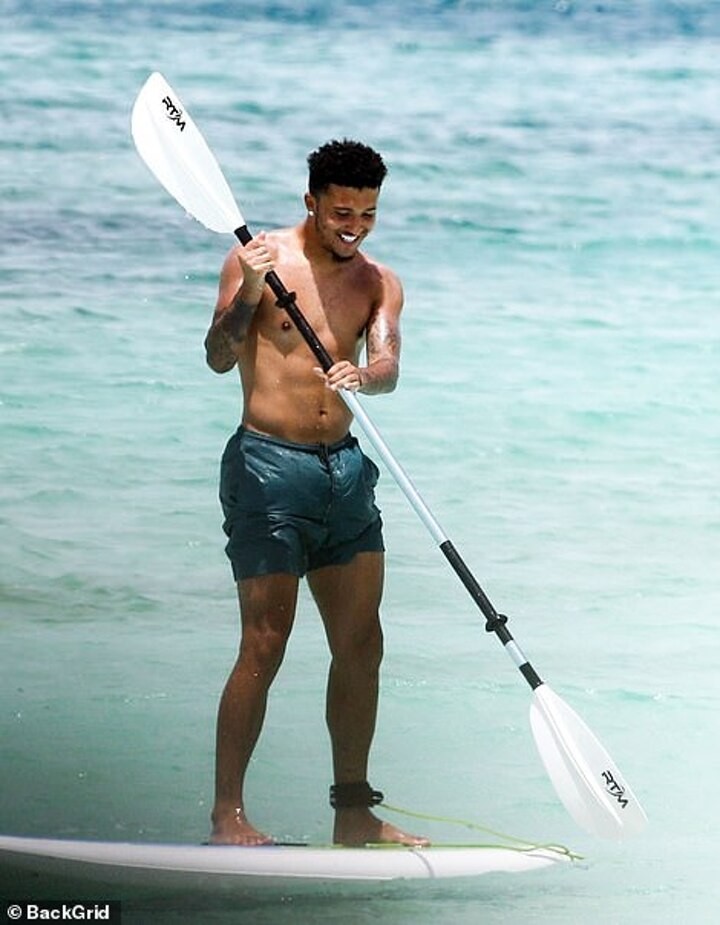 They jetted off together via private jet to sun-drenched Turks and Caicos earlier in July.

And Jadon Sancho and his close friend and 23-year-old teammate Marcus Rashford were spotted making the most of the Caribbean islands' balmy weather on Friday, when they spent the day at the beach with friends.

Sancho could barely stop smiling as he tried his hand at a spot of paddleboarding in the ocean's crystal clear waters, and it's no surprise considering the 21-year-old signed a £73million deal with Manchester United on Friday.

Rashford - who welcomed his England teammate to the club in a tweet reading 'welcome brother' minutes after the news was announced - stayed on the shore and was seen chatting away to friends while looking fresh in a crisp white T-shirt and matching shorts.

The England stars were joined at the beach by a group of male friends - including Krept of rap duo Krept & Konan - as well as three glamorous women, with one of the stunners thought to be 31-year-old Krept's ex Sasha Ellese.

The stunning women reclined on the beach, with two donning string two-piece bikinis and another -thought to be Sasha - dropping jaws in a floaty black cover-up.

In February, Krept announced his split from long-time partner Sasha, eight months after they welcomed their daughter Nala together.

Sancho and Rashford appeared to be enjoying their much-needed break after England's loss on penalties to Italy in the Euro 2020 final earlier this month.

Three days after England's 11 July defeat, forwards Sancho and Rashford flew to Providenciales, a picturesque island in the Atlantic Ocean.

The island is on the UK Government's green list meaning they won't have to isolate upon their return to the UK.

The players are thought to have travelled with a rapper called Chibz Artist.

Rashford is thought to have recently split up with his girlfriend Lucia Loi after eight years together, while Sancho is not known to currently have a partner.

It comes hours after United announced the £73million signing of Sancho on Friday afternoon, with Ole Gunnar Solskjaer finally getting his man after trying and failing to sign the starlet last summer.

Sancho declared 'this is my club, this is where I belong,' in his unveiling video, as negotiations with Borussia Dortmund were finally completed after the star player underwent a medical at United's Carrington base last week.

Having joined Borussia Dortmund from United's rivals Manchester City in 2017, Sancho went on to score an emphatic 50 goals in 137 appearances for the Bundesliga giants.

It's a signing, in terms of calibre, position and playing style, that United have been screaming out for, and the youngster's new team-mates are also clearly delighted, immediately jumping to social media to welcome the new signing.

Fellow England international Maguire was also quick to welcome the new signing, while Fernandes had a message both for Sancho and the United fans.

He said: 'Welcome to the club Jadon Sancho. I look forward to playing together. Old Trafford are you ready?'

Sancho is United's second signing of the summer, after Tom Heaton sealed a return to Old Trafford from Aston Villa in a free transfer.

Sancho thanked his former side Dortmund with the deal now complete, also insisting a move to United is a 'dream come true'.

He said: 'I'll always be grateful to Dortmund for giving me the opportunity to play first team football, although I always knew that I would return to England one day.

'The chance to join Manchester United is a dream come true and I just cannot wait to perform in the Premier League.

'This is a young and exciting squad and I know, together, we can develop into something special to bring the success that the fans deserve.

'I am looking forward to working with the manager and his coaching team to further develop my game.'