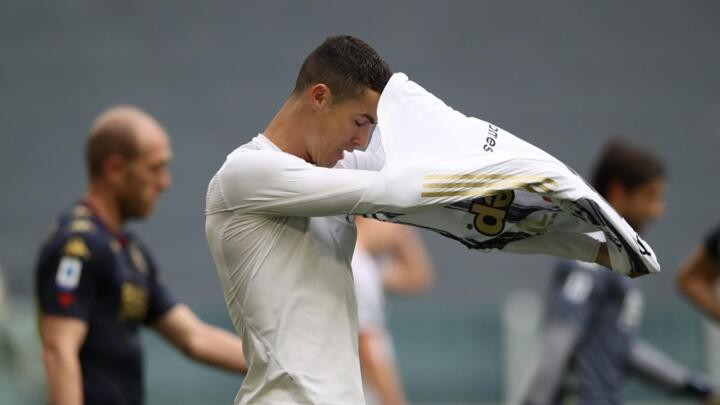 Cristiano Ronaldo was not happy after failing to score in Juventus' win over Genoa, but Andrea Pirlo said that was understandable.

Andrea Pirlo had no issues with Cristiano Ronaldo throwing his shirt on the ground after failing to score in Juventus' Serie A victory over Genoa.

Dejan Kulusevski, Alvaro Morata and Weston McKennie were on target as Juve took another step towards sealing a Champions League spot with a 3-1 win at Allianz Stadium on Sunday.

Ronaldo has found the back of the net 32 times for the Bianconeri this season, but cut a frustrated figure after he was unable to add to his tally in Turin.

The Portugal captain struck the post in the first half before Morata followed up to double Juve's lead and hit the target only twice in six attempts.

Ronaldo whipped off his shirt and hurled it on the turf following the final whistle and head coach Pirlo had no problem with that reaction.

Pirlo said: "He was keen on scoring. He is one of the champions because they always want to leave their mark, but these are normal things that happen."

Juve came under pressure after dominating the first half and were in danger of losing their lead following Gianluca Scamacca's goal early in the second half.

Pirlo was concerned by the manner in which they let Genoa come back into the game.

He added: "It all seemed easy, at the end of the first half we suffered an opportunity due to lack of concentration.

"It had happened to us in other games, it could cost us dearly. We entered the field wanting to play the game but we sat back."

Paulo Dybala had to once again settle for being introduced as a substitute after coming off the bench to score in a huge win over Napoli amid speculation over his future.

Pirlo defended his decision not to start the playmaker, who spent a lengthy spell on the sidelines with a knee injury.

The former Italy midfielder said: "I'm lucky enough to coach the champions and Dybala is one of them so I try to be able to make the most of him in every game.

"We didn't have him available very much this year, now he's back and it will help us to give us a hand in this final rush. The managers are there for these decisions."