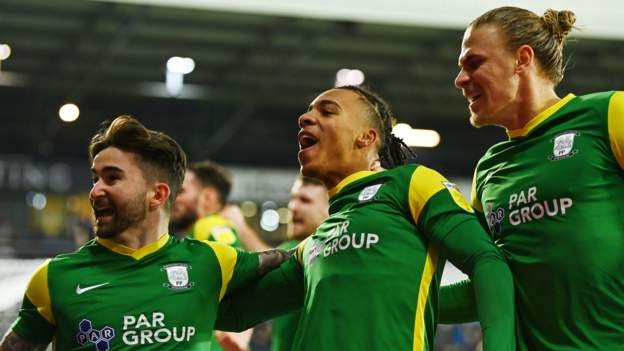 Emil Riis Jakobsen poked Preston in front from almost on the goalline after Greg Cunningham's ball into the box took a deflection off Kyle Bartley.

Albion failed to register a shot on target as they lost at home in the league for the first time this season.

But, for delighted Preston boss Ryan Lowe, who went to salute the travelling fans at the end, it was a great night as his side bounced back from their first defeat under him at Swansea on Saturday.

Johnstone not selected over 'internal issue'

To add to an already unsettled mood of fans' discontent at The Hawthorns, Albion went into the game without England goalkeeper Sam Johnstone.

He was due back after a three-game ban but he was left out over an "internal issue" by under-fire Baggies boss Valerien Ismael, who also revealed that he will not be considered for selection for Saturday's trip to Millwall.

The taking of all three points - Preston's first at The Hawthorns since the days of only two points for a win in the old Division Two back in September 1973 - was built round a fine hard-working, defensive performance which lifted them two places in the table to 13th.

Albion had rallied late on against Peterborough on Saturday to score three times in the last 11 minutes for a 3-0 win.

But, once on-loan Aston Villa striker Archer had marked his debut with his first league goal, there never looked likely to be a repeat of that sort of finale from a limp Albion attack, badly missing injured New Year's Day signing Daryl Dike.

"We deserve all the criticism for that. It was a poor team performance. I agree with all the boos.

"We have no excuses. We were never in the game. We deserved to lose. When you put in a performance like that, you have to accept it.

"We didn't put in the energy or effort to win that game."

"We had an issue internally. It is solved now but that is the reason he wasn't in the squad and won't be on Saturday but after that he will be back."

Attempt missed. Callum Robinson (West Bromwich Albion) right footed shot from outside the box is too high following a corner.

Callum Robinson (West Bromwich Albion) wins a free kick in the attacking half.

Grady Diangana (West Bromwich Albion) wins a free kick in the defensive half.