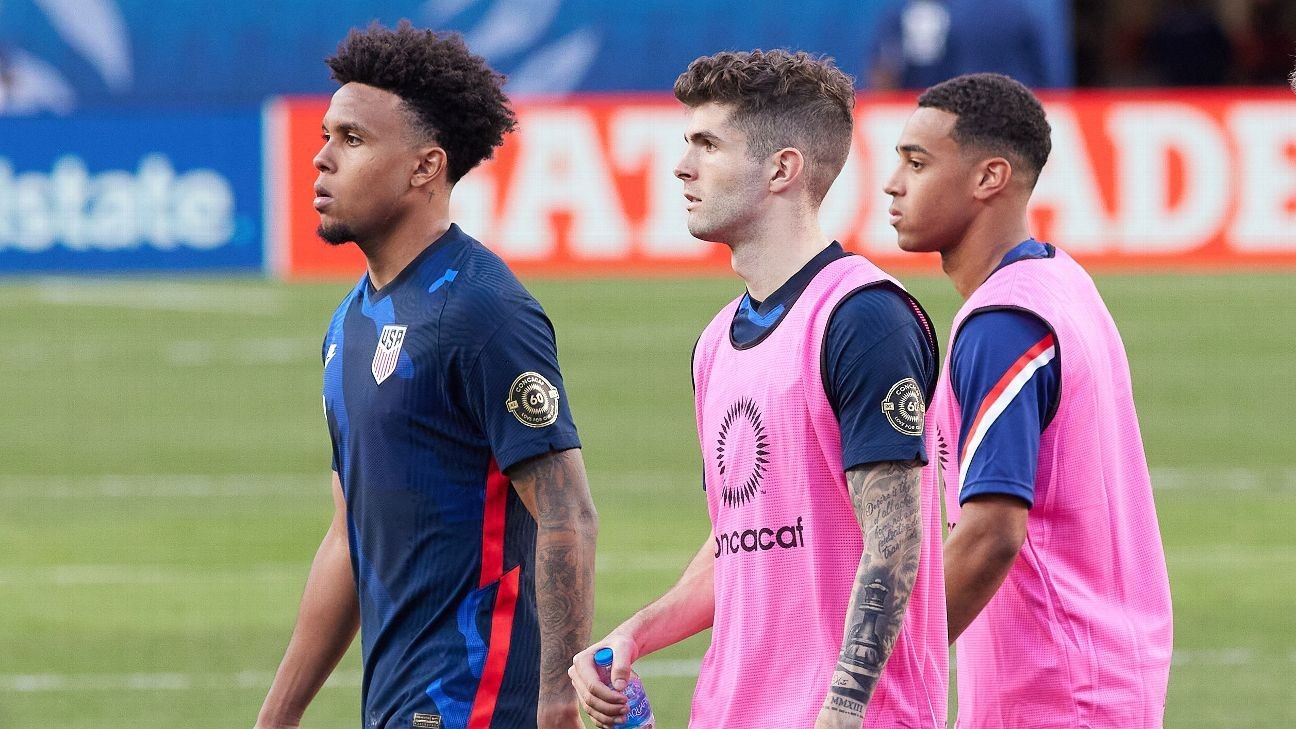 After a two-month break, the United States men's national team resumes World Cup qualifying with a game against El Salvador in Columbus, Ohio (Thursday, 7 p.m. ET; stream LIVE on ESPN2, ESPN+). It's the first of a pivotal three-match window that includes a trip to Canada on Sunday before returning home to play Honduras in St. Paul, Minnesota on Wednesday.

Through eight of 14 matches, the United States is in a good position to qualify for Qatar 2022, but there is still lots of work to be done. With 15 points, the team sits a point behind first-place Canada and a point ahead of Mexico and Panama. Three teams will receive an automatic bid, while the fourth-place finisher in the region will play a one-off match against the winner of the Oceania Football Federation (likely New Zealand) in Qatar in June.

On paper, El Salvador at home projects as one of the easiest games the United States will have throughout the entire cycle. The Americans are 18-1-6 all-time against El Salvador and have never lost to the Cuscatlecos in World Cup qualifying (5-0-4), but a win is not a given: the U.S. was held to a 0-0 draw on the road in the first match in September.

El Salvador has just one win (Panama at home) in eight matches and sits seventh out of eight teams. With six points, the team isn't mathematically eliminated, but it's far enough back where a draw is of little help. How that impacts manager Hugo Perez's approach remains to be seen, but in the case the game remains level in the later stages, both teams will be incentivized to chase the winner.

United States manager Gregg Berhalter said Wednesday he doesn't have a predetermined rotation mapped out for the three-game window and that the team's priority is to get three points against El Salvador. While allowing for the possibility that anything a coach says about his lineup before a game could involve some level of gamesmanship, the implication was that he'll field his best possible starting XI on Thursday.

With that in mind, here's a look at how the United States could line up against El Salvador and what factors are in play.

After Matt Turner allowed three goals while starting the first five matches of qualifying, the New England Revolution goalkeeper was dropped in favor of Zack Steffen for the last three games against Costa Rica, Mexico and Jamaica. Berhalter indicated Steffen's ability to play the ball with his feet led to the decision, but it doesn't appear he'll have a real choice to make this time around -- certainly not against El Salvador. As of Wednesday afternoon, Steffen remained with his club, Manchester City, getting treatment for back stiffness.

While Berhalter said Steffen's status was "day to day," it's probably safe to assume Turner -- who has been linked with a possible transfer to Arsenal -- will be between the posts for the next three games. Turner went the full 90 minutes in the United States' 1-0 win in a friendly against Bosnia and Herzegovina in December and has not played a competitive match since the Revs were knocked out of the MLS playoffs by eventual champions New York City FC on Nov. 30.

Sean Johnson, who came up big in penalties to help NYCFC win the MLS Cup, figures to serve as the backup, while 17-year-old Chicago Fire youngster Gabriel Slonina is also in camp, though in what should be viewed more as a development opportunity.

Matt Turner sheds some light on his love for soccer and the reason he started playing the game in the first place.

The curious case of John Brooks' exclusion remains a noteworthy talking point in the back, but the reality is the center back pairings without the VfL Wolfsburg man have been quite good throughout qualifying. Both Walker Zimmerman and Miles Robinson have been excellent for the USMNT and Chris Richards has been starting regularly for Hoffenheim, where he is playing on loan from Bayern Munich. Mark McKenzie is an option, too, but it will likely be some combination of Richards/Robinson/Zimmerman against El Salvador with the possibility for rotation among those three against Canada and Honduras.

Antonee Robinson has developed into the unquestioned first-choice left back and -- especially considering the lack of natural left backs on the roster -- could be asked to start all three matches. On Monday, Robinson said he didn't think playing three matches in seven days would be an issue, and was hopeful that would be the case. On the other side, Sergino Dest is the obvious choice despite his struggle for playing time recently at Barcelona. His creativity in attack could be the key to unlocking defenses as the U.S. heads into three matches where it should have the bulk of possession.

DeAndre Yedlin -- who terminated his contract with Galatasaray on Thursday -- is not expected to arrive in Columbus until Wednesday due to weather-related travel issues leaving Turkey, so without a training session his availability against El Salvador remains in doubt. If Yedlin is unavailable, then Reggie Cannon should be the next man up, with surprise inclusion Brooks Lennon also an option.

play2:20Is the USMNT at a disadvantage playing in Columbus and Minnesota?

Unlike the other position groups, the midfield three selects itself at this point. When Tyler Adams, Weston McKennie and Yunus Musah -- start together the team is significantly better than with any other combination. Individually, there is a wide gap between their talent levels and others on the roster, which is further enhanced by how complementary they are with each other.

Adams' ability to put out fires in transitional moments allows McKennie and Musah to focus more on pushing the game forward and linking play with the forwards. This isn't complicated. The team has won four games in qualifying with three of them (Jamaica, Costa Rica, Mexico) being the only ones Adams, McKennie and Musah have started together.

One of the more intriguing tactical elements against El Salvador will be to see the so-dubbed "MMA" midfield start the game with Christian Pulisic for the first time.

play0:57Pulisic: USMNT believe we can beat anyone

Christian Pulisic looks ahead to the USMNT's remaining World Cup qualifiers and their long-term goals.

Ricardo Pepi, who completed a $20 million move from FC Dallas to Augsburg earlier this month, has cooled off since his breakthrough performances for the USMNT early in qualifying, but remains the team's best option at striker. He is expected to start between Pulisic -- with the Chelsea winger on the left -- and either Timothy Weah or Brenden Aaronson, both of whom have been effective for the squad.

Weah missed about a month with a thigh injury he picked up in December, but returned recently for Lille and started and went 66 minutes on Saturday. Pulisic's up-and-down season playing multiple positions for Chelsea isn't ideal for national team purposes, but the most important factor with him is that he's coming into this window healthy.

The striker debate behind Pepi (or perhaps including him) features a number of players who have done just enough to stay relevant without offering a convincing case they should be with on the roster or play consistent minutes. Berhalter called in Jesus Ferreira and Gyasi Zardes (both out of season in MLS) ahead of Joshua Sargent and Jordan Pefok (in season in Europe), which opened himself up to being labeled biased in favor of MLS players. For the 1-plus-1-equals-3 crowd, there is a conspiracy afoot, but the more boring reality is that none of these players have definitively earned their place.

Considering the options in front of them, if either Jordan Morris or Paul Arriola appear, it would likely come in a substitute role -- and ideally to see out a game.